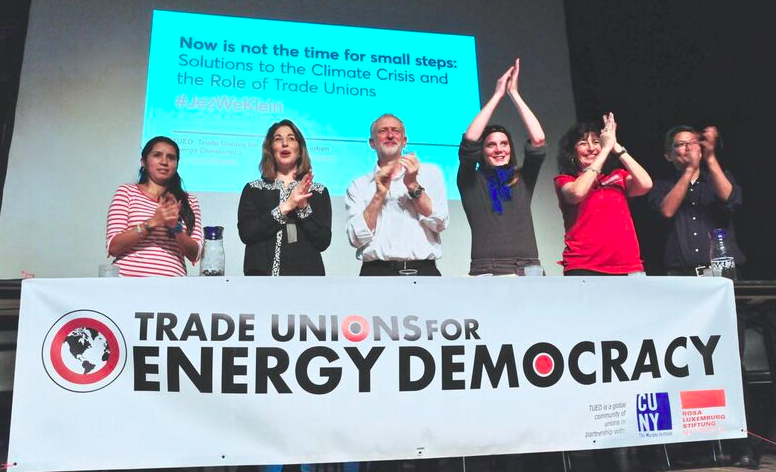 The final months of 2015 saw a large growth in support for TUED in the US and UK.

In the final months of 2015, seven unions representing approximately 4.6 million workers have joined Trade Unions for Energy Democracy. Five of the unions are from the US and two are from the UK.

In a letter dated October 1, 2015, the General Secretary of the UK union Transport Salaried Staffs’ Association, Manuel Cortes, informed TUED that the decision to participate in TUED had been made by the union’s Executive Committee. TSSA is a 22,000 member union representing drivers working for railway companies, shipping companies, bus companies, travel agencies, airlines, call centers, and IT companies in the UK and Ireland.

On October 7th, the policy committee of the UK’s second largest union, UNISON(1.3 million members) also agreed to participate in TUED. UNISON represents workers in a range of public services and hosted a TUED meeting in London on November 27 prior to COP 21 in Paris.  UNISON’s 2014 Warm Homes Into the Future report has drawn attention to the important role of energy conservation in the residential sector both for reducing energy use and for creating jobs. In a statement on the report, UNISON national officer Matt Lay said, “We need to lead the energy agenda and we are in a key position to achieve this.”

In the United States, the United Electrical Workers (UE) has also joined TUED, by way of a resolution passed at its 74th national convention in August 2015. The UE represents roughly 35,000 workers in companies like General Electric, and also newly-formed worker cooperatives, such as the Republic Windows and Doors in Chicago.

The resolution, “Protect our Planet for Future Generations”, endorsed TUED and other “worker-oriented efforts to address climate change.” The resolution called for “public ownership of the energy industry and for massive investments in renewable energy.”

Also in October, the US’ largest union, the National Education Association (2.9 million members) joined TUED. The union has been supporting teachers with lesson guides on climate change. Another education union, the Professional Staff Congress, which represents 25,000 faculty and research staff working for the City University of New York, joined TUED in November.

Education unions from Australia, Romania, the US and the UK are now part of TUED, as is their global union federation, Education International (EI.) At its quadrennial world congress in July 2015, resolutions were passed to make sustainable development and climate change one of EI’s priorities in the coming years.

Finally, in early December the 270,000 member union UNITE-HERE joined TUED.  The union represents workers in the US and Canada in the hotel, gaming, food service, manufacturing, textile, distribution, laundry, transportation, and airport industries. At the global level,UNITE-HERE has played a leading role in major campaigns around domestic workers and textile workers’ struggles in countries like Bangladesh. Ashwini Sukthankar,  Director of the Global Campaigns Department, will represent UNITE-HERE on TUED’s Global Advisory Group.