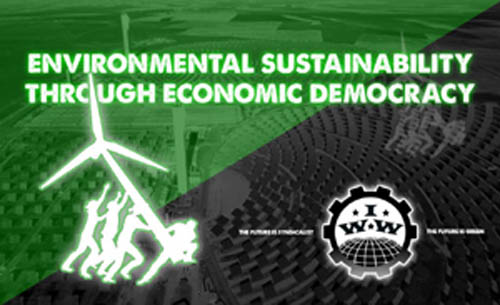 Unions and the climate justice movement

Where does the union movement stand on the issue of climate justice? The answer to that question is not entirely simple. First of all, it’s important to understand the differences between revolutionary unions (most of which are syndicalist—such as the CNT, FAI, SAC—or Marxist—such as NUMSA—in their orientation, or some hybrid inclusive of both and more—such as the IWW) and mainstream reformist unions, such as the AFL-CIO.  For most revolutionary unions, climate justice is an inherent part of the struggle to overthrow capitalism, abolish wage slavery, and create a new society within the shell of the old. For example, the IWW has organized an environmental unionism caucus that dedicates itself to climate justice and other ecological issues. The South African union, NUMSA, is a supporter of Trade Unions for Energy Democracy (TUED) and has issued a statement calling for the end to the “Mineral Industrial Complex” (even though they represent mine workers) in favor of renewable energy.[1]

Where the reformist unions (sometimes called “business unions” or “class collaborationist” unions by their detractors) stand varies widely, and to be accurate, some of these “reformist” unions have more (or less) “revolutionary” orientation within the spectrum of the mainstream labor movement. While many still believe that capitalism can be reformed, the evolving realities of capitalism—which is becoming extremely repressive as it imposes increasingly crushing austerity upon the working class—the ever heightening urgency of addressing capitalist induced global warming, and the increasingly impossible-to-ignore realities of police violence, movements like Black Lives Matter, and other social issues are driving many unions to question their adherence to it, beyond the mere rank and file militants within each of them.

One would expect the Building Trades and most heavy industry based unions in the United States, many of which are still largely dominated by white male workers, to be least supportive of climate justice (or even likely to swallow the rhetoric of climate denialism) and conversely expect the service unions, many of which are predominantly composed of women and People of Color to be most supportive of it, and in some cases that’s true, but not always! The actual “geography” of where unions stand on climate justice is actually quite complex, inconsistent, and in some instances contradictory.[2]  Sorting it out completely is well beyond the scope of this article, but it is illustrative to cover some general ground and cite a few interesting examples.

For example, National Nurses United, which includes the California Nurses Association, has taken a stand against the Keystone XL Pipeline (and NNU is a partner in Trade Unions for Energy Democracy), and has taken strong stances on climate justice in general. By contrast, the Laborers Union supports Keystone XL, opining:

The reasonable thing is to build the pipeline, create jobs here and reduce our dependence on oil from hostile regimes, instead of caving to fringe extremists and seeing that oil go to China.[3]

LIUNA is joined by most of the AFL-CIO Building Trades unions in supporting Keystone XL as well as many other similar projects, ostensibly because such projects would “create jobs” (claims that have proven to be false). In actual fact, Labor Network for Sustainability has shown that far more skilled, union jobs would be created by repairing existing pipeline infrastructure, but so far the Building Trades have not acknowledged this in any meaningful fashion.

Ironically, LIUNA was once an affiliate of the Blue-Green Alliance—a coalition of unions (including the United Steel Workers), politicians, and environmental NGOs (including the Sierra Club) that purportedly seeks to unite labor and environmental movements—but quit in 2009, because some of that alliances affiliates—notably the Sierra Club—oppose Keystone, although the Blue-Green Alliance itself has not taken an official position on the issue, and USW international president, Leo Gerard has declared he supports Keystone X-L, even though the USW opposes unrefined crude oil exports.[4]

One of the affiliate unions in the Blue Green Alliance, the International Brotherhood of Electrical Workers (IBEW), is described by Labor Network for Sustainability as being a big supporter of renewable energy, and for the most part that’s true and makes sense, because, in many cases, this means that IBEW members do the work. One of the methods by which communities deploy more renewable energy, particularly wind and solar generated electricity, is through Community Choice Aggregation (CCA).

However, in northern California, one of the biggest opponents to CCA is IBEW Local 1245. In fact, Local 1245 has tried to get resolutions passed against CCAs in virtually every Central Labor Council in the state, and supports a capitalist utility backed ballot initiative which would virtually outlaw CCAs. Local 1245 defends their position on the basis of “protecting union jobs”, but critics claim that the leadership of IBEW Local 1245, in particular Hunter Stern, is actually carrying the water for Pacific Gas & Electric (PG&E), with whom they have a contract.

Several other mainstream Bay Area unions, including (but not limited to) the California Nurses Association, ILWU Local 6, LIUNA Local 21, SEIU 1021, UNITE-HERE Local 2850, and USW Local 5 have expressed interest in supporting CCAs (as long as they’re staffed by union workers, a justified demand, and one suggested by TUED).

The IBEW isn’t monolithic in its opposition to CCA’s however, because San Diego based IBEW Local 569 supports a plan for CCA there, in spite of opposition from other IBEW locals, including those that represent workers at the San Diego Gas & Electric (and its parent company, Sempra Energy), the private utility whose profits would be threatened by its creation.