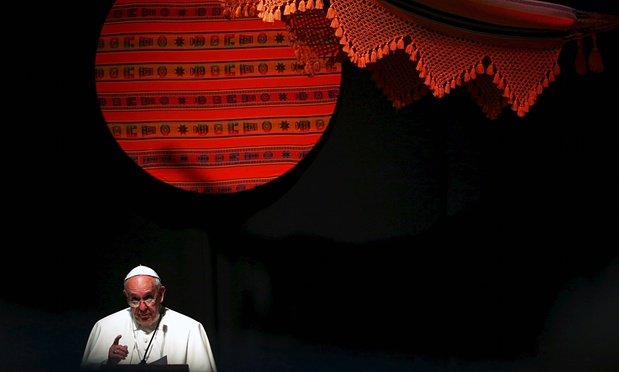 Unbridled capitalism is the ‘dung of the devil’, says Pope Francis

“Let us not be afraid to say it: we want change, real change, structural change,” the pope said, decrying a system that “has imposed the mentality of profit at any price, with no concern for social exclusion or the destruction of nature”.

Since his election in 2013, the first pope from Latin America has often spoken out in defence of the poor and against unbridled capitalism but the speech in Santa Cruz was the most comprehensive to date on the issues he has championed.

Francis’ previous attacks on capitalism have prompted stiff criticism from politicians and commentators in the United States, where he is due to visit in September.

The pontiff appeared to take a swipe at international monetary organisations such as the IMF and the development aid policies by some developed countries.

“No actual or established power has the right to deprive peoples of the full exercise of their sovereignty. Whenever they do so, we see the rise of new forms of colonialism which seriously prejudice the possibility of peace and justice,” he said.

“The new colonialism takes on different faces. At times it appears as the anonymous influence of mammon: corporations, loan agencies, certain ‘free trade’ treaties, and the imposition of measures of ‘austerity’ which always tighten the belt of workers and the poor,” he said.

Last week, Francis called on European authorities to keep human dignity at the centre of debate for a solution to the economic crisis in Greece.

He defended labor unions and praised poor people who had formed cooperatives to create jobs where previously “there were only crumbs of an idolatrous economy”.

In one of the sections on colonialism, he said: “I say this to you with regret: many grave sins were committed against the native peoples of America in the name of God.”