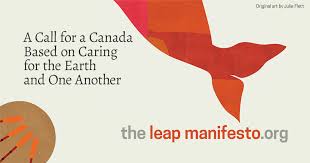 If you know me, you know I tend to be optimistic about climate justice (some would say I’m in fact a hopeless idealist, or an incurable romantic, or even an insane utopian dreamer). Notwithstanding this (or is it because it’s all true?) I wanted to begin the year on a hopeful note – thus I’m taking this leap into the chartable waters of 2017.

With this I invite you to read, meditate on, share and discuss one of these amazing stories every day for twelve days as 2017 opens up before us.  Together let’s start a new year of 365 days of building the more powerful climate justice movement we want!

This is actually about something whose origins lie more than a year ago, but that doesn’t mean its past its use-by date.

The Leap sprang from a group of radical Canadian intellectuals and activists who share a common analysis with that articulated by co-founder Naomi Klein’s 2014 instant classic This Changes Everything: Capitalism vs. the Climate. The only book I can think of on the climate justice movement that rivals it is journalist Wen Stephenson’s poignant cri de coeur What We Are Fighting For Now is Each Other: Dispatches from the Front Lines of Climate Justice.

The Leap is a manifesto that aspires to spark and inform a movement. I was one of hundreds who attended a meeting where it was presented to a global audience at COP 21 in Paris in December of 2015. There was real enthusiasm in a room of intergenerationals, much of it for a chance to hear Klein and her husband Avi Lewis, whose film based on the book, and is also titled This Changes Everything, had just been released.

Rajiv Sicora, who edits the blog, now named The Leap: System Change on a Deadline, invites your participation, describing the blog as a space to “highlight a diverse range of voices – campaigners and frontline activists, theoreticians, policy wonks – writing for atypical audiences. We hope to offer a powerful platform for everyone from veteran writers who have yet to delve into the climate debate, to up-and-coming journalists, to longtime activists who don’t normally have time to write at all” [full disclosure: I have been published on the blog].

Rajiv also explains the origin of the name:

It comes from the conclusion of This Changes Everything, entitled “The Leap Years: Just Enough Time for Impossible.” This is the kind of leap Naomi writes about:

“A great deal of the work of deep social change involves having debates during which new stories can be told to replace the ones that have failed us. Because if we are to have any hope of making the kind of civilizational leap required of this fateful decade, we will need to start believing, once again, that humanity is not hopelessly selfish and greedy – the image ceaselessly sold to us by everything from reality shows to neoclassical economics.”

See what you think, and then imagine what The Leap would look like from your vantage points – be they national, generational, gendered, “raced,” class-based, or otherwise. Even better, gather a few friends together and try this!

Below are some highlights to give you a sense of its flavor. You can read the whole manifesto here.

We start from the premise that Canada is facing the deepest crisis in recent memory.

We could live in a country powered entirely by renewable energy, woven together by accessible public transit, in which the jobs and opportunities of this transition are designed to systematically eliminate racial and gender inequality. Caring for one another and caring for the planet could be the economy’s fastest growing sectors. Many more people could have higher wage jobs with fewer work hours, leaving us ample time to enjoy our loved ones and flourish in our communities.

We know that the time for this great transition is short. Climate scientists have told us that this is the decade to take decisive action to prevent catastrophic global warming. That means small steps will no longer get us where we need to go….

Moved by the treaties that form the legal basis of this country and bind us to share the land “for as long as the sun shines, the grass grows and the rivers flow,” we want energy sources that will last for time immemorial and never run out or poison the land. Technological breakthroughs have brought this dream within reach. The latest research shows it is feasible for Canada to get 100% of its electricity from renewable resources within two decades; by 2050 we could have a 100% clean economy.

We demand that this shift begin now….

The money we need to pay for this great transformation is available – we just need the right policies to release it. Like an end to fossil fuel subsidies. Financial transaction taxes. Increased resource royalties. Higher income taxes on corporations and wealthy people. A progressive carbon tax. Cuts to military spending. All of these are based on a simple “polluter pays” principle and hold enormous promise.

One thing is clear: public scarcity in times of unprecedented private wealth is a manufactured crisis, designed to extinguish our dreams before they have a chance to be born.

Those dreams go well beyond this document. “We call on all those seeking political office to seize this opportunity and embrace the urgent need for transformation”. We call for town hall meetings across the country where residents can gather to democratically define what a genuine leap to the next economy means in their communities.

Inevitably, this bottom-up revival will lead to a renewal of democracy at every level of government, working swiftly towards a system in which every vote counts and corporate money is removed from political campaigns.

This is a great deal to take on all at once, but such are the times in which we live.

And so we call on all those seeking political office to seize this opportunity and embrace the urgent need for transformation. This is our sacred duty to those this country harmed in the past, to those suffering needlessly in the present, and to all who have a right to a bright and safe future….

Now is the time for boldness.

now is the time to leap.

You can get involved in the discussion here. Why not take the plunge, heart in hand, with your soul on your sleeve?