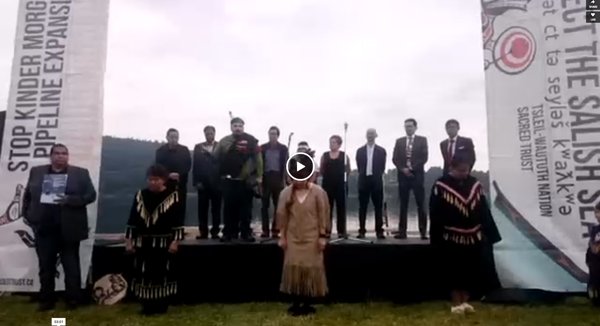 NORTH VANCOUVER, BC and COAST SALISH TERRITORY, May 26, 2015 – Today, the Tsleil-Waututh Nation the “People of the Inlet” released the outcomes of its independent assessment of the Kinder Morgan Trans Mountain pipeline and tanker project (TMEX), conducted as a matter of its own jurisdiction and law. On the basis of its assessment – which found that the TMEX proposal represents unacceptable risks and would violate Tsleil-Waututh law – Tsleil-Waututh announced that it has denied approval for the TMEX project to proceed in its territory.

The results of the independent Tsleil-Waututh assessment come in the face of mounting criticism and dissatisfaction with the National Energy Board’s (“NEB”) review of the TMEX project.

“The Tsleil-Waututh assessment, which relied on the knowledge of Tsleil-Waututh members as well as extensive expert reports, found that the potential effects and consequences of the Trans Mountain expansion proposal would be even worse than we thought,” said Chief Maureen Thomas. “As a matter of our ancestral laws and stewardship responsibilities, our nation had no choice but to reject the TMEX project.”

The Tsleil-Waututh assessment was conducted under its Stewardship Policy which is an expression of the nation’s inherent jurisdiction and law. It finds, among other things that:

“We’ve done what the NEB has struggled to do: a holistic and thorough review of the TMEX project,” said Rueben George of the Tsleil-Waututh Sacred Trust Initiative. “We have concluded that the project is inconsistent with our stewardship obligations, which include the responsibility to maintain and restore conditions in our territory to allow for the environmental, cultural, spiritual and economic foundation for our nation to thrive.”

The TMEX proposal would result in a seven-fold increase in oil tanker traffic from Westridge Marine terminal, located in the heart of Tsleil-Waututh’s traditional territory and visible from the community of Tsleil-Waututh. The Tsleil-Waututh assessment finds that a major oil spill at the terminal could affect every inch of Burrard Inlet.

“Today we are putting Kinder Morgan and the Canadian government on notice that we will use all lawful means to ensure that Tsleil-Waututh’s decision in relation to the TMEX proposal is recognized, respected and enforced,” said Chief Thomas.

The following may be downloaded from the Trans Mountain Assessment Report page: