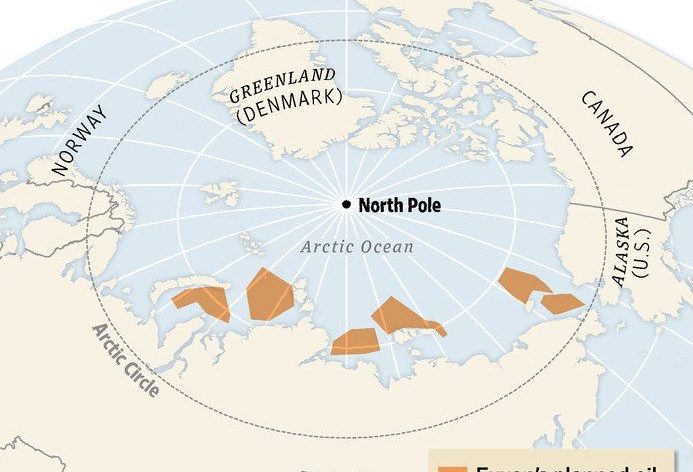 Trump, Putin, and ExxonMobil team up to destroy the planet

The aligning interests between Russian President Vladimir Putin, Russia’s choice for U.S. president (Donald Trump), and Big Oil represents the gravest threat to humanity (and democracy) since the rise of the Axis powers in the 1930s.

That’s because while Trump may not be able to destroy global climate action and the landmark 2105 Paris climate deal all by himself — as he pledged to do during the campaign — he probably could do that with help from Russia and the trillion-dollar oil industry.

So much is explained by Trump’s Secretary of State choice. Media reports now say it will be Rex Tillerson, CEO of oil giant ExxonMobil, which had made a $500 billion oil deal with Putin that got blocked by sanctions.

Stalling the biggest oil deal ever did not just “put Exxon at risk,” as the Wall Street Journal reported in 2014. MSNBC’s Rachel Maddow explained last week this deal was so big it was “expected to change the historical trajectory of Russia.”

This deal could explain why Putin appears to have interfered in U.S. elections in favor of a Trump victory. Recently, “the C.I.A. altered its formal assessment of Russia’s activities to conclude that the government of President Vladimir V. Putin was not just trying to undermine the election,” as the New York Times reported Saturday, “but had also acted to give one candidate an advantage.”

You can certainly make a plausible case, as many have, that Putin had enough motivation to interfere simply to undermine the legitimacy of U.S. elections.

On the other hand, it was always a little puzzling that Putin seemed to so admire a guy who had pledged to fully open the on-shore and off-shore spigots of U.S. domestic oil (and gas) drilling. After all, the end result of those policies would inevitably be a lower price for oil and gas, which compose the single biggest source of revenue for Russia. That’s why we saw headlines from January like, “Oil Price Collapse Pushing Russia’s Economy To The Edge” and from October like, “Why U.S. Oil Production Trumps Any Russian-OPEC Deal.”

But for Putin and the kleptocrats who benefit from his rule, little matters more than enriching coffers right now. It is no coincidence that just last week, Putin revealed Russia had sold a 19.5 percent stake in the Kremlin-controlled oil giant Rosnet for $11.3 billion to Qatar and others, “confounding expectations that the Kremlin’s standoff with the West would scare off major investors,” as Fortune reported in a must-read piece that connects major pieces of this puzzle.

“Just a few weeks ago, most industry watchers had written off the chances of a foreign investor being found for Rosneft,” Fortune reports. But this deal, the biggest oil deal of 2016, “pointed to a possible reassessment by foreign investors of the risks of dealing with Russia, at a time when the election of Donald Trump as U.S. president has heightened expectations of a thaw between Moscow and Washington.”