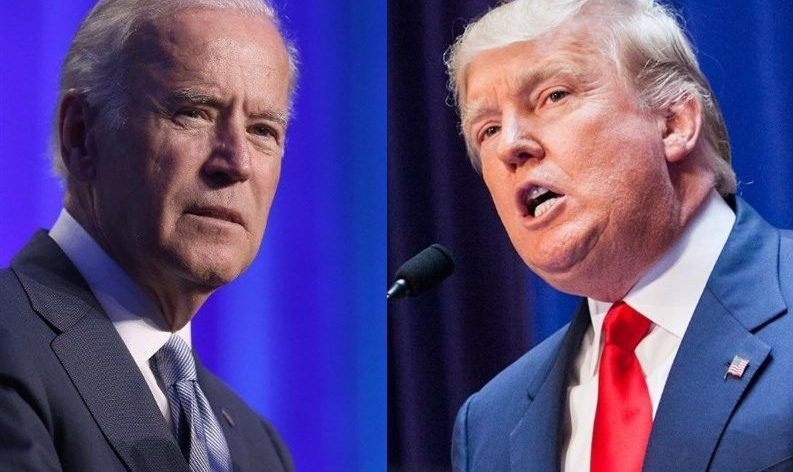 Trump or Biden? Duh! We’re picking our battleground, not our leader

Joe Biden’s political resume is a catalog of reasons we on the Left condemn the Democratic Party as one of the “two right wings” of the single party of capital. Yesterday’s Man is frack-happy, dances with billionaires, and wants to jail anarchists along with arsonists. Installing Biden in the White House and electing a Democratic majority to the Senate will not usher in a Green New Deal, Medicare for All, racial equality, or a major reduction in the military budget.

Should a Left that Biden wholeheartedly rejects lift a finger to get him elected?

Some argue that we should never support a Democrat. They justify this on grounds that we will never get to revolutionary change if we keep voting for the “lesser of two evils.” Voting third party or even staying home will challenge the farcical choice between tweedledum and tweedledee. So they say.

But this is not just another quadrennial opportunity to choose who will mislead us. “Another four years of Trump may literally lead us to the stage where the survival of organized human society is deeply imperiled,” warns Noam Chomsky. The choice is between a president who would like to crush the Left and one who hopes to coopt us.

The question for the Left is not whether Joe Biden is the “lesser of two evils” but whether a Biden or Trump administration will create better conditions for the Left to organize. Despite the mobilization of millions in Black Lives Matter demonstrations in recent months, the Left has no chance of making a revolution this year.

But the Right does! A neofascist bloc with expansive ambitions has captured one of the two major parties. This bloc aims to consolidate its grip on state power this fall, whether Trump wins or not. We underestimate Trump at our peril. At the end of August, FiveThirtyEight gave Trump a 31% chance of winning the election. Michael Moore, who correctly predicted Trump’s victory in 2016, has sounded the warning again. That’s without resorting to any post-election hijinx. If Trump loses the election with less than a crushing defeat, he can pursue “legal” pathways to remain in power.

And, for Trump, illegality presents no red line. Trump knows that a cold prison cell may await him in New York State if he fails to extend his stay in office or, alternatively, flee the country. If we still have a functioning bourgeois democracy in 2021, it will not be because Donald Trump has willingly left office, but because trumpism has failed to assemble a sufficiently powerful coalition of right-wing forces to pull off an authoritarian coup.

The consequences of Trump’s remaining in the White House will not favor the Left. We may find humor in Trump’s attempts to paint Joe Biden as a socialist, but Trump is dead serious about crushing the Left if he can make it to another term.

Democrats shook their heads when Trump boasted in his convention speech four years ago: “I alone can fix it.” Yet Trump has already done a prodigious amount of “fixing” on taxes, climate, judicial appointments. He has eviscerated regulatory agencies. Although his “cruelties, collusions, corruptions, and crimes” are legion, he has delivered for his most powerful backers. If Trump holds on to the White House, he’ll do more of the same, and worse, to ensure that no future administration will bring him and his cronies to justice.

Still, the point is not just the magnitude of Trump’s evil — that’s a one-dimensional political assessment. We are engaged in a multidimensional Gramscian war of position, building strategic alliances with working-class forces that can ultimately wield hegemonic political power.

Trump’s continuation in power would make Left progress impossible. Every movement for social justice — whether focused on climate, race, workers’ rights, Indigenous sovereignty, reproductive rights, policing, or international solidarity — would be attacked and pushed into a defensive posture if not silenced, jailed, and forced underground.

“Preservation and expansion of democratic space is crucial if the working class and all those damaged by capitalism are to have the most favorable conditions to organize for power,” writes radical strategist Max Elbaum. And says Angela Davis, this election “will be about choosing a candidate who can be most effectively pressured into allowing more space for the evolving anti-racist movement.”

As Elbaum urges, the Left has much to gain by aligning with the “labor, racial justice, climate justice, gender justice, immigrant rights, LGBTQ, tenant rights, public health and other organizations that will be going all-out to beat Trump.”

“The central polarization in the country today,” writes Elbaum, “is between a Trumpist bloc driving toward authoritarian rule vs. a majority opposition that, for all the vacillations and differences within it, is defending the democratic space that movements for justice, peace, and radical change require to advance.”

Mounting campaigns for third-party candidates with miniscule support will dangerously isolate us from essential allies. It certainly will not persuade them of our superior grasp of revolutionary strategy. Voters overwhelmingly think Biden v. Trump matters more than past presidential choices, and they’re right.

The question we need to ask is, “What would the battlefield look like under Trump, and what would it look like under Biden?” Unless we want to come off as dilettantes, we need to address the dangers of this moment and, as Norman Solomon puts it, “reject and elect Biden at the same time.”

Ted Franklin is a member of System Change Not Climate Change, a North American ecosocialist network, and a signer of the August 3, 2020 open letter to the Nation readership entitled “To Defeat Trump, Discredit His Movement, and Elect Progressives.”