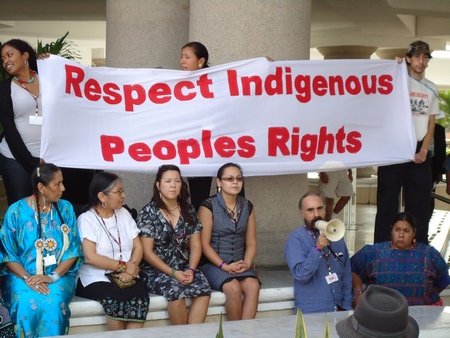 Dozens of social movement organizers recently gathered in Toronto at a meeting convened by the This Changes Everything team to envision a new economy centered on climate justice. With relentless extractions of labour and land harming all life on earth, cross-sectoral alliances are necessary.

But a number of predictable tensions bubbled up at the gathering, some related to land defence and workers’ rights. How do we shift from a petro-economy to prevent catastrophic climate change while safeguarding workers whose livelihoods depend on the resource economy? Over the past few decades a green economy, which would ensure jobs and equity within a low-carbon economy, has been posited as a solution.

Extending from this and in the context of reconciliation, I want to envision emancipatory possibilities of solidarity between workers’ movements for self-management and Indigenous struggles for self-determination.

Capitalism not only creates the conditions for the expropriation of labour, but also limits what can even be characterized as labour.

Our society primarily defines workers as those producing within the industrial, financial, service or technological economies. Labour outside of these economies is not only devalued, but also unrecognized as productive labour. This includes reproductive and affective labour, land stewardship, and care work. Single mothers, elders, peasants, women of colour, and Indigenous communities, all of whom are deliberately impoverished and stigmatized as “uncontributing,” overwhelmingly undertake this hard work that maintains life itself.

Blockades from Clayoquot to Caledonia have long been sites of conflict between workers in the resource sector and land defenders working to protect the land. Within the house of labour we can create a formidable precedent by respecting blockades as legitimate picket lines.

Furthermore, since land grabs are, to borrow from David Harvey, accumulation by dispossession, Indigenous land defence is an impediment to capital accumulation. Dene scholar Glen Coulthard notes that blockades “seek to negatively impact the economic infrastructure that is core to the colonial accumulation of capital in settler political economies like Canada’s.”

Indigenous land defenders rarely describe their efforts as work, but rather say they are protecting a way of a life under attack by development projects. As Lianna Spence from Lax Kw’alaams, who recently voted to reject Pacific NorthWest LNG’s project, states, “They’re offering us benefits if we vote Yes. But we already have a lot of benefits around us – we have coho, spring and sockeye salmon. We have halibut, crab and eulachon.”

We have normalized the idea of labour as a job that extracts time and energy from us for someone else’s profit. But If we understand “work” and “way of life” as synonymous — as generative rather than extractive processes — it becomes evident that Indigenous nations are working to protect laws and relations stemming from their land-based economies.

Such economies are not only local and sustainable, but also offer a profound challenge to the logics of commodification and isolation inherent to capitalist markets. Author Leanne Betasamosake Simpson articulates, “If I look at how my ancestors even 200 years ago, they didn’t spend a lot of time banking capital, they didn’t rely on material wealth for their well-being and economic stability. They put energy into meaningful and authentic relationships. So their food security and economic security was based on how good and how resilient their relationships were.”

With growing attacks against them since the 1980s, many North American unions retreated from anti-capitalist stances and took on more constrained slogans of “more jobs” or “fair working conditions.” Fighting for dignified conditions of work is most potent when done alongside a systemic challenge to capitalist and state relations that subjugate the social and class positioning of workers (particularly racialized non-citizen women increasingly stratified into precarious work).

The bold leadership of unions that revive principles of social unionism ensures that unions are not simply advocating mobility within capitalism and state structures, but are primary allies in the struggle against capitalism and imperialism.

As Herman Rosenfeld, a former GM worker, writes, “Job security is key, but what kind of jobs? Is the job security strategy one that works against the interests of the rest of the working-class and First Nations peoples, or in partnership with them? Moving away from the narrow focus on the short-term sectoral interests of a relatively small group of workers, whose jobs are currently defined by their employers, is a critical way of building unions as fighters for the class as a whole, and for a different, sustainable, and hopefully anti-capitalist future.”