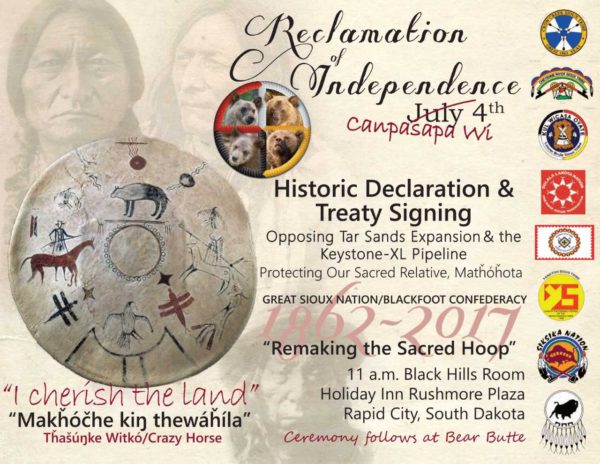 RAPID CITY, SOUTH DAKOTA – He began his presidency by signing executive memorandum to green-light the Keystone-XL Pipeline (K-XL) and Dakota Access Pipeline (DAPL), and last week President Trump continued what Chairman Brandon Sazue of the Crow Creek Sioux Tribe denounced as, “A sustained attack on sacred lands and tribal cultures” with the removal of Endangered Species Act (ESA) protections from the grizzly bear in Greater Yellowstone.

The event will include signings of the Grizzly: A Treaty of Cooperation, Cultural Revitalization and Restoration and the Treaty Alliance Against Tar Sands Expansion Treaty, the two most signed treaties in history.

Among the chiefs making the journey to stand in solidarity with leaders of the Great Sioux Nation and Ponca Tribes are Grand Chief Stewart Phillip, President of the Union of BC Indian Chiefs, Grand Chief Serge Simon, Mohawk Council of Kanesatake, Chief Kevin Hart, AFN Regional Chief for Manitoba, and Chief Stan Grier, Chief of the Piikani Nation of the Blackfoot Confederacy.

“Mni Wiconi, Water is Life, became a rallying crying for many of us who gathered to protect our treaty lands and lifeblood, the Missouri River, from DAPL. With protections now stripped from the sacred grizzly bear, the headwaters of the entire West are now threatened,” said Sazue.

“Three of the nation’s critical river systems, the Missouri, Columbia and Colorado originate in Greater Yellowstone, and sustain life to 55-million Americans downstream. The grizzly’s ESA status protected those rivers and those Americans of all ethnicities. With delisting, Trump is once again putting his fossil fuel backers over the health and well-being of the earth and all she sustains,” continued Chairman Sazue.

Principal FWS delisting agent, Matt Hogan, has refused to comment on alleged connections to Anadarko Petroleum and Gas, the largest landholder and leaseholder in Wyoming, where the fate of Yellowstone and the grizzly rests. Wyoming’s Governor Matt Mead, Senators John Barrasso and Mike Enzi, are beneficiaries of Anadarko campaign contributions. All three have championed grizzly delisting, and Barrasso has been a cable news staple promoting K-XL.

The Oglala Sioux Tribe has petitioned for a Congressional inquiry into the potential conflict of interests in the grizzly delisting process, a fact that even Republican Congressmen Tom Cole and Markwayne Mullin brought to Secretary of the Interior Ryan Zinke’s attention in a recent letter. So far ignored by the mainstream media, Zinke perjured himself before Congress the morning of the grizzly delisting announcement. “Will you commit to consult with affected tribes prior to any delisting announcement?” Congressman Wm. Lacy Clay pressed Zinke at the House Natural Resources Committee Oversight Hearing. “I will commit to that. I think it’s not only a right, it’s the law,” Zinke stated. Soon after concluding his testimony, Zinke announced the “Delisting of the Yellowstone grizzly bear.”

In its final grizzly delisting rule, FWS concedes, “It is true that development can occur in conjunction with oil and gas leases that pre-date the roadless rule,” and designates “permitted resource exploration or extraction sites such as oil and gas exploratory wells, production wells, plans of operation for mining activities, and work camps” as “Developed Sites” within the grizzly bear “Primary Conservation Area” to be administered by “the National Parks and National Forests.”

“Despite the posturing of the Trump administration’s paternalistic approach to Tribal Leaders, as was witnessed in the White House meeting June 28, we can clearly see his desire to open our lands for the benefit of his cronies in the gas, coal and oil business. Andrew Jackson did the same during his administration – taking our lands, culture, and lives while telling us that it was for our own good,” responded Councilwoman Casey Camp-Horinek of the Ponca Nation.

Trump fêted representatives from  two percent of tribes in the US at the White House to speak about “the rich, natural resources” on Indian lands, which the President categorized as “vast amounts of deposits of coal and other resources.” This “energy wealth” and “vast treasures” will now be “a lot easier” to access “under the Trump administration,” he promised.

“The danger is that President Trump may misconstrue the attendance of those few as Indian Country’s concurrence with his policies. Some of the same tribes sat at Trump’s ‘energy roundtable’ also oppose his administration’s delisting of the grizzly and assault on the newly designated Bears Ears National Monument. Trump used the bait and hook tactic to entice them, which will ultimately allow extractive industry to gain access to tribal energy reserves. Trump’s divide and conquer strategy is all too familiar,” cautioned Ben Nuvamsa, former chairman of the Hopi Tribe, and Hopi Bear Clan member.

“This July 4th, Indigenous Leaders will gather to sign a declaration of independence from fossil fuel conglomerates and harmful entities who assault out territories, now epitomized by the K-XL threat,” added Councilwoman Camp-Horinek.

Led by Chief Stan Grier, the Piikani Nation initiated the “grizzly treaty,” and in conjunction with Chairman Sazue, Grier rekindled the historic alliance between the Blackfoot Confederacy and Great Sioux Nation. In Calgary on May 17, the tribes signed a historic accord, opposing the construction of the K-XL Pipeline, which resulted in common cause with the Treaty Alliance.

“As the fights against the Dakota Access Pipeline and Keystone-XL rage on, the Treaty Alliance will be proud to stand side by side with our new Tribal allies in defense of their sovereign right to stop these dangerous projects,” said Grand Chief Serge Simon of the Mohawk Council of Kanesatake on behalf of the over 120 Indigenous Nations in the US and Canada that have already signed the Treaty Alliance Against Tar Sands Expansion. Grand Chief Simon described Keystone-XL and Enbridge’s Line 3 as posing “a real threat to a livable climate for us all.”