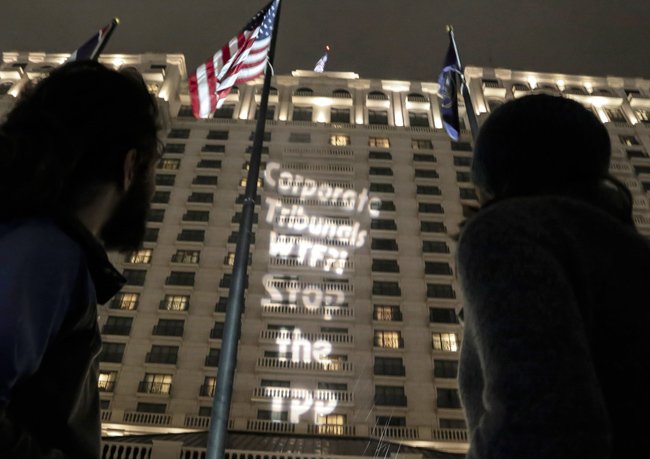 A trade rule that makes it illegal to favor local business? Newest leak shows TPP would do that and more

Secret negotiations on the Trans-Pacific Partnership (TPP), a trade and investment agreement involving 12 nations of the Pacific Rim, are coming to a close, and President Barack Obama will soon submit the final agreement to the U.S. Congress for approval.

Presumably, he will urge the deal’s passage with the same unsubstantiated and misleading claims his administration has offered all along: that the TPP will support Made-in-America exports, enforce fundamental labor rights, promote strong environmental protection, and help small business.

But a newly leaked document belies those claims. The Trans-Pacific Partnership’s text consists of a number of chapters, among the most important of which is the one on investments. On March 25, WikiLeaks released a confidential draft of that chapter dated January 20. The draft contains instructions indicating that it will be declassified only “Four years from entry into force … or, if no agreement enters into force, four years from the close of the negotiations.”

A quick reading of the leaked chapter makes it clear why TPP sponsors have gone to great lengths to keep their negotiations secret. The document substantiates claims by opponents that the TPP is a corporate-rights agreement designed to facilitate the export of U.S. jobs, allow corporations to sue governments for enacting labor and environmental protections, make it illegal for governments to favor local businesses, and advance the colonization of national economies by global corporations and financiers.

As problematic as this chapter is, we can be thankful that it is out in the open. Now the need is to understand what all the legalese means.

The leaked document includes many technical details decipherable only by trade lawyers. Here are the Cliffs Notes in simple English.

Let’s start with the Investment Chapter’s section on how the TPP’s member countries should treat foreign investors:

Each Party [country] shall accord to investors of another Party treatment no less favorable than that it accords, in like circumstances, to its own investors with respect to the establishment, acquisition, expansion, management, conduct, operation, and sale or other disposition of investments in its territory.

Put in plain English, the above paragraph means that signatory countries renounce their right to favor the domestic ownership and control of the lands, waters, and other productive assets and services essential to the lives and well-being of their people.

The 12 countries further renounce their right to favor locally owned businesses, corporations, cooperatives, or public enterprises devoted to serving their people with good local jobs, products, and services. They must instead give equal or better treatment to global corporations that come only to extract profits.

2. Corporations must be paid to stop polluting

Another provision limits what member countries can do in regard to corporate investments:

No Party may expropriate or nationalize a covered investment either directly or indirectly through measures equivalent to expropriation or nationalization (“expropriation”), except: (a) for a public purpose; (b) in a nondiscriminatory manner; (c) on payment of prompt, adequate, and effective compensation [emphasis added] … ; and (d) in accordance with due process of law.

This provision may sound reasonable, until you look at the chapter’s definition of “investment,” which includes “the expectation of gain or profit.” This odd definition means that a corporation can sue a signatory nation if the country deprives the corporation of expected profits by enacting laws that prohibit the company from selling harmful products, damaging the environment, or exploiting workers. Other language in the chapter makes it clear that this applies to actions at all levels of government.

In other words, a country in the TPP has every right to stop a foreign corporation from harming its people and the environment—but only if the country compensates the corporation for the expense of not harming them.

Similar provisions are already on the books in the North American Free Trade Agreement (NAFTA). According to Public Citizen’s Trade Watch,

Foreign firms have won more than $360 million in taxpayer dollars thus far in investor-state cases brought under NAFTA. Of the 11 claims currently pending under NAFTA, demanding a total of more than $12.4 billion, all relate to environmental, energy, land use, financial, public health and transportation policies—not traditional trade issues.

The leaked chapter also describes how disagreements will be settled:

The arbitrators are private lawyers who are not accountable to any electorate. They are empowered by the TPP to order unlimited public compensation to aggrieved investors. The proceedings and the identities of the tribunal members are secret, and the resulting decisions are not subject to review by any national judicial system.

According to The New York Times, NAFTA tribunals, on which the ones in the TPP are modeled, even have the power to overturn judgments of national courts—including the U.S. Supreme Court. John D. Echeverria, a law professor at Georgetown University, has called this method of dispute settlement “the biggest threat to United States judicial independence that no one has heard of and even fewer people understand.”