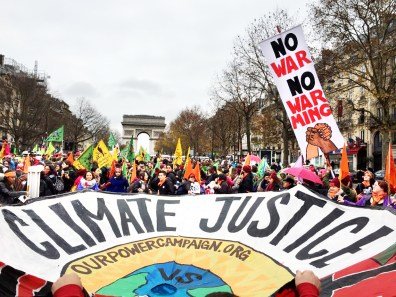 On track to what? Colonialism, climate change and COP23

The most prominent global conference on climate change – the UNFCCC 23rd Annual Conference of Parties meeting – recently closed with much fanfare, talk of success and ‘being on track’.  There was little to indicate that any significant headway had been made to curb the predicted catastrophic levels of global warming however. Hosted by the COP23 President and Prime Minister of Fiji, Frank Bainimarama, it was the first time a small island nation had held such a role, and it was hoped by some that this would see a prioritisation of climate-affected small island states. Given the five yearly review cycles of the Paris agreement, this year’s COP was ostensibly orientated towards shoring up transparency measures and expanding frameworks for countries to meet climate goals. The main goal was to translate the global agreement made at last year’s meeting in Paris into a meaningful set of rules – rules that reflected not only the agreement to try to limit future global warming to 2C, but also the more ambitious target of a future limit of 1.5C. For many scientists, 1.5C is the threshold beyond which many island nations such as Fiji come under severe threat of ecological catastrophe.

COP23 failed in many regards to cement the Paris agreement. It was a continuation of the previous year’s rhetorics of targets, mitigation and promises of finance. Alongside the launch of a very public ‘coal-phase out’ agreement (lacking any timeline or actual commitments), there was an absence of any commitments to action by countries in the global North to take action before 2020, lack of detail or agreement on climate finance, a continuation of the paucity of funding for adaptation and no agreement on how to compensate for the losses and damages caused by climate change. Given that the various agreements and pledges made thus far on climate change mean likely future climate change will be between 3-4C, an increase many scientists see as catastrophic, these failures are all the more significant.

The discourse of ‘being on track’ is informed by the protection of assets and infrastructures held in the Global North rather than the preemption of increasing climate events in the Global South. Ample scientific evidence has shown that unless fossil fuel production and consumption is imminently reduced to an extent far exceeding that discussed by world leaders, the possibility of staying below 2C, let alone 1.5C, is extinguished. To this extent, prevention has long been replaced with mitigation and adaptation, which would severely impact upon frontline communities in the Global South, especially those which are already seeing the decimation of land, crops and resources leading to current and future mass migration. For non-frontline Global Northern nations, higher GDPs and longer lead in times make climate proofing a more realistic prospect, and more focus is thus placed on insulating borders and protecting national economies.

The conflict around the terms of loss and damages is a key indication of this disjunction. Adaptation can only help so much, and for those nations already suffering the effects of superstorms, droughts, flooding, and ocean inundation, large scale adaptation may be too late. Compensation for loss and damages is necessary for planning relocation in places facing sea level rise such as Kiribati, or to support the switch to heat-tolerant crops such as from coffee to cacao in South America. The current narrow focus of loss and damages in technical reports means that the reality of climate caused loss and damage does not cohere with actual experience. Attempts by frontline nations to broaden this scope have been blocked by Global Northern countries through the COP itself. While some money has been pledged by G20 countries, this does not take into account that mere insurance will not cover everyone effected for all losses. What is also being seen are collaborations between developed nations with private insurance firms. This means that such firms are gearing up to directly profit off the evermore frequent disasters. For these reasons and more, there is a call by vulnerable countries to frame loss and damages as a political issue, not just a technical one. Doing this would perhaps involve acknowledgment of climate debts and reparations, and would place the issue permanently on the agenda, mainstreaming it into other processes such as capacity building, financing and technology transfers – a call that is unsurprisingly being objected to by leaders from the Global North.

Countries in the Global North are working through the COP to disavow their climate debts through reframing attention on insurance mechanisms and voluntary aids or opportunistic investment. These efforts are accompanied by broader moves to secure scarce resources, as exemplified by land grabs, the expansion of fracking and the development of new fossil fuel pipelines. The brief appearance at the COP of President Trump’s team was emblematic of this, with their focus being on the development of ‘clean’ coal and nuclear energy, and the absence of discussion of either reparations for climate debts, or serious plans to reduce emissions and abate warming. Somewhat disingenuously, the seriousness of the coming catastrophe is directly acknowledged by the countries of the North. It is in evidence in the exponential expansion of border regimes which are aimed at securitizing responses to climate-related migration, and indeed migration more generally. In this way, the adaptive response to climate change entails the architecture of repressive border regimes alongside the design of profitable disaster insurance mechanisms. All of which is done with the express focus on the needs or interests of Northern elites.

The ‘track’ which we are apparently on, then, is one geared towards trapping people in the South so as to both better insulate Northern elites from the costs of, and to even profit from, disasters. This year witnessed devastating weather events around the globe, including devastating flooding in Central Africa, deadly drought in parts of Bangladesh, India, and Pakistan, and unprecedented hurricanes in the Caribbean and across the Atlantic ocean. These are a likely sign of things to come as we hurtle ever-faster towards climate chaos. It is no coincidence that those who are most vulnerable to these events are those for whom existing COP processes seem to offer little promise. The COPs are structured so as to prioritise the longer term interests of the Global North at the direct expense of the immediate threats facing people in the Global South.

What we have seen from how COPs have increasingly functioned from the beginning is that it operates as a means of containing politics, of shifting political questions into technical ones, not of progressing them. In this regard, we are indeed ‘on track’. As movements and communities around the world recognise, any hope of achieving a just response to climate change needs to go outside or beyond the COP as a process. Doing this allows for scope to discuss the kinds of reparative measures that would support the essential adaptations, and the free movement, required to preserve life for those in the Global South.