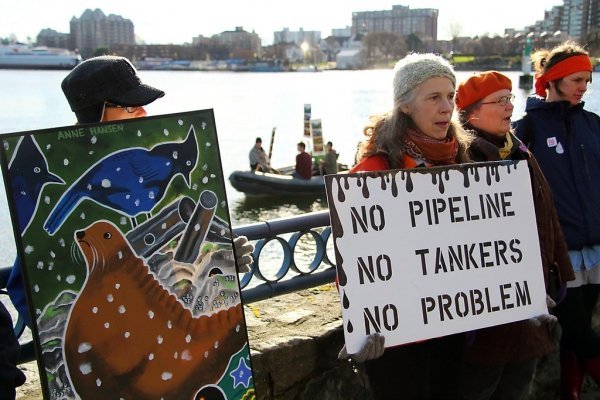 The failure of the Canadian government to take the worsening climate crisis seriously means that British Columbians have to look to their provincial government to stop new pipelines and oil tanker traffic. New satellite image analysis shows Greenland and Antarctica now losing a mind-boggling 500 cubic kilometres of ice annually, more than double the rate of five years ago, speeding up sea-level rise.

United Nations secretary-general Ban Ki-moon has asked world leaders to attend a special climate summit in New York this month to bring new initiatives in the fight against global warming and lay groundwork for agreement at the upcoming critical summit in Paris in 2015. In New York and elsewhere, activists are preparing for historic climate action rallies.

While 125 heads of state will attend the climate summit, the Canadian prime minister has decided against participating. No surprise for a government that has developed a track record of sabotaging climate negotiations, most prominently as the only country that exited the Kyoto protocol.

While the Canadian government fails to take climate change seriously and represent the interests of Canadians internationally, Canadian provinces must work as hard as possible to fill the void at national level. There is new hope with Ontario and Quebec pushing together for a national energy strategy with the goal to shift the focus to climate change and clean energy.

While British Columbia has taken a number of steps to reduce emissions, these efforts could become essentially neutralized if the proposed Enbridge and Kinder Morgan pipelines go ahead. Each of the projects would enable additional annual carbon dioxide emissions higher than today’s total emissions of our province.

One of the key reasons why the federal review process of these projects is deeply flawed is that in the eyes of the National Energy Board any concerns about this massive increase of greenhouse gas emissions is considered beyond the scope of the review and therefore irrelevant.

This is particularly nonsensical because other, supposedly positive ‘big picture’ impacts like promises of dubious jobs and growth benefits are being used by the proponents to trump concerns over regional environmental and economic devastation from new tars sands pipelines and tankers. They were also the main argument for the Joint Review Panel recommendation in support of the Enbridge Northern Gateway proposal as being in the national public interest (with the caveat of 209 conditions).

The outright rejection of any climate-related concerns over new tarsands pipeline and tanker proposals is extremely short-sighted in a number of ways. In addition to the main climate concern—increasing our greenhouse gas emissions even more instead of reducing them—there are also serious climate-related implications at the regional scale that must be considered to assess the risks of the proposed projects.

Overall there are three key reasons why climate change makes is impossible to justify new tar sands pipelines and tankers.

Annual global carbon dioxide emissions continue to increase. The carbon dioxide concentration in the atmosphere has reached close to 400 parts per million, a value not seen in at least 800,000 years, and the remaining carbon budget before entering run-away climate change territory is shrinking faster than the sea ice in the Arctic. Even the conservative and growth oriented organizations like the International Energy Agency have warned that we must not allow new investment in new dirty fossil fuel infrastructure because it will lock the world into catastrophic global warming.

Our planet is already hard hit by serious climate change impacts. From more severe floods, landslides, sudden temperature changes and wildfires that can damage pipelines, to stronger storms that can sink tankers, global warming is tipping the balance to even higher risks of massive pollution due to accidents. A pipeline or tanker oil spill is not a question of if, but when. Climate impacts already underway mean that these accidents will happen sooner than later. Global warming and its impacts will only get worse in coming years and make the proposed projects even more irresponsible.

3. Climate change is ramping up the urgency to safeguard our life support systems from dirty energy pollution

The brutal list of climate impacts already undermining our environment and economy is growing by the day. California is running out of water, historic forest fires are causing severe air pollution and extreme weather events are disrupting food production across many parts of North America and elsewhere. But current assessments of the risks of industrial infrastructure is still based on the assumption that, if we get hit by an accident, there will always be a Plan B (or a Place B) we can turn to in case of clean water, clean air or food production being affected by an environmental disaster. Climate change, however, means that we will have increasingly fewer intact places we can turn to if this happens, which means that we have to ask ourselves how many of these remaining precious areas we are willing to sacrifice for fossil fuel developments.

The lavish tar sands promises of industry and government are as bad as the deal offered by the Brothers Grimm’s Rumpelstiltskin, offering the secret of how to spin gold from straw in return for delivery of the firstborn. Are we really going to allow new tarsands pipeline and tankers to go ahead for the price of leaving an uninhabitable world for our children?

There is another way. Massive progress in renewable energy production, energy efficiency, transit and viable alternatives to fossil fuels has made it possible to speed up the transition to a low-carbon economy. But it is critically important that we act fast before climate change causes more harm and put the brakes on fossil fuels today.

The single most important thing our provincial government can undertake right now to inspire hope and global action on climate is to stop the proposed Enbridge and Kinder Morgan tar sands pipelines and a huge increase in tanker traffic through our province. The time is now.