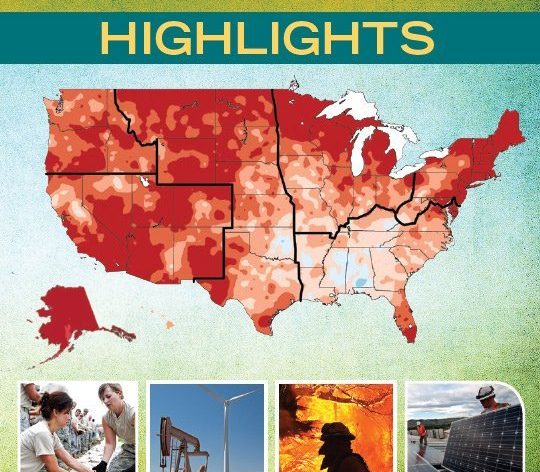 Yesterday, the Office of the President of the United States announced  an information campaign that will be ongoing to inform the U.S. public of the consequences of changing climate patterns and conditions in the U.S. The announcement coincided with the release of the Third National Climate Assessment of scientists in the U.S. You can read an announcement of all this here). The climate report and the White House announcement has major consequences for the political discussion of climate change and fossil fuels, including prospects for the Alberta tar sands and for LNG/fracking in North America. This fact sheet summarizes what climate change will mean for regions and major sectors of the U.S. economy.

The National Climate Assessment summarizes the impacts of climate change on the United States, now and in the future. A team of more than 300 experts guided by a 60-member Federal Advisory Committee produced the report, which was extensively reviewed by the public and experts, including federal agencies and a panel of the National Academy of Sciences. http://nca2014.globalchange.gov/

‘Screwed?’ US Climate Report Says Era of ‘Normal’ Over, CounterCurrents

Landmark report warns time is running out to save U.S. from climate catastrophe, Joe Romm

If You Think Climate Change Is Only A Distant Threat, Then You Need To See These Charts, Business Insider