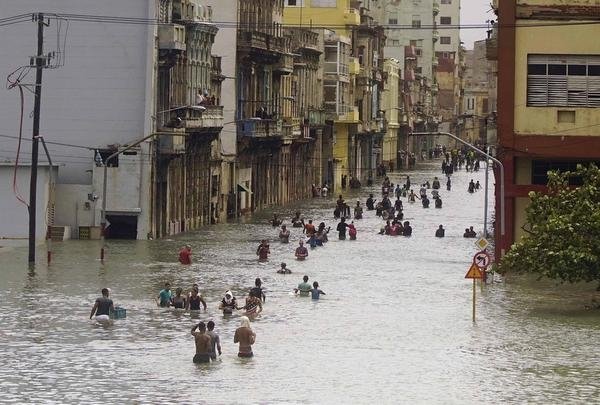 A tale of two islands

One island, a poor socialist state with infrastructure in grave need of modernisation, has slowly emerged out of the chaos caused by a hurricane’s wrath, while the other, a territory of the richest country in the world, cannot see the light at the end of the tunnel.

HURRICANES DEVELOP IN THE ATLANTIC Ocean and move across the cold water towards the warmer sea of the Caribbean. All that energy journeys, picking up steam, driving forward with immense force. This September, hurricanes Harvey, Irma, Jose, Katia and Maria thrust themselves into the Caribbean and devastated many of its islands as well as the coastline of the United States and Central America. One meteorologist, Phil Klotzbach of Colorado State University, suggested that this September was the most deadly hurricane month since 1893.

Changes in the world’s climate, scientists suggest, have made these Atlantic cyclones much more powerful than before. Warming waters increases the ability of the storms to draw in water vapour and to engorge themselves with more energy. These devastatingly formidable storms then drag the rising waters to produce dangerous storm surges that beat against coastlines and produce large-scale flooding.

Hurricane Irma, which arrived in the Caribbean Sea in early September, destroyed many of the small islands such as Anguilla, Antigua, Barbuda and St. Martin. Prime Minister Gaston Browne of Antigua and Barbuda said that Barbuda, which housed short of 2,000 people, had become “barely habitable”. The government called for an evacuation of the island, which now has a population of zero. It has been abandoned. This country in the Lesser Antilles or the Leeward Islands faces the brunt of hurricanes since it is in the mouth of the Caribbean. Daniel Gibbs of the government of St. Martin, a French territory also in the Lesser Antilles, said that 95 per cent of the island had been destroyed. “It is an enormous catastrophe,” said Gibbs, who represents the island in the French parliament.

Irma, a Category 5 hurricane—the strongest possible—struck Cuba with immense force in early September. The storm came fast and hard. The devastation was severe. In the small town of Moscu in the municipality of Esmeralda (Camaguey province), only 10 of its 289 houses remained standing. The Cuban journalist Yaditza del Sol Gonzalez reported for Granma that near Jiguey beach “the sea took it all”. The storm surge overcame the Malecon sea wall in Havana, sending water into its streets with ferocity. Havana, with its old buildings, suffered from flooding and power cuts. Ten people died, the majority of them in Havana. Cuba’s President Raul Castro took to the airwaves, calling for unity of the nation and for reconstruction of the island. “This is not the time to mourn,” Castro said, “but to build what the winds of Irma attempted to destroy.”

By all indications, the death toll in Cuba was remarkably low as was the devastation to the island’s infrastructure. Certainly, homes in the old part of Havana are brittle and parts of the infrastructure are in severe need of modernisation. But the island’s preparation for the hurricane and the general community spirit that prevails there saved it from total devastation. Tens of thousands of people had been evacuated from Havana in anticipation of the storm, and over a million people from across the island went into shelters. One such shelter was at the Karl Marx Vocational Pre-University in Matanzas, where volunteers gathered food, water and medical supplies for the evacuees.

The country’s pharmaceutical industry halted production of medicines a week before the storm in order to build up the stock of hydration salts, which were then distributed across the island. Electricity and gas supplies were cut before the storm came to the island, and measures were taken to protect the lines and transformers from the impact of the winds and the flooding. The government made sure to dispatch flour to state bakeries, which worked overtime to produce stocks of bread for the aftermath of the storm. Agricultural workers from Santiago de Cuba harvested their crops before they ripened in the field and distributed the produce.

Meanwhile, brigades and defence councils began to conduct search-and-rescue operations across the areas most affected by the hurricane. “The most important task is, and will be, the preservation of life,” said Dr Jose Luis Aparicio Suarez, a coordinator of one of the medical brigades. “The recovery will come later, gradually. Health and life are the absolute priorities.”

But rebuilding was not left to later. Radio Cadena Agramonte in Camaguey reported during the storm that electric workers had begun to restore power in the area. Within weeks, such workers restored the electric grid, which is not anyway in the best shape. The electric providers reported that the storm destroyed two high-tension pylons, downed 3,616 poles and 2,176 kilometres of power lines, and damaged 1,379 transformers and several substations. Today, almost the entire island has electrical power.