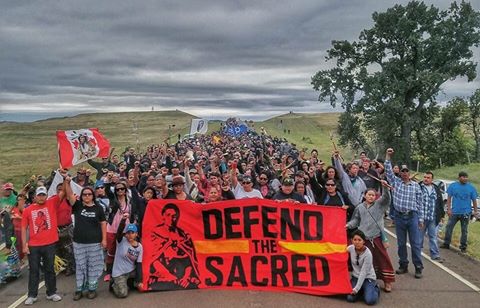 The defense of water knows no borders, according to the Mayan Ancestral Authorities, the communal authorities and elders of Mayan towns across Guatemala. This reality has led the Mayan leaders to work in solidarity with the Lakota Sioux as they challenge the construction of the Dakota Access pipeline.

The conflict in North Dakota between the Lakota Sioux and the company over the construction of the 3.6 billion dollar Dakota Access pipeline began in April 2016. The Sioux communities began their protest following the failure of the company to consult the tribe over the use of their tribal lands — despite multiple requests by tribal leaders — and a demand that the company preform an honest environmental impact report for the project.

On February 23, the National Guard and police raided the Oceti Sakowin camp, evicting the protesters. But despite the eviction, the example of Standing Rock continues to mobilize Indigenous activists across the world in defense of water. Thousands of supporters had traveled to the encampment to support the Sioux and their defense of water.

“When everybody showed up, including the clergymen of the world, I stood up on the bridge and I felt the meshing of all the religions, all the spirits, all the creators of all nations, and all the colors meshed as one people,” Eddie P. Blackcloud Sr., a Sioux leader who was among the first to stand against the pipeline at Standing Rock, told Truthout. “This is more than just about Standing Rock; this is about the world.”

The international support for the resistance will only strengthen as the United States Army has given the project the green light, despite the company’s failure to consult the Indigenous populations impacted by the project’s development.

Standing Rock and the struggle against Dakota Access pipeline have become the international example and rallying point for the defense of Indigenous territory. This resistance has brought Indigenous leaders together in solidarity from across the globe.

“Every community must arrive at its own means of struggle,” Ana Lainez, an Ixil Maya spiritual guide and member of the Ixil Maya Ancestral Authorities told Truthout. “It is time for them to organize and move forward in the struggle.”

“We went primarily to stand in solidarity with the Sioux communities in resistance to the construction of the pipeline,” Diego Cotiy of the Council of Indigenous Authorities of Maya, Xinca and Garifuna, told Truthout. “As members of the Ancestral Authorities of the Maya, Xinca and Garifuna, we are working to strengthen the movements and resistance against transnational companies that are violating the collective rights of our peoples, as well as violating our rights to land without any collective authorization to do so.”

The leaders arrived to share experiences and have an interchange between the elders, which also included the sharing of different ceremonial performances and practices.

“When we arrived, a member of the tribe stood up and offered to sing for us in his language,” Lainez told Truthout. “We felt incredibly welcomed.”

The Maya of Guatemala have a long history of struggle, which they shared with their brethren at Standing Rock. Since the end of Guatemala’s 36-year-long internal armed conflict in 1996, the Maya communities of the highlands have resisted the increased threat of the dispossession of Indigenous communal lands by transnational capital for the expansion of mining interests, the generation of hydro energy, and the expansion of export agriculture.

“We told them that they are united in the struggle, and that they are not the first or the last to be attacked,” Lainez explained to Truthout. “They are defending the river. It is [a] point of unification of many Indigenous peoples in the United States, and the world, because the water is calling us.”

“Without water, even the rich leaders of the United States cannot survive,” Cotiy told Truthout. “We must respect water, and where it comes from. It is a spring of life. Water is the blood of our mother earth.”

Others who have traveled to Standing Rock could feel this connection as well. Pamela Bond, the Fish and Wildlife coordinator for the Snohomish tribe, was present the nights of the visit by the Maya Ancestral Authorities of Guatemala, and pointed to the way in which the visitors brought the force of their own struggle to the NoDAPL camps.

“They all brought their songs and their prayers. It is like waiting for someone to come home, and to say, ‘we support you,'” Bond explained to Truthout.  “There are no English words [that] can describe the feeling of your spirit, and the knowledge that people are uniting for a cause, for our first mother.”

“We shared our testimonies of resistance,” Cotiy told Truthout. “We explained that we are in the same struggle, and that we have to become brothers in this movement…. The Indigenous peoples of the world feel the pain that the Sioux are experiencing in Standing Rock.”

Thousands of communities are entrenched in struggles to defend the remaining Indigenous territories across the hemisphere and the world. These struggles challenge transnational mining companies, energy generation projects, corporate monoculture, or the destruction of forests. Communities are mobilized by a concern for the impact of these development projects on their water and land.

“It is the same imperialism that [the Sioux] are experiencing in their territory,” Lainez told Truthout. “It isn’t important to the companies that there are Indigenous there; they are only looking out for their own economic interest. It is important [for the Indigenous communities] to go out and protest and denounce the violation of their rights.”

The Maya people have a long history of resistance to the colonization of their territories. As a result, during the country’s 36-year-long internal armed conflict, the Guatemalan military considered the country’s Maya populations to be part of the insurgency, which they used to justify the genocide against the Maya in the 1980s.

Indigenous Maya communities have further organized in the two decades since the end of the internal armed conflict to challenge the expansion of megaprojects within their territory, and to protect their water. In April 2016 thousands marched 263 miles to demand that the Guatemalan government respect the right of the communities to water access.

These struggles come at great costs to activists, who regularly face campaigns of disinformation, criminalization and even assassination. This danger is highlighted in a recent report by Amnesty International, which states that Guatemala and Honduras are two of the most dangerous places for environmental activists.

Members of the other nations too see that these struggles are interconnected.

“It is everywhere; it is interconnected throughout the entire world,” Pamela Bond told Truthout. “These transnationals are everywhere doing this type of disaster on our environment.”

The construction of the DAPL and the Keystone Pipeline have become central parts of the energy policy of the Trump administration. Meanwhile, parallel threats are playing out in Guatemala, where US policy has threatened Indigenous lands with the expansion of hydro and geothermal energy generation projects. Since the end of the internal armed conflict, the Guatemalan government has greatly expanded the construction of hydroelectric projects. The expansion of energy generation is a key part of the current Alliance for Prosperity.

In fact, as the encampment at Standing Rock faces new threats and violence with the new Trump administration, the Guatemalan government has continued to criminalize the leaders of the movements in defense of territory and water.

During their visit, the Mayan elders sought to share their experiences of long-term resistance with the Sioux, offering an example for what sustained organizing against the pipeline could look like.

“One man does not have the power over the energy of the ancestors, or the creator/former,” Cotiy told Truthout. “If I could give an example from Guatemala, Partido Patriota entered [in 2012] with a president that was a former military general and murder[er]. He deployed the military to the east and western parts of Guatemala. But we as members of the Council of Ancestral Authorities resisted and broke the States of Sieges that he declared.”

Cotiy connected this resistance to the current moment in the US, in which the Indigenous movement is facing a uniquely repressive federal government. This violence was embodied in the February 23 eviction.

“We had to declare as the Guatemalan people, the unconstitutionality of the actions of Otto Pérez Molina and his Partido Patriota,” Cotiy adds. “The same is now occurring in the United States, as there is a lot of resistance to the politics of Mr. Trump.”

Copyright, Truthout. May not be reprinted without permission.