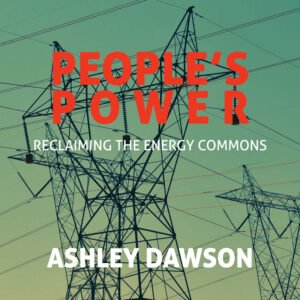 A Review of Ashley Dawson, People’s Power: Reclaiming the Energy Commons (OR Books, 2020)

I don’t mind admitting, when my wife and I purchased a solar array two years ago, I basked a bit in my climate virtue. True enough, the tax incentives were a factor. And the idea of being self-sufficient through some looming, dystopian collapse was vaguely reassuring. But I must also admit I had not considered the resources and energy, the extraction and exploitation, that made my shiny, virtuous “clean energy” possible.

To his great credit, Ashley Dawson does not avoid these very real dilemmas in his new book People’s Power: Reclaiming the Energy Commons published by OR Books. In this easily accessible, passionately argued intervention, Dawson gives the reader both a valuable primer on contemporary struggles for energy justice and an entry into the theoretical debates whose outcome will inform and guide movement strategy going forward. It won’t come as any surprise to those readers that just as the science tells us we need “urgent and unprecedented change”, John Kerry, the anodyne embodiment of moderation, has been appointed Joe Biden’s “climate czar”. This terminal stage of capitalism is one of profound disconnect and dissonance. Any such progress, therefore, will require fighting over fiercely contested terrain. This “war of position” (and perhaps “maneuver”) is demarcated by the dual meanings of power found in the book’s title: both the control of energy and control over the State at its various levels.

We have all heard the tedious argument that scary language will only cause people to withdraw. Again, to his credit, Dawson does not mince words in describing the converging crises the planet faces. If your house is on fire, you want to make that clear to the 911 dispatcher. And if humanity wishes to, as the author describes it, “avert hurtling to fiery apocalypse”, changing lightbulbs, or installing solar panels, are necessary but not even close to sufficient responses. Ask the survivors of recent Australian, Californian or Colorado fires if “apocalypse” sounds too polemical. Were John Kerry to speak of “planetary ecocide” or “global economic collapse”, I for one would be inspired and strangely relieved. But then, as I suggested, we live in strange times.

As an activist hoping to initiate a municipalization campaign in my own community, I found the book’s historical account of energy production in the U.S., from Gifford Pinchot’s “Giant Power” to our current Rural Electrification Association, of great value. Ashley urges us “to remember examples like the rural electric co-ops of the 1930’s, which offer an example of precisely the combination of a deepening of representative democracy combined with new organs of popular self-management.” Here in Montana both the monopoly utilities and their partisan regulators, the so-called Public Service Commission, are addicted to fossil fuel and the big dams which have decimated runs of anadromous fish. Could “the prospect of de-centralized, democratically controlled renewable energy generation” inspire and mobilize our rural citizenry? Could such representation be just and equitable? And could energy once again be thought of as a public good rather than a commodity?

This brings us to the crux of Dawson’s thesis and the vexed question of the State. How to negotiate this “necessary but impossible” relationship has bedeviled the Left throughout history and today’s “Green Reds” are no exception. Here the author provides examples of how popular struggles have moved, in the words of energy democracy activist and scholar James Angel, “in- against and beyond” the state. Dawson uses the thought of Nicos Poulantzas to interrogate the dilemma facing those who wish to de-commodify energy via “the long march through the institutions” of the capitalist state, including the courts. As Dawson puts it, “the battle for the Solar Commons…must be won by establishing new models of collective governance and the legal structures to legitimate these models.” To this end, People’s Power again provides a sampling of contemporary struggles, perhaps the most relevant being the “energiewende” movement in Germany, with a particular focus on Berlin. Having lived for an extended time in Germany, I know comparisons between what can be accomplished there and, for example, here in Montana, are strained. Each fight requires a unique mapping of social relations and sites of power. But I will welcome any and all inspiration in these bleak times.

At the end of the day, our local fight to take down the private, for-profit utility and gain control of our grid and our energy future is a fight over legitimacy. Both the capitalist state and market forces require, if not our consent, at least our acquiescence. The bourgeois, farcical game show known as “democratic governance” thrives on our participation. To be clear; this is not, as the popular chant would have it, what democracy looks like. This what profound alienation and estrangement look like. And the ecocidal, neoliberal hellscape euphemistically called “free enterprise”, dependent as it is on colonial dispossession and savage exploitation, requires ideological cover as well. Each is legitimized through ballots and flags, statues and paid holidays. In the specific case of fossil capital (the finance and investment which drives most of the earth’s production), recuperation comes in the form of a “political unconscious”, manifested as solar-powered sweat shops and an accelerated, luxury techno-optimism. In stark contrast, those fighting for an ecosocialist vision, who see (and feel) the emergency facing not just humans, but all the voiceless species, must ask people to relinquish; not just a “carbon culture”, but a beautiful dream, a fantasy of endless GDP growth fueled by the miraculous “power density” of fossil fuels. A fantasy which made a very few insanely rich and powerful and many, many others destitute or dead.

Despite the popular desire for a “return to normal”, this is actually the last thing the biosphere needs in this moment. Both Covid and global heating demonstrate the death-drive inherent to capital, which values accumulation and profit over life itself. As the author states: “If we wish to transform the material infrastructure of fossil capitalism, we must also interrogate and even upend the structures of feeling they have helped produce.” This is an epic, historical task. It’s possible that the combination of Greta Thunberg’s piercing stare and a global pandemic have indeed upended, as Dawson describes them, “expectations of unbridled freedom…space-annihilating patterns of mobility, and spiraling consumption”. It’s a big ask, but certainly reclaiming the energy commons would be a huge leap in the right direction. Ashley Dawson’s book does a great job mapping the coordinates so we stay on track.

Dave Jones is an activist and writer living in western Montana. A retired fishing guide, he is a member of System Change Not Climate Change.