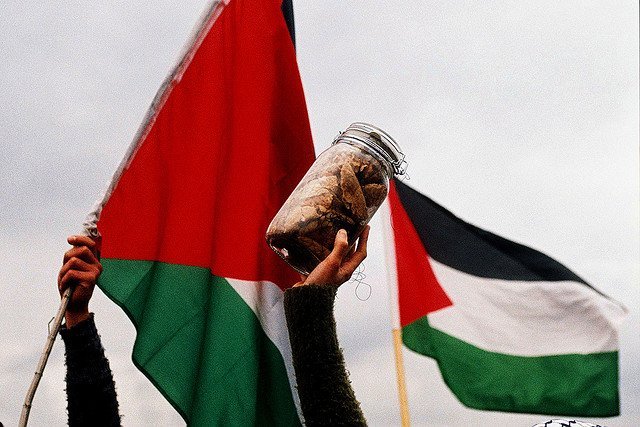 A statement of solidarity with Palestine

Rising Tide North America is part of the global movement against climate chaos and for social and environmental justice. We believe climate change can only be addressed by exposing the intersections between the oppressions of humans and the earth. No effort to create a livable future will succeed without the empowerment of marginalized communities and the dismantling of the systems of oppression that keep us divided.

As such, we condemn the Israeli military’s attacks on the Palestinian people in Gaza and the occupation of the West Bank. We reject any attempt to isolate the attacks on the Palestinian people and the occupation of the West Bank and Gaza from the intersectional global fight for climate justice. As the broad-based climate movement prepares to march in New York City, we call upon other groups and organizations committed to fighting the climate crisis to condemn publicly the Israeli military’s assault on Palestine.

In New York City, we will march with communities and groups who are working daily for community resilience against climate events like Superstorm Sandy and for food and environmental justice. We believe that from Palestine to New York City and beyond, our struggles for climate and social justice are all related.

In the movement for environmental and climate justice, we stand with those around the globe fighting war and occupation. Rising Tide North America is committed to opposing land grabs and resource exploitation by industries and state-sanctioned institutions. One of those institutions has been, and continues to be, imperial militaries which destroy communities, the environment, and the climate.

Militaries exploit land and natural resources to fuel their violent control and power over others. The unfettered burning of fossil fuels by militaries to wage war and violence on communities is exacerbating climate change and the impacts of droughts, extreme weather events, flooding, and sea level rise. This will lead to an increase in forced displacement and the number of climate refugees hoping to seek access to food, water, and homes elsewhere.

We recognize and reject that the United States financially and materially supports the Israeli military and countless other land grabs. As North American-based activists fighting against climate change, it is necessary to connect the colonization, capitalism and imperialism of our state and others with our daily work. The Israeli military’s actions actively support the corporations whose profits depend on the control and exploitation of land. As many regions of the world have so called ‘valuable’ natural resources, including the occupied Palestinian territories, we extend our solidarity with all who are impacted by resource extraction processes, and encroachments on their sovereignty and self-determination.