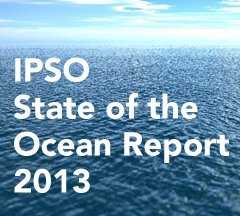 The state of the ocean 2013: perils, prognoses and proposals: executive summary

International Program on the State of the Ocean |  IPSO  | December 31, 2013
Share
FacebookTwitterEmail

London – October 3rd 2013: An international panel of marine scientists is demanding urgent remedies to halt ocean degradation based on findings that the rate, speed and impacts of change in the global ocean are greater, faster and more imminent than previously thought. Results from the latest International Programme on the State of the Ocean (IPSO)/IUCN review of science on anthropogenic stressors on the ocean go beyond the conclusion reached last week by the UN climate change panel the IPCC that the ocean is absorbing much of the warming and unprecedented levels of carbon dioxide and warn that the cumulative impact of this with other ocean stressors is far graver than previous estimates.