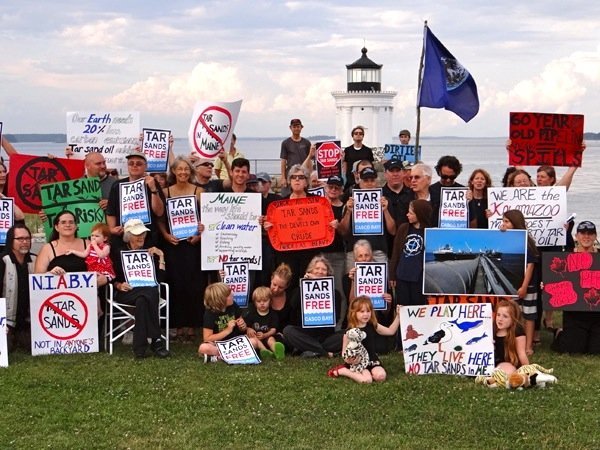 The National Wildlife Federation filed a lawsuit this week charging the U.S. State Department is refusing to disclose public information about a pipeline company’s possible plans to transport dangerous tar sands oil from Montreal to the coast of Maine.

The lawsuit takes aim at the oil industry’s repeated claims that there is no plan to transport the dirty oil through New England, despite numerous indications that such a plan indeed exists.

A 70-year-old, 236-mile pipeline, owned by Portland Pipeline Corporation (which is majority owned by Exxon-Mobile), currently transports crude oil from freighters in the city of South Portland, Maine to Montreal.

Yet, environmental and community organizations say there are strong signs that PPL and parent company Montreal Pipe Line Company is planning to reverse the flow of the pipeline in order to transport tar sands oil from Canada to South Portland where it would then be distributed to international markets via oil tankers and an upgraded terminal.

NWF is accusing the State Department of refusing to respond satisfactorily to a Freedom of Information Act request (pdf) filed over two years ago for public documents about such plans.

In a statement announcing the lawsuit, the NWF charges that the State Department has neglected to hand over a “key 2008 document from Exxon-owned Portland Pipe Line Corporation’s attorney detailing a previous plan to reverse the pipeline for tar sands use”—information the environmental group says provides critical information about the company’s future intentions to move tar sands.

“The public has gotten very little information about what the true the intentions are,” said Miles Grant, senior communications manager for NWF, in an interview with Common Dreams. “This should be public record.”

According to NWF, more than 40 towns in Northern New England have passed resolutions against moving tar sands through the region. In South Portland, a local effort to pass a zoning ordinance to block a future tar sands terminal was narrowly defeated last year after the oil industry poured hundreds of thousands of dollars into a campaign to squash the measure. South Portland organizers have vowed to continue the fight to keep tar sands out of their city.

While PPL claims it has no current plan to reverse the pipeline, critics charge that their refusal to share information about their plan casts doubt on this claim.

“Information is power, and that is why they are trying to hide their plans,” Robert Sellin, from the group Protect South Portland, told Common Dreams.