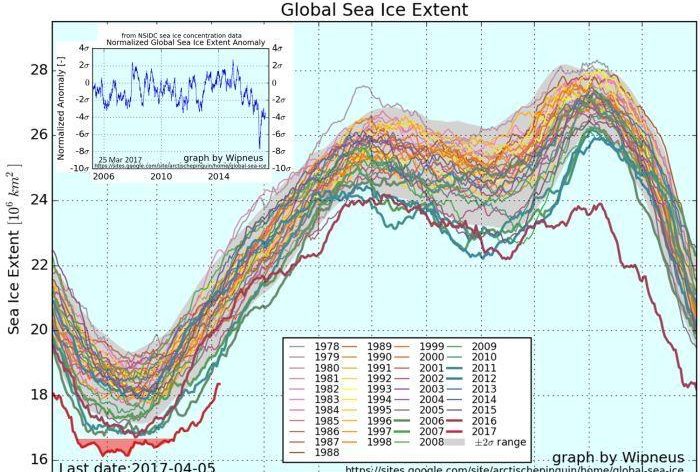 Is this the start of runaway global warming?

(An excellent, authoritative summary of much recent science discussions on Arctic changes and implications. Geoengineering (in a widel definition) offered, not as a technical solution, but as a last hope….it’s a perspective!)

This essay presents some observations on how the Earth’s climate has changed during the era of satellite observations beginning in 1979 when it became possible to see the planet as a whole world has changed through that time. The observations of how our planet has changed are real. What they are telling us about our future is open for interpretation. The majority of climate scientists think they paint a picture of a rapidly warming (at least in any geological or ecological sense) world, where the rate of warming over the last few years has been accelerating.

Our world’s climate is a chaotic and highly complex system. As such it is impossible to make exact predictions how climate will change over the next few years or decades. However, we can consider how climate may continue to change in terms of risk. This is discussed in the concluding Section 7. How should we react to the observed global warming? The observations show a growing risk to human society from runaway global warming, and they beg explanation. Arguably climate variation in the Arctic Region, and especially the area of the Arctic Ocean drives global climates through its effects on the location and behavior of the Northern Hemisphere’s jet streams (see A Rough Guide to the Jet Stream: what it is, how it works and how it is responding to enhanced Arctic warming) and ocean currents extending through the Atlantic Ocean from the Arctic to Antarctic and from there into the Pacific. For an explanation of how this can be see Wikipedia’s Thermohaline Circulation and Shutdown of Thermohaline Circulation, and also Section 5.3, below. It is also the case that the Arctic as a whole appears to be warming at something like twice the rate of the rest of the planet.

This essay focuses on observations of what appears to be the start of runaway warming in the Arctic that may have profound effects on global climates over the next few years; and a plausible cause – the warming driven release of methane gas from permafrost forming a strong greenhouse cap over the Arctic Ocean. Evidence shows that over the last few years winter cooling over the Arctic Ocean has been significantly retarded when the sun is below the horizon for months at a time when heat absorbed over summers with 24 hour daylight should be radiating away to outer space. However, during the late autumn and winter over the last two to three years, monthly average temperatures over large areas of the Arctic Ocean have been as much as 20​+ °C!! hotter than the 1989-2000 baseline averages for the same months.

The observations summarized here are based on computerized analyses of many millions of data points collected per day covering the entirety of the satellite era, beginning in 1979. To encapsulate summaries with the minimum of text and numeric data, I have used a number of animated maps where primary data is encoded in color. Changes in this data over time intervals ranging from days to months and years are shown as a stack of gif images forming short movies.

To me, in addition to a continuing rise in arctic temperatures, the most conspicuous indication that we may have passed a tipping point where arctic warming is increasing at an ever faster rate as shown by the graph below. This depicts changes in the areas (extents) covered by sea ice on the whole planet. Over the last 6 months on each day of the year the area of the globe covered by sea ice has been by far the lowest it has ever been in the satellite era for those days of the year and from 7 January until around 9-10 March – a period of two whole months – there has been less sea ice on the planet since the previous record low recorded in mid February 2016. Such a major deviation from “normal” indicates there are currently some serious climate changes taking place in the world.