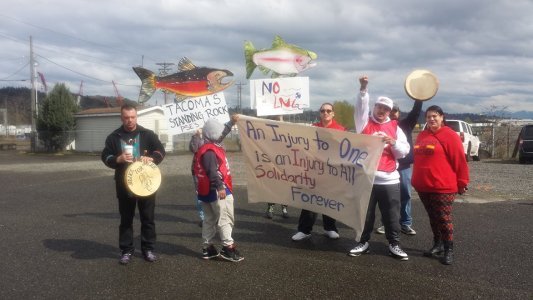 Members of the Puyallup, Standing Rock and Palouse Tribes and others protest plans for a Liquid Natural Gas (LNG) storage facility in Tacoma.
The unions need to act on this old slogan, “an injury to one is an injury to all” in real life, not just in words.

Tacoma has been one of the main dumping grounds for polluting industry in western Washington. We are home to nine EPA Superfund clean up sites.

This week we gathered on the Tacoma tide flats outside outside the site where Puget Sound Energy (PSE) is preparing to build the nations largest fracked gas storage plant (Liquid Natural Gas or LNG). There were members of the Puyallup Tribe, Standing Rock Tribe, the Palouse Tribe and their non-native allies from local political and environmental groups. We were about 50 people coming and going. The protest was hosted by Tacoma Direct Action and sponsored by Redline Tacoma, Save Tacoma Water and Green Party Tahoma. This was the first local protest actually at the site.

Takes More Than Prayer
James Rideout, member of the Puyallup Tribe and geoduck diver started the protest with a prayer and a song, with help from Jesse Nightwalker a member of the Palouse Tribe. James asked how far we were willing to go to fight this project, reminding us that it was going to take more than prayer, reminding us about what happened in Standing Rock.

ILWU
We stood on the four corners at the intersection located between the LNG site and Totem Ocean Trailer Express (TOTE). TOTE is supposedly one of the primary customers of the LNG. We handed out flyers to Longshore workers (ILWU 23) as they drove through the gate at TOTE and also to other port workers as they drove by. Some of the cars drove past without stopping, but many of them took our flyers. Most of them were not even aware of the project. They weren’t aware that their union leadership supports the project. The decision to support LNG was voted on at a general membership meeting without effort to truly inform the members on the issue. The union has been helping with the million dollar greenwashing campaign for PSE.

Interestingly, ILWU 23 sent a delegation with supplies and money to Standing Rock showing solidarity with the Water Protectors against the oil and gas industry there. Can the dockworkers be convinced to stand in solidarity with the Puyallup Tribe right here at home? Or will they instead support the the oil and gas industry? In my opinion, it would be helpful if Puyallup Tribe members ask their Tribal Council to set up a meeting with ILWU 23 and have a conversation about this. As union members, as the working class, our natural allies are fellow exploited/oppressed/discriminated people, like Native Americans, not Puget Sound Energy!

Gone but not forgotten.
Protesters of the LNG plant also remembered Jackie Salyers, murdered by the Tacoma police.

Puyallup Salmon Restoration Project
The project would be located feet away from a Puyallup Tribe salmon restoration project on the Hylebos Waterway. The Puyallup Tribe was the first organization to begin fighting the project which would be right outside the border of their reservation and right next to their waterway. Their objections to the project include concerns about the toxic waste being disturbed by the auger piles and other construction activities on the site. The ground at the site is polluted with very toxic chemicals from the previous tenant. The Puyallup Tribe has appealed the permits for the project. Unfortunately the work appears to be proceeding. There are auger piles being drilled into the contaminated ground as we speak, preparing the site for the Tacoma Dome sized storage tank.

Capitalist Crisis and Police Murders of Native Americans
The crisis of capitalism has recently lead to more interaction between the Puyallup Tribe and non-native activists in Pierce County. I think, that for good reason there is some mistrust from Native Americans about the intentions of non-native activists. But recent terrible occurrences have broken down some barriers. In 2016, Tacoma police officers murdered Puyallup Tribe member Jackie Salyers. In 2015, Lakewood Police murdered Suquamish Tribe member Danielle Covarrubias. Public outrage over these brutal murders and anger about our elected officials courting dangerous fossil fuel projects has lead non-native and native folks to see our struggles as intertwined. Puyallup Tribe leaders promoted the heck out of the LNG protest on fb. Puyallup Tribe and other tribe members live streamed on facebook, telling their family members, “Come down here. This is our fight. We need people down here.” Jackie Salyers family members were down on the tideflats chanting “No LNG in the 253!”

Big Business Politicians
Over the last year we have told City Council, The Port of Tacoma, The Utilities and Transportation Board (the UTC), The Pierce County Health Department and our State Legislators No LNG Plant in our port. They have ignored us. Two Tacoma Democratic city council members (Ryan Mello and Victoria Woodards) wrote letters in support of the project in 2014. One former Tacoma city council member (Jake Fey) who is now in the state legislature helped create a special tax break to encourage PSE to build the project. The UTC allowed PSE to set up a corporate structure that allows them to make us rate payers pay for the construction of the plant.

Solidarity Needed
Will dockworkers stand in solidarity with union members in Colorado (where PSE gets their gas) who are fighting to prevent their water and soil from being poisoned by fracking?

This week we had our first demonstration at the site. Stay tuned for more.

(Sarah Morken is an occupational therapist, a union member and a socialist in Tacoma WA. Among other issues, she was one of the leading forces in the 15 Now campaign in that city, was active in the protests against the police murder of Jackie Salyer and is active in the campaign against the NLG facility. She also represents a socialist voice in the Green Party.)