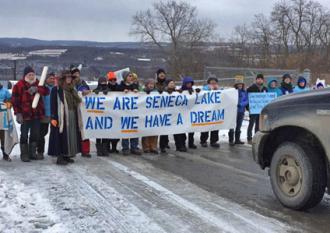 Standing up to an environmental menace

CAMPAIGNERS OPPOSING gas storage in the Finger Lakes region of New York welcomed the decision of local courts to dismiss all charges against the hundreds who have been arrested for protesting against a proposed gas storage facility in this area better known for tourism and wineries.

“We are Seneca Lake” mobilized a campaign of disobedience in October when the Federal Energy Regulatory Commission gave the go-ahead for the Texas firm, Crestwood, to expand gas storage facilities in underground salt caverns on the shore of Seneca Lake. Protesters argued that the project would be a disaster for residents of the area and for the numerous wineries and other jobs and businesses there.

While protesters endured the very bitter winter, the local police and the courts served the company well, arresting over 200 and seeking maximum fines and jail sentences for trespassing violations. Ten people were sent to jail for a violation trespass–something equivalent to a parking violation. Forty others were facing jail before the court agreement was reached.

Police did not differentiate among the protesters–arresting teenagers as well as 90 year olds. One man was handcuffed to his belt so that he could use his cane while being led away by the police.

As one protester explained, “I am extremely proud to be part of a community that is willing to be arrested in such numbers to prevent Crestwood’s plan to industrialize our region and threaten our lake.”

When leading environmental campaigner Sandra Steingrabber was first arrested, she said, “We hope that by showing the depth of our resistance, we can shine a spotlight on this menace in our community. This is just the first step in an enduring campaign.”

The organizers of the protest received support from the local community and from around the state. Groups of teachers, nurses, winery workers and owners, moms, dads and other groups organized days of protest at the site. They were successful at totally blockading the site on many occasions.

Defense attorney Sujata Gibson said, “This is a big moment in history to have this many cases dismissed in the interests of justice. It affirms the importance of this cause and the ethical motivations of the protesters.”