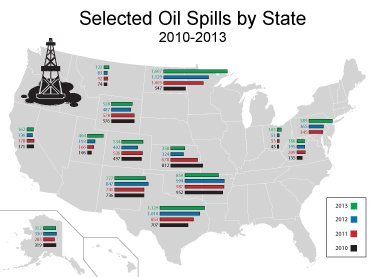 Mike Soraghan |  EnergyWire  | May 12, 2014
Share
FacebookTwitterEmail
The number of spills reported at oil and gas production sites shot up nearly 18 percent last year, even as the rate of drilling activity leveled off. There were at least 7,662 spills, blowouts, leaks and other mishaps in 2013 in 15 top states for onshore oil and gas activity, according to an EnergyWire analysis of state records. That’s up from 6,546 in the states where comparisons could be made (EnergyWire, July 8, 2013). That adds up to more than 20 spills a day.