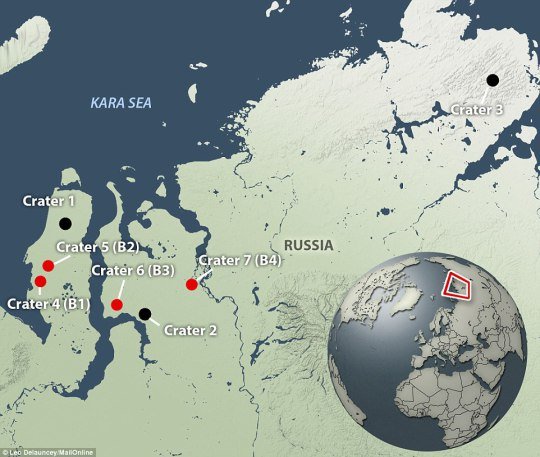 The ground smoked for hours. Then, with a great flash and an enormous boom, the land exploded. When the smoke cleared, all that was left was a great, black hole. Ejected earth lay scattered around it — sheer sides plunging into the permafrost like some gigantic, gaping gun barrel.

This was the scene last summer in Yamal, Siberia — a region of extreme northern Russia.

Speculation about the cause of this mysterious hole became rampant. It looked like a sink hole, except for the ejected material surrounding it. Some said it was a pingo. But pingos weren’t known to form due to explosions.

Teams of scientists rapidly descended upon the hole. And there they found high readings of methane at the hole’s base — in the range of 10% concentration, which is a very explosive level for the gas. At the base of the hole they also found evidence of hydrate. A form of frozen water-methane that is quite unstable unless kept under high pressure and low temperature.

The initial conclusion of the Russian scientists was that relic hydrate sealed beneath the previously flooded Siberian permafrost had been destabilized. Eventually reaching an explosive concentration, it then erupted from the ground.

Discovery of this methane crater spurred a sweep of the area. Almost immediately, two other craters with similar features were discovered. And throughout fall and winter, both ground searches and satellite reconnaissance identified still more.

(Newly discovered methane blow-hole found by satellite observation. In the top frame we see tundra absent the newly formed hole. In the bottom frame, we find the hole forming a lake [B2] surrounded by 20 or more ‘baby craters.’ Image source: The Siberian Times.)

Now, according to recent reports in the Siberian Times, a total of seven craters with features similar to the Yamal eruption have been pinpointed by observers. Just one of these craters (shown above) hosted about 20 smaller ‘baby craters’ surrounding it. In this instance, a large methane store below the permafrost is thought to have explosively displaced a shot-gun pattern of frozen soil sections before filling with water.

Most of the craters, like the one above, were observed to rapidly fill with water even as they continued to emit methane. In many instances, the methane emission was visible as bubbles on the newly formed lake surface.

Additional reports from reindeer herders have led these same scientists to believe that in the range of 20-30 of these methane eruption holes are likely to exist in this region of Northwestern Siberia.

The fact that reindeer herders keep discovering new holes and that the first Yamal craters discovered earlier this year were recent events have led local scientists to believe that the eruptions are a new phenomena for Siberia. There, temperatures have warmed by a stunning 2 degrees Celsius within the mere span of 14 years. A very rapid rate of warming that is putting severe stress on the geophysical stability of this Arctic region.

Last night, as polar amplification again ramped up, we saw an example of this very rapid warming with locations in Yamal, Russia experiencing -3.1 C temperatures as of 1 AM Eastern Standard Time. A very warm measure for this region during winter time — representing an anomaly at least 20 degrees Celsius above average. For reference, North Texas, an area far south of the Arctic Circle, experienced similar readings (-3.4 C) at the same time:

In other words, it was colder in North Texas last night than it was in Yamal, Siberia near the 70 degree North Latitude line beside the Arctic Ocean.

This extremely rapid warming is thought by Russian scientists to have destabilized zones of relic hydrate trapped beneath the permafrost. There, the methane gas bonded with water to form a kind of methane ice.

Sandwiched beneath frozen permafrost, the hydrate remains stable so long as temperatures and pressures are relatively constant. Any increase in warmth — either through geological processes working below the hydrate, or from changes at the surface causing permafrost to melt and warmer, liquid water to contact the hydrate — would result in increased hydrate instability.

(The Yamal Crater as seen by Russian Scientists who investigated the scene last summer. The crater’s structure and surrounding ejecta was indicative of an explosive outburst. Image source: The Siberian Times.)

In some cases, the gas would very rapidly liberate from its frozen traps forming increasingly high pressure pockets beneath the permafrost. If these pockets reach 10 percent methane concentration, they become very explosive and can be ignited when in contact with a catalyst or ignition source. The result, either due to very high pressure or ignition, is plugs of permafrost exploding from the ground as the gas erupts to the surface.

It is important to note that the amount of methane liberated by these initial eruption events is likely rather small — when considered on the global scale. However, what we see in Siberia now may be part of a growing and ominous trend.

First, we do not know the size of the potential methane store that could be liberated in such an explosive fashion. And the question must be asked — if we are looking at such rapid warming of methane hydrates in shallow sea and former shallow sea regions, what scale eruptions could we potentially experience in the future? Could very large sections of hydrate go critical? Areas possibly covering hundreds or thousands of square meters or more?

The Russian scientists seem very concerned. And, ironically, it is for the future safety of their oil and gas infrastructure, which sits atop what is potentially a rapidly destabilizing zone. A zone that could see explosive eruptions of the ground beneath pipes, equipment and extraction fields. (One would think that the Russians would also begin questioning the continued exploration and production of oil and gas considering its contribution to the dangers they are now identifying. But that level of wisdom appears absent in the recent assessments.)

Second, it appears that these methane eruptions provide pathways for ongoing release. Not all of the gas in the relic hydrate is initially liberated. And the structures that remain apparently release methane gas for some time — as is evidenced by continued high methane concentrations found at crater sites and by observed emissions from crater lake surfaces.

In essence, if this is a growing trend, then it is a rather unsettling one. Especially when one considers that it is just a single instance of many possible amplifying carbon feedbacks set off by a very rapid human warming. Particularly, the explosive land and ocean floor-altering nature of this specific carbon feedback makes it especially troubling. For it encompasses the very nature of a catastrophic upheaval.

In the end, the question must be asked — is Siberia sitting atop a methane volcano that is being prodded to rapid wakening by high-velocity human warming?