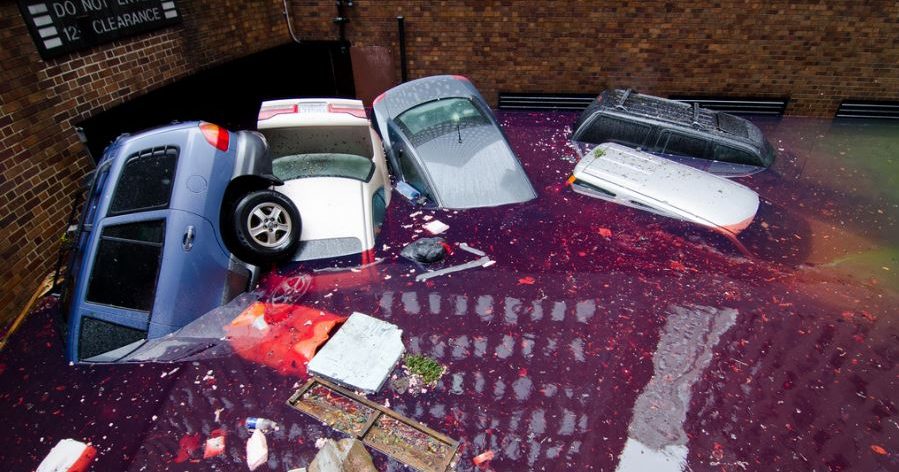 Shooting Bullets at a Hurricane

For all the jokes from predictable corners about the Florida-man proposal to shoot down Hurricane Irma, the prize for most futile climate-change-deterrence strategy belongs to far more culpable parties. As we approach Hurricane Sandy’s five year anniversary, New York politicians deserve serious consideration for the title. Accordingly, the organizers of the October 28 #Sandy5 March over the Brooklyn Bridge are rightly targeting more than just Republicans who deny climate science, but also the self-appointed leaders of “the resistance” we find in the Democratic Party. Climate justice activists across the country would do well to follow suit because shamelessly insincere climate politics will be a mainstay of establishment Democratic politics for decades to come.

Consider New York City mayor Bill de Blasio. The day after Trump’s June 1 announcement that the United States would withdraw from the Paris Agreement, de Blasio declared the city’s intention to unilaterally uphold the treaty’s terms, accepting on behalf of our city the mantle of “American climate leadership” abandoned by Trump. But a close look reveals a city bureaucracy more adept at churning out private-sector climate consultants than administering an energy transition on par with Churchill’s conversion of the British Navy from coal to oil. Shortly after de Blasio’s counter-announcement, the New York Times itemized the exodus of ranking staffers, analysts, and program directors from an Office of Sustainability better at shoring up its officials’ resumes than the city’s coastline.

On the one hand, there is the immediate problem of being understaffed as the administration scrambles to deliver its plan for reducing the city’s greenhouse gas emissions 80 percent by 2050 (80×50, as they say). That plan is due at the end of this month. But the bigger issue with the revolving door at such agencies is the practical lack of faith demonstrated by precisely those experts who best understand the political constraints on implementing meaningful sustainability. There is something at least nominally accountable about civil service compared to academic pursuits or a career in consulting. Go figure that when the chance presents itself to slip the leash of such accountability, the “experts” do just that. And this in trendy new disciplines such as sustainability and resiliency defined by their commitments.

Even if the mayor was sustainably staffed, is 80×50 ambitious enough to actually avoid passing the critical 1.5℃ global temperature change threshold identified by the Paris Agreement? Not according to the UN’s Environment Program, which estimates that even if 80×50 is met, global temperatures will increase by upwards of 3℃, well within the range to trigger the type of cascading climate change that scientists have been warning us about. In truth, the ambition and vision required to meet the sustainability and resiliency goals New York needs would entail antagonizing financial, energy, and developer interests all too cozy with the mayor’s administration. Every step de Blasio takes — like his decision to divest from coal but not oil and gas — reflects calculated centrism, certainly not bold leadership. On such issues, the mayor learned well from his old boss.

But when it comes to cynical half-measures to save the planet, the mayor’s rival upstate may take the prize. Whereas de Blasio saw a modest opportunity to score some political points after Trump’s withdrawal from Paris, Governor Andrew Cuomo’s adoption of the fraudulent 80×50 framework did direct damage by eroding more far-reaching legislation on offer. The Climate and Community Protection Act (CCPA) is among the nation’s most thorough legislative attempts to phase out fossil fuels — 50 percent by 2030 and 100 percent by 2050 — and it does so with deliberate attention to low-income New Yorkers and communities of color known to bear a disproportionate burden of the impacts of climate change.

The same week in June that California Democrats sabotaged a bill for single-payer health care sponsored by their colleagues, New York Democrats would not be outdone. To many environmentalists’ surprise, the Independent Democratic Conference (the IDC, a cynical political formation if ever there was one) had sponsored the CCPA, bringing it to the brink of success only to be stalled by two of the IDC’s own. Or as In These Times’ Kate Aronoff put it, “extracting the good PR of having symbolically backed progressive legislation while doing relatively little to get it passed into law.” That Cuomo was simultaneously pushing for a states-led initiative to implement the toothless and insufficient terms of the Paris Agreement without weighing in to push the CCPA across the finish line constitutes unforgivable opportunism.

On occasion, that same quality can land Cuomo on the side of progress: In 2014 Cuomo appeared to have gone above and beyond by banning fracking throughout the state. But Cuomo’s opposition to fracking was a victory driven not by the governor’s own conscience but by a statewide environmental movement to protect New York’s water resources and halt carbon extraction. Further, the heightened fuel prices that animated the fracking boom were a thing of the past by the time the governor settled on a full ban. Had it been a question of personal conscience, one might expect consistent behavior with respect to subsequent efforts to develop fossil-fuel infrastructure. And yet today under Cuomo’s supervision, the review process moves forward to allow the crudest of fracked oil to flow along the proposed Hudson Valley route of the Pilgrim Pipelines.

The oil intended for the southbound Pilgrim Pipeline is the same crude from North Dakota’s Bakken Shale responsible for the exploding trains in Lac-Mégantic, Quebec and Pickens County, Alabama, both in 2013. A Wall Street Journal study found the fuel to contain “several times the combustible gases as oil from elsewhere.” Now known to be the most volatile fuel on the American market, there’s little wonder that every town traversed by the proposed route have come out against its construction. Many of those towns have considerable wealth and many of the same players that forced the state to ban fracking back in 2014 are lined up against the Pilgrim Pipelines. But the decisive factor to generate the requisite solidarity to kill the pipelines may be the moral force of the embattled Ramapough Lenape Nation.

That a company calling itself Pilgrim Pipeline Holdings — complete with the Mayflower’s image for its logo — would choose to run its pipeline through native land should alone be enough to disqualify the project. But such cruel symbolism is nothing new to the Ramapough, a tribe twice rejected for federal recognition by the Bureau of Indian Affairs in the 1990s, largely due to the racist campaigning of one Donald J. Trump. Why did Trump care, you ask? He feared competition for his Atlantic City casino, of course. Since those defeats, weathered by the passage of time, the death of most of its elders, and further isolation in the region, the nation is in a fight for its life. But inspired by the Standing Rock Sioux’s showdown with the Dakota Access Pipeline last year, the Ramapoughs’ resistance to the Pilgrim Pipelines has reunited the tribe behind a common purpose while threatening the pipeline’s political viability.

If it was Trump who stood between the tribe and their due respect twenty years ago, Cuomo occupies that position today. The governor would do well to take a cue from the Ramapough. He could start by recognizing the tribe and the state’s history of violence, insults, and neglect directed their way. He could follow that up with an executive order to protect their land from the extractive industries that would put it in harm’s way. And finally he could declare a moratorium on all new fossil-fuel infrastructure and start New York’s energy transition in earnest. But all that would require leadership and integrity foreign to Cuomo’s ilk. For such qualities, one must look to those with less to lose.