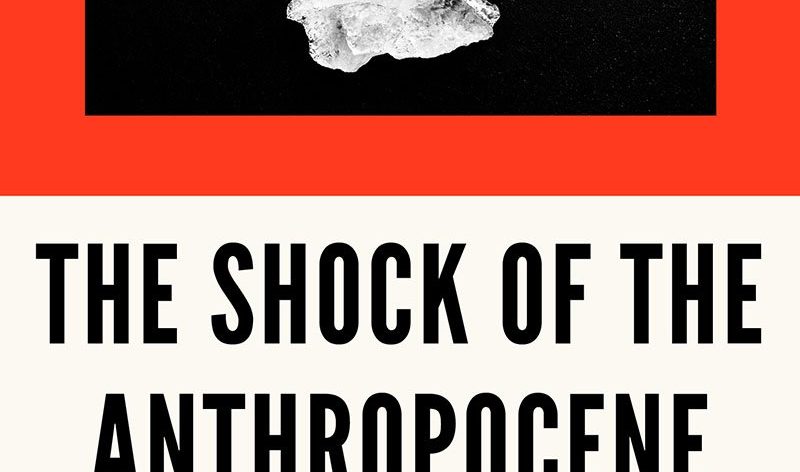 The Shock of the Anthropocene: The Earth, History and Us, Christophe Bonneuil and Jean-Baptiste Fressoz

In February 2000 the Nobel Prize-winning atmospheric chemist Paul Crutzen blurted out during a conference in Mexico, “No! We’re no longer in the Holocene but in the Anthropocene!” His remark initiated a tsunami of scholarship by himself and other scientists, evaluating the merits of a radical proposition: that human impact upon every segment of the Earth system has been so profound and long-lasting that it has catapulted us into a new epoch in our planetary history. In subsequent years the notion of an Anthropocene epoch has captured the imagination not only of physical scientists, but of those who labor in fields as diverse as philosophy, sociology, fiction, the performing arts and other disciplines.

Christophe Bonneuil and Jean-Baptiste Fressoz contribute to this discussion in their volume The Shock of the Anthropocene, aided by David Fernbach’s excellent translation. It should be noted at the outset that they bring the historian’s perspective: both teach history at Paris’s Centre national de la recherche scientifique. Readers of Marx & Philosophy Review of Books may be familiar with the “eco-Marxism” practiced over the past two decades by scholars such as Paul Burkett, John Bellamy Foster and Jason W. Moore, writing that grounds ecological commentary in the materialist analysis of Karl Marx’s and Friedrich Engels’ texts. While Bonneuil and Fressoz largely eschew direct Marxian analysis (aside from Chapter 10, on the “Capitalocene”), their book nevertheless deserves a place in the canon of historical materialism, as it repeatedly shows a devotion to understanding how the ever-changing dynamics of political, economic and social relations have affected the Earth over the sweep of historical time.

In Part One, “What’s in a Word?”, the authors begin with an overview of the many changes to our biosphere constituting irrefutable evidence that human activities have changed our planet, along with suggestions of new deposits to the Earth’s surface—hydrocarbons, plastics, pesticides, nuclear radionuclides, among others—that could be cited for the stratigraphic evidence of a new epoch that geologists require. While acknowledging that the question of exactly when the Anthropocene began is itself problematic (researchers have suggested dates as varied as the beginning of settled agriculture ten millennia ago, Columbus’s “discovery” of the New World, and the “Great Acceleration” since the end of World War Two), they settle upon the assumption that it began approximately a quarter of millennium ago.

Also in Part One is an extended consideration of the ontological divide between the natural (“hard”) sciences and the human (“soft”) sciences that the authors say began in the nineteenth century and continued until about 1960. In this schema, an autonomous, “objective” nature was counterpoised against a society where humans—following the liberal tradition of John Stuart Mill—defined their freedom in terms of their ability to control nature. The Anthropocene, as a reunion of human (historical) and Earth (geological) time, challenges this ontological divide and calls for a new, environmentally-centered humanities that articulates a dialectical relationship between human processes of power and accumulation, and the Earth itself.

In Part Two, “Speaking for the Earth, Guiding Humanity: Deconstructing the Geocratic Grand Narrative of the Anthropocene,” the authors delineate the parameters of what they believe to be the dominant Anthropocene story of post-World War Two modernity, the “Geocratic” narrative. Rooted in both Cold War ideology and systems theory, Geocracy’s main characteristics are: a view of the Earth as a malleable system (which led to the field of systems ecology); an “objective,” abstract perspective on the Earth that sees humans detached from it; a preference for technological solutions to environmental crises; and an assumption that humanity was unaware of its ecological crisis until its recent “awakening” by a scientific and philosophical elite (a group they dub “Anthropocenologists”). James Lovelock, generally regarded as a New Age guru for his authorship of Gaia: A New Look at Life on Earth, was ironically a prime example of Cold War Geocratic culture: he worked first for NASA, then for the CIA during the Vietnam War! Lovelock’s favorable opinion of planetary government and predilection for seeing the Earth as a self-regulating system both arise from a Geocratic worldview.

Concluding Part Two of their study, Bonneuil and Fressoz evaluate the mixed blessings of the grand Geocratic narrative: “The representation of the Earth and its contemporary disarray proposed by the Anthropocenologists must be taken seriously, in two ways. On the one hand, it brings knowledge and warnings that are absolutely essential and indispensable, while on the other, it is a product of Western naturalism and the scientific culture of the Cold War. It cannot be the unique point of view, the unique imaginary of the Earth, or the unique way of inhabiting it collectively and in peace. There are multiple narratives about the change of existential regime under way on our Earth.” (87)

Part Three, “What Histories for the Anthropocene?” (occupying nearly two-thirds of the book) presents a series of seven counter-narratives, all of them tagged with the “cene” suffix to underscore their status as Anthropocene alternatives. Bonneuil and Fressoz emphasize that these seven are not exhaustive of the possible alternatives to the Geocratic; they write, “we must make sense of what has happened to us, producing multiple, debatable and polemical narratives rather than a single hegemonic narrative that is supposedly apolitical. Rather than a universal history of the ‘human species’ distorting the ‘Earth system,’ we have proposed seven historical workshops, seven possible narratives.” (289) This reviewer lists the title of each with a brief accompanying description below, to offer a sense of how widely these perspectives vary:

“Thermocene: A Political History of CO2”: It is important to “denaturalize” the history of energy, i.e., to recognize that the West’s succession of primary energy sources does not follow any clearly logical path toward greater efficiency; rather, energy choices are often made to satisfy political imperatives, which are then perpetuated by regulatory frameworks and the need to protect investments.

“Thanatocene: Power and Ecocide”: Every developmental stage of the modern military-industrial complex has been fraught with environmental externalities. “By learning to kill humans in an efficient fashion, the military have also learned to kill living things in general.” (130). Many inventions that wreak havoc on the Earth—ammonium nitrate, napalm, Agent Orange, depleted uranium—originated from military R&D.

“Phagocene: Consuming the Planet”: Rise of “consumerism” in modern Western culture has contributed in many ways to the Earth’s degradation: planned obsolescence of commodities discourages repair and recycling; “dematerialization” of economics (GDP as measure of growth, for example) encourages the attitude that consumption could proceed indefinitely without physical limits; rise of industrialized agricultural practices undermines biodiversity, increased use of artificial fertilizers and pesticides, and massively alters land use by encouraging deforestation.

“Phronocene: Grammars of Environmental Reflexivity”: Presents a typology of what the authors call “environmental grammars” showing that Western destruction of the biosphere has not been inadvertent, but has occurred despite the prudence (phronesis, in Greek) recognized by many. The six grammars are: “Circumfusa” (surrounding things); Climate; Nature’s Economy; Nature-Society Metabolisms; Thermodynamics; Limits.

“Agnatocene: Externalizing Nature, Economizing the World”: This narrative takes its name from “agnatology,” the academic field which studies the production of ignorance. The authors cite several examples, including: discovery of coal encouraging the notion that the Earth’s store of resources was limitless; use of nineteenth century political economists’ arguments to justify whatever oppressions of labor, pollution and lack of regulation the emerging fossil capitalist class chose to employ; attitude of twentieth-century “green capitalism” that all environmental crises are market failures that can be corrected by setting a price on nature.

“Capitalocene: A Combined History of Earth System and World-System”: Posits that capitalism has been the West’s determining ecological/social relation since capital relations became dominant during the “long sixteenth century” (ca. 1450-1650). Key to capitalist development of the First World—and underdevelopment of the Third—has been “unequal ecological exchange,” whereby states of the world-system’s periphery have been compelled to export an increasing quantity of natural resources (embodying more labor-power) to receive back the same amount of finished goods from core states.

“Polemocene: Resisting the Deterioration of the Earth Since 1750”: Reviews “environmentalism of the poor” movements that have resisted the Anthropocene for the past quarter-millennium by promoting social and ecological justice. Prime examples from a chronological perspective include: the communal rights to the forest movement of the late eighteenth and early nineteenth centuries; the preservation, conservation and “back to nature socialism” movements of the later nineteenth century that included figures as diverse as William Morris and John Muir; the Red/Green environmental movement in the U.S. in the 1960s and 1970s; the “Buen Vivir” movement in Latin America in the 1980s and 1990s.

While this overview may suggest a dizzying array of perspectives on the Anthropocene, the authors’ ultimate purpose is not to induce vertigo but to liberate us from a single, geocratically circumscribed perspective. If we are to find a way to a truly sustainable future for the Earth, they suggest, we need not only to understand the multiple metabolisms of production, exchange and consumption at play over time, but also to acknowledge the forces that have contributed to ecological degradation by normalizing the intolerable. “The less that the science of the Anthropocene pretends to stand above the world,” they write, “the more solid and fruitful it will be, and the less the seductive concept of the Anthropocene will risk serving as a legitimizing philosophy for an oligarchic geopower.” (288) Such a perspective would surely be liberating for both humans and the Earth.