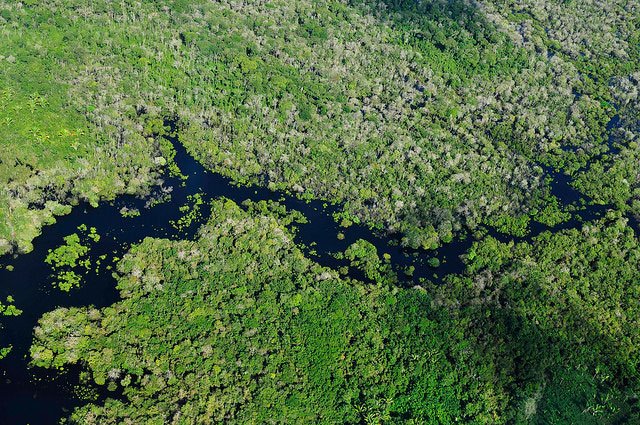 Camp 41, Brazilian Amazon — Less than 30 years ago, the Earth’s tropical rainforests held the carbon equivalent of half of the entire atmosphere. But as atmospheric CO2 has escalated along with the deforestation of so much of the tropics, that is no longer the case. Nevertheless, carbon stored in tropical rainforests is still significant. According to NASA, “In the early 2000s, forests in the 75 tropical countries studied contained 247 billion tons of carbon. For perspective, about 10 billion tons of carbon is released annually to the atmosphere from combined fossil fuel burning and land use changes.” This is one of the countless reasons why losing them would be catastrophic to life on Earth.

I’m writing this dispatch just having emerged from the heart of the Amazon, the most biodiverse place on the planet. I was fortunate enough to spend some time with Tom Lovejoy, known as the “Godfather of Biodiversity,” at the famous Camp 41, which is filled with researchers and scientists. Throughout our conversations, Lovejoy emphasized the staggering amount of biological diversity in the Amazon, which has thousands upon thousands of species of trees, fish, birds, plants and astronomical numbers of insect species.

“We’ve only scratched the surface, and are discovering new species of birds all the time,” said Lovejoy, who was the first person to use the term “biological diversity” in 1980 and made the first projection of global extinction rates in the “Global 2000 Report to the President” that same year.

Lovejoy, who founded the public television series “Nature” and is now a senior fellow at the United Nations Foundation and a professor of environmental science and policy at George Mason University, views anthropogenic climate disruption (ACD) from the perspective of the fact that we are essentially “social primates.”

“We are so stuck on ourselves, we don’t consider the fact that the life sciences are a giant library that is continually acquiring new volumes,” Lovejoy explained. “It’s like we are just a bunch of social primates mutually grooming each other while the environmental lion sneaks up.”

Lovejoy warns that as ACD progresses and temperature limits continue to be exceeded, we are losing parts of the biosphere that we don’t even know exist.

Here in Brazil, I learned of a January 2016 science expedition of 50 scientists who spent 25 days in a remote area of the Amazon and discovered 80 new species.

Lovejoy posed a question for me, that is a warning to us all: “So what does it matter if we go over these limits and lose a few books in the biological library?”

He warned that as we keep removing books from the library — in other words, causing extinctions — we do not know which book(s) could cause a biological death spiral that could bring down the entire system.

An overview of some of the more stunning scientific reports and climate developments underscore this.