"This is what arts and resistance looks like in San Francisco!" declared one of the many groups involved in the collective action. "Shutting down 2 blocks of SF’s financial district to disrupt climate profiteers!"

“Yesterday was so fulfilling! Waking up before dawn & spending the day shutting down the SF Financial District with my friends, painting two full city blocks with 11 #ClimateChange murals in creative civil disobedience. 36 affinity groups did blockades which shut down Bank Of America, Citibank, Chase, US Bank, and protested Bolsonaro at the Brazilian Consulate.” —Joshua Kahn Russell, street painting volunteer

The morning is still cool at 7am.  The mural crew meets up at Market and Montgomery streets to go over the morning’s plan. We’ve measured and counted and practiced for the last month, but the shape of the day ahead is still unknowable. Everyone seems game, enthusiastic, up for what comes. We all walk a few blocks through Wall Street West, center of San Francisco’s financial district. The streets are beginning to be blocked off for the day by members of the 1000 Grandmothers and many others. The four intersections are defined by 32 foot cloth banners, by wooden facsimiles of oil derricks, by people who came prepared to stand all day so mural painters can fill the streets with art. 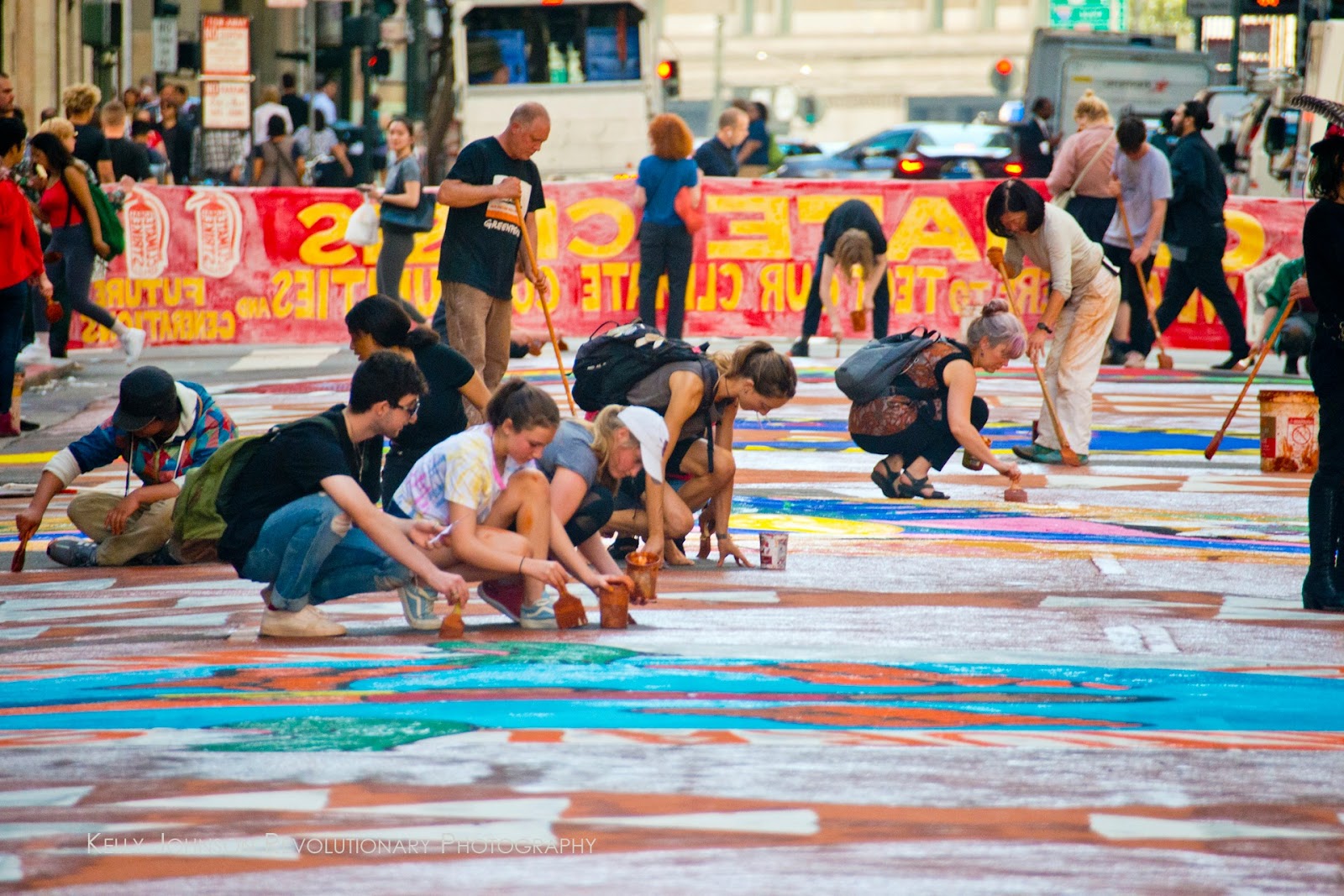 In these two blocks, lined by some of SF’s biggest banks, eleven community groups are about to paint their visions of solutions to climate chaos.  Five hundred or so brushes are lined up ready for paint as people first chalk out circles and center marks for each of the 25 foot murals. Some people chalk around a plywood template to mark the basket weave pattern, designed by local indigenous artist Ed Willie, to be painted as a border around the mural groups' circles. 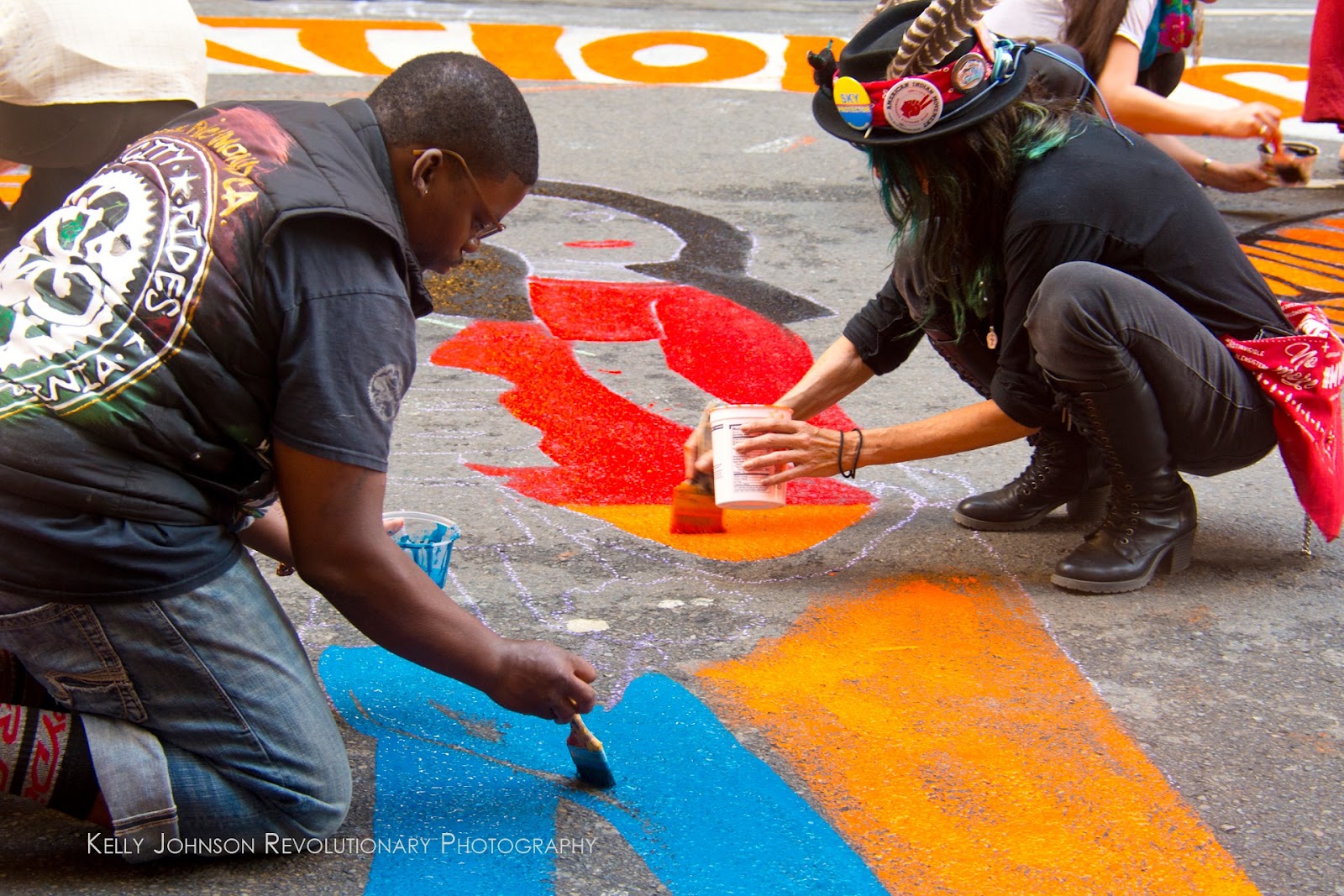 As the mural designs come to life, radiant images appear in the street—there’s a rising feeling of tenderness and amazement. Each group has thought about how to show what they see as a powerful solution to climate harm. All day people ask, "Do you need any help?" 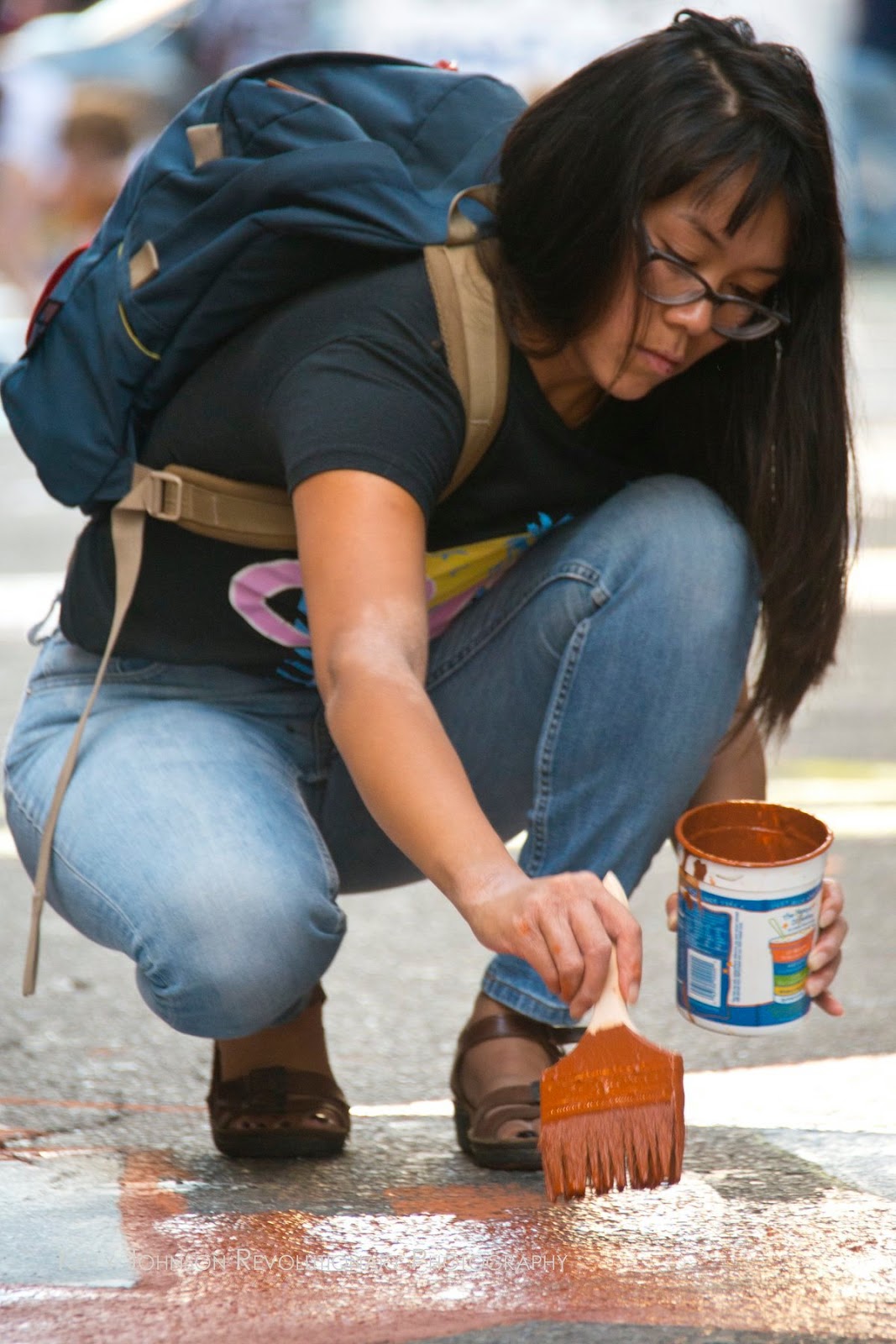 Gradually, hundreds of hands fill in the border with natural clay paint from the Sierra foothills.  It was our plan to fill the street edge to edge, but it’s unexpectedly moving to actually see the Miwok red clay blanketing dark asphalt.

A work crew of three guys stands chatting on the sidewalk; one of them steps in and picks up a brush. People walking by say thanks to those who now look paint-covered.

A woman tells us she works in one of the highrises, and asks if the painting will be permanent. We start to explain that it's temporary art. She says, "I wish it wasn't. I'm coming back on my lunch to help you paint." 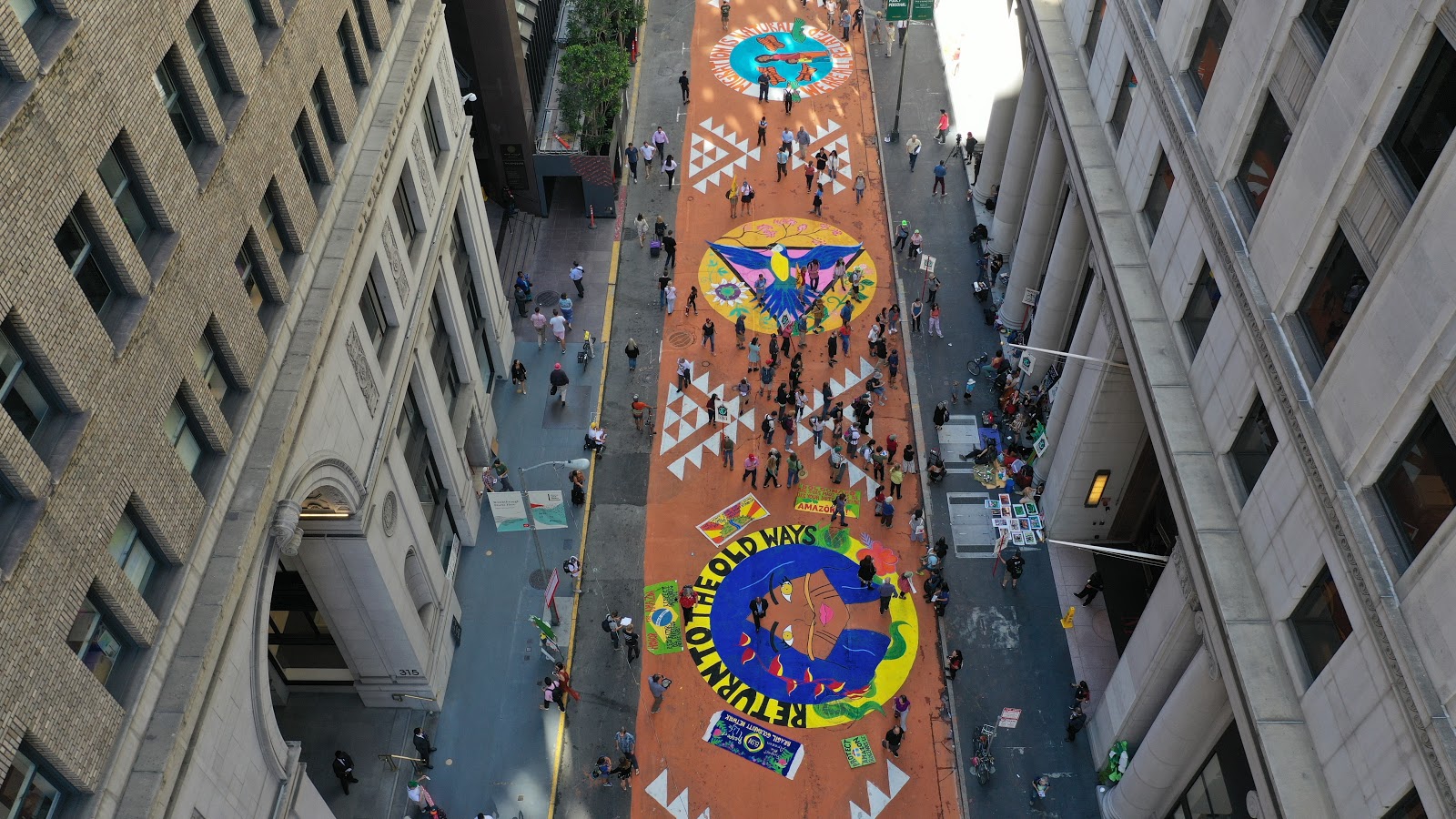 These murals call for justice and advocate for solutions to the climate crisis.  Each mural group answered the question, "What is a solution to climate chaos and injustice in your community?" They were created by a range of community organizations and youth groups, who created the designs and coordinated the painting. The groups and statements are listed below. The murals were mostly painted with natural paint made from Ione Miwok Red Clay from the Sierra foothills and also children's-type colored tempera paints.

As we write this on the last day of the Sept 20-27 global climate strikes the Global Climate Strike coalition says, "At a total of over 7 million and still counting, the week of Global Climate Strikes is on par with the 2003 anti-Iraq war protest as one of the largest coordinated global protests in History. From September 20th to 27th, millions of students, parents, trade unions, businesses, health workers, scientists, celebrities, people of all backgrounds, ages, regions and faiths came together in all corners of the globe calling for climate action."

"We are surrounded by the financial institutions that profit from climate chaos, and the government offices responsible for the climate crisis. We disrupt today to stop catastrophic climate disruption tomorrow, and to support future generations."

After two massive student climate strikes in March and May, the next climate was strike called: "Starting on Friday 20 September we will kickstart a week of climate action with a worldwide strike for the climate. We're asking adults to step up alongside us. It is time for all of us to unleash mass resistance – we have shown that collective action does work. We need to escalate the pressure to make sure that change happens, and we must escalate together."

The overall project was coordinated with the Climate Justice Street Mural Project, which the pair of us lead with a team of artists and activists. The Map and Program created for the event read, "We paint these solutions in the middle of 'Wall Street West,' as Montgomery Street is nicknamed. We are surrounded by the financial institutions that profit from climate chaos, and the government offices responsible for the climate crisis. We disrupt today to stop catastrophic climate disruption tomorrow, and to support future generations."

The Climate Strike street murals were part of a mass nonviolent direct action initiated by Idle No More SF Bay, Extinction Rebellion SF Bay, Diablo Rising Tide, 1000 Grandmothers, and the Society of Fearless Grandmothers, coming together as Climate Justice SF.  Climate Justice SF issued a call to action, reading in part, "On September 25th, we name those responsible for destroying life as we know and need it.  We'll begin weaving a new web of community-oriented and earth-based solutions, putting on large display the depth and breadth of our love for this planet and for all the generations to come. We are calling for you to speak the truth of our awakening to all those who are still caught in the nets of profit. Come disrupt business-as-usual in the offices of those institutions profiting off the destruction of the system of life we need to simply survive. We are inviting you to help create street murals, each one representing a part of the whole vision we have for our immediate transformation. Come dream, paint, and teach our community how we move forward at this moment in time."

For seven years, communities and movements in the San Francisco Bay Area have painted street murals for social justice and climate justice, with clay from the Sierra foothills and non-toxic tempera paints. Last year, 55 groups painted climate solutions murals over 5 blocks as part of Rise for Climate Justice, also coordinated by the Climate Justice Mural Project.

Through trainings and encouraged by a Street Mural Guide, painting street mural as a participatory part of actions is spreading to groups across North America, like this one in Victoria, BC.

This was the Climate Strike Street Mural Map-Program created for the day: 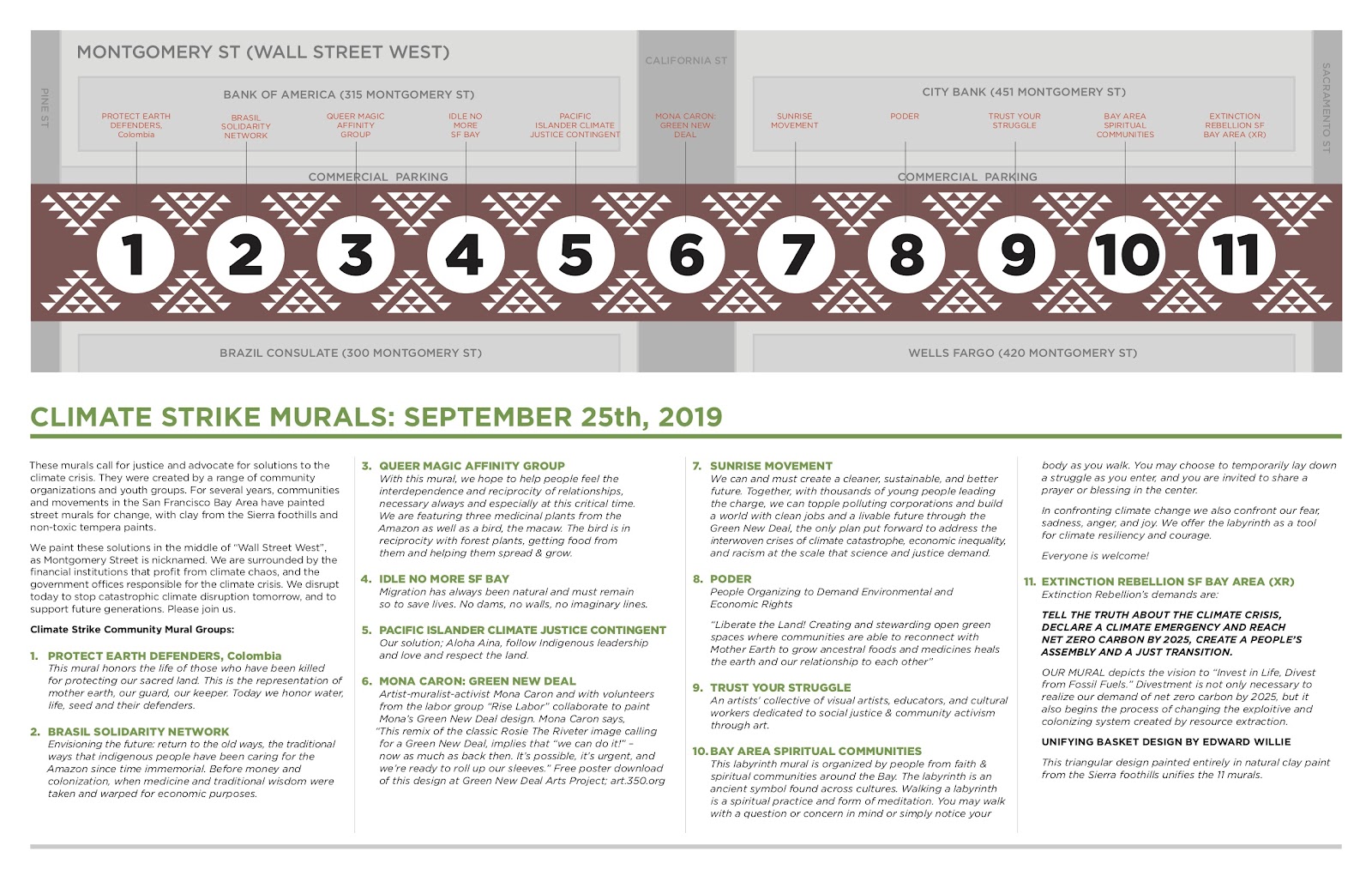 The Groups Behind the Murals:

We had a terrific time joining the protest and blockade the other day! It was hugely gratifying for ColombiaConexion to spread the word about one of the most urgent calls in the global south: Defending the life of social leaders who protect the environment. We believe this was relevant as not everybody sees and comprehend the magnitude of the ongoing genocide in Colombia, Brazil, and other countries like the Philippines and Mexico. The land defenders are mandated to be the ones who keep the voice of the ancestors alive. Frontline communities are being killed for disrupting and protesting about water sovereignty and land reform in our countries. It feels indeed a privilege to take over the streets of one of the major cities in the States and do what we did. Art represents the most compelling narrative to bring these issues to the people, and now we have the tools as a collective to make it happen.

This mural is the result of a collective effort, the sum of many frustrations. Frustration with policies and governments that are only interested in overworked humans and exploitation of nature and life. I never painted a mural before, and after this experience I feel that art is the only honest way to help us express ourselves, raise awareness and demand change! This experience reinforced in me the importance of working in community, and inspired me to continue opening spaces to dialogue about what the solutions are to the current climate crisis and how humans should contribute to more creative initiatives that protect life. Life is sacred. 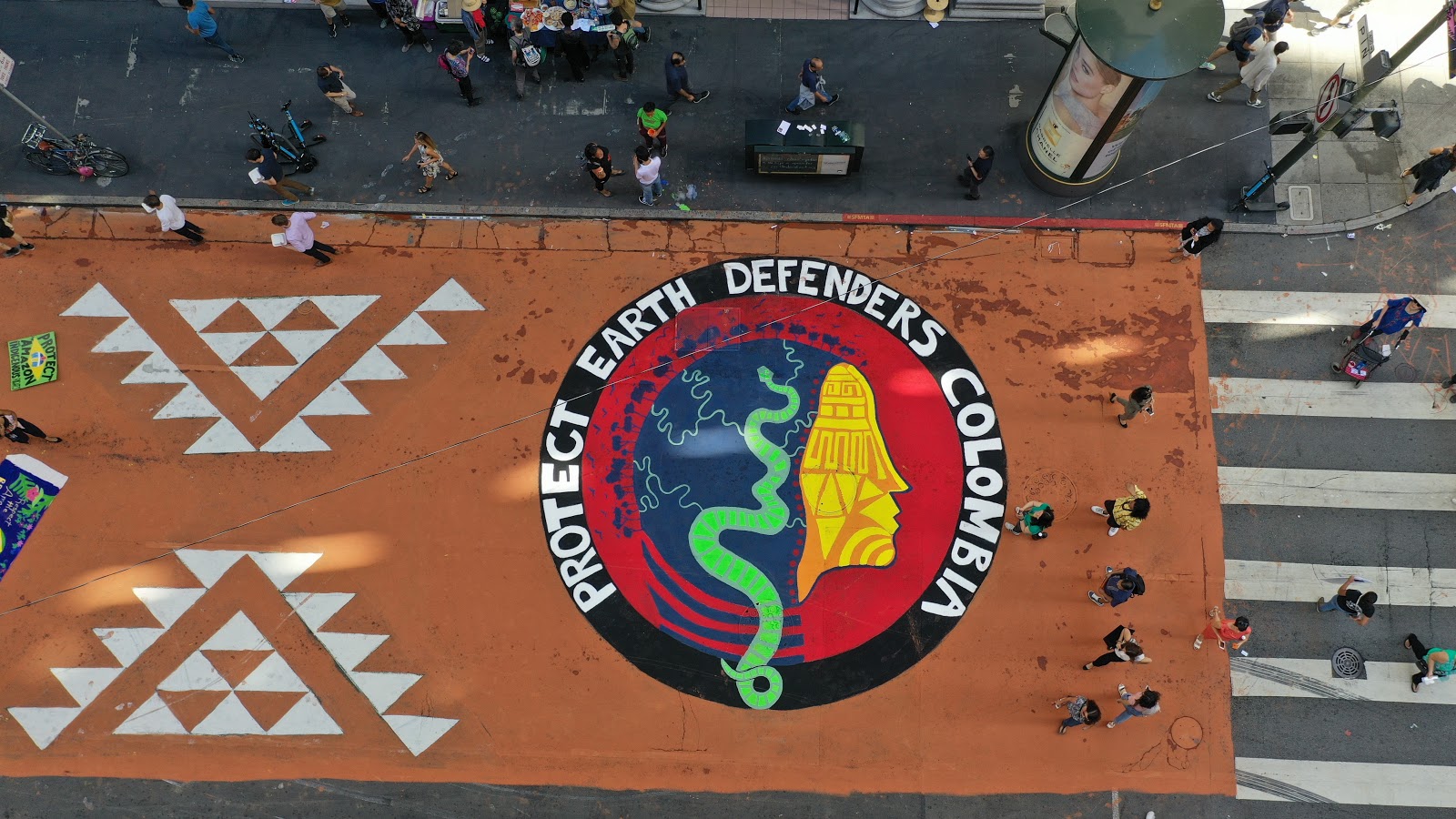 Envisioning the future: return to the old ways, the traditional ways that indigenous people have been caring for the Amazon since time immemorial.  Before money and colonization, when medicine and traditional wisdom were taken and warped for economic purposes. 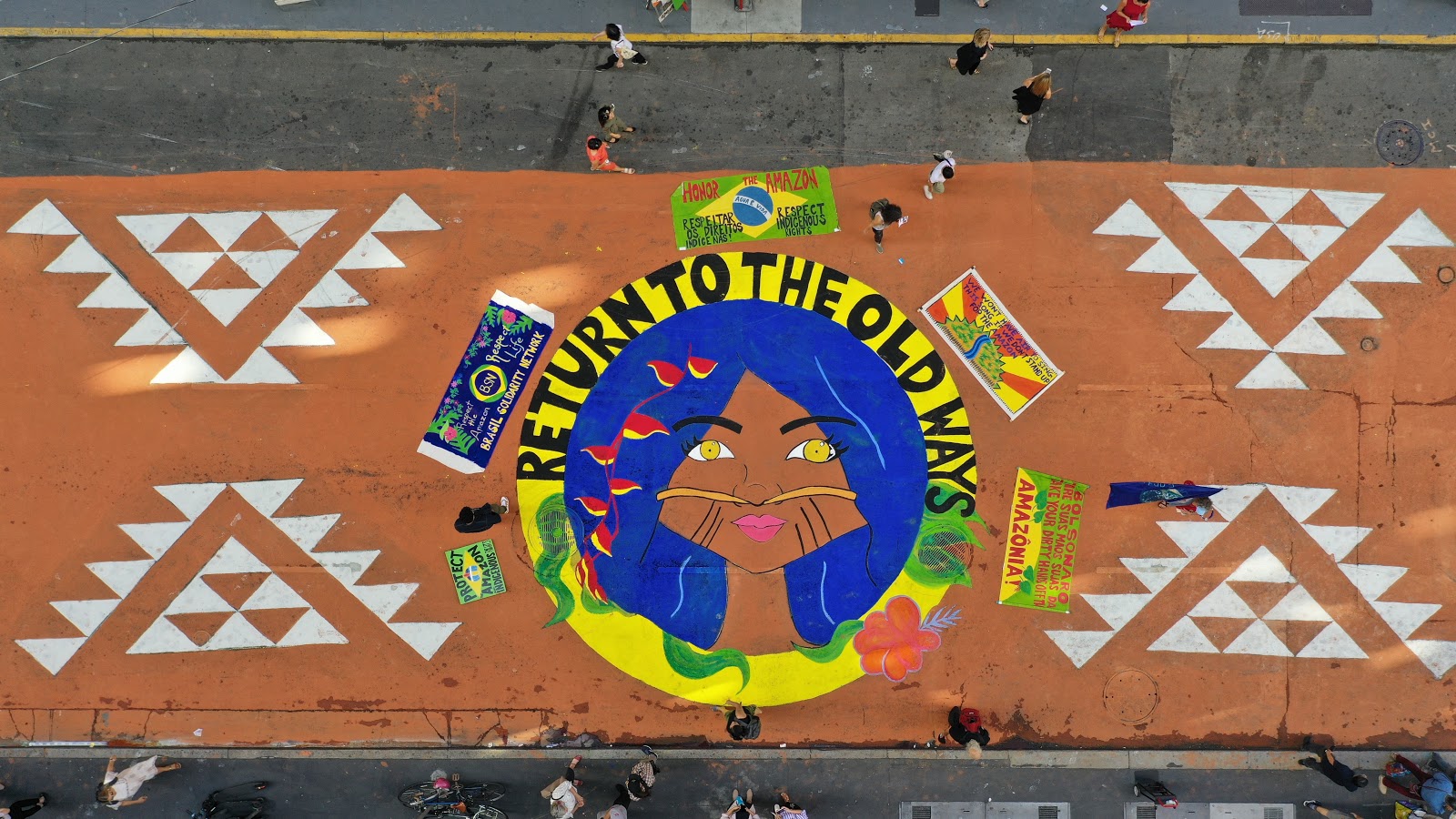 With this mural, we hope to help people feel the interdependence and reciprocity of relationships, necessary always and especially at this critical time. We are featuring three medicinal plants from the Amazon as well as a bird, the macaw. The bird is in reciprocity with forest plants, getting food from them and helping them spread and grow. 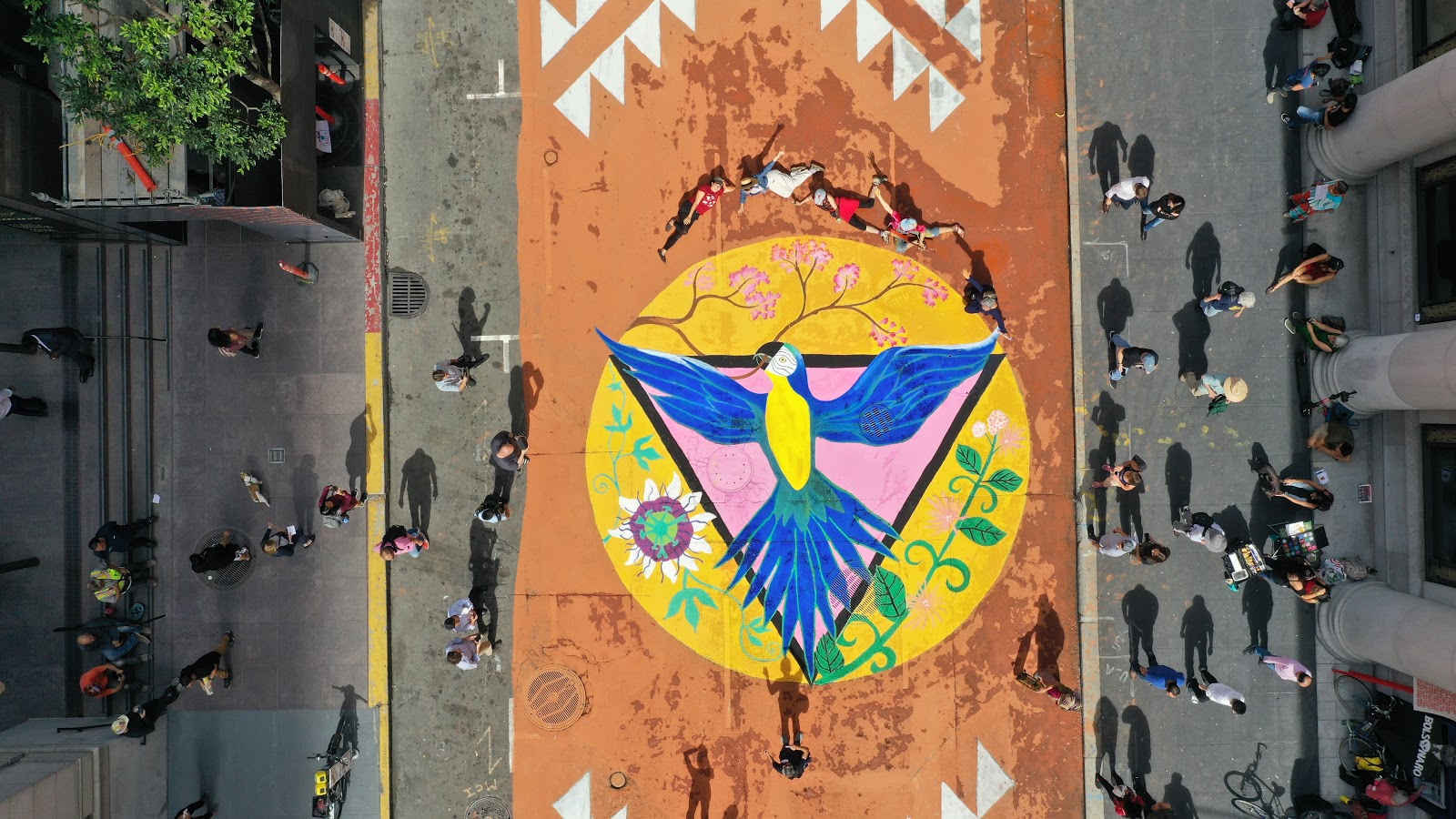 Migration has always been natural and must remain so to save lives.  No dams, no walls, no imaginary lines. 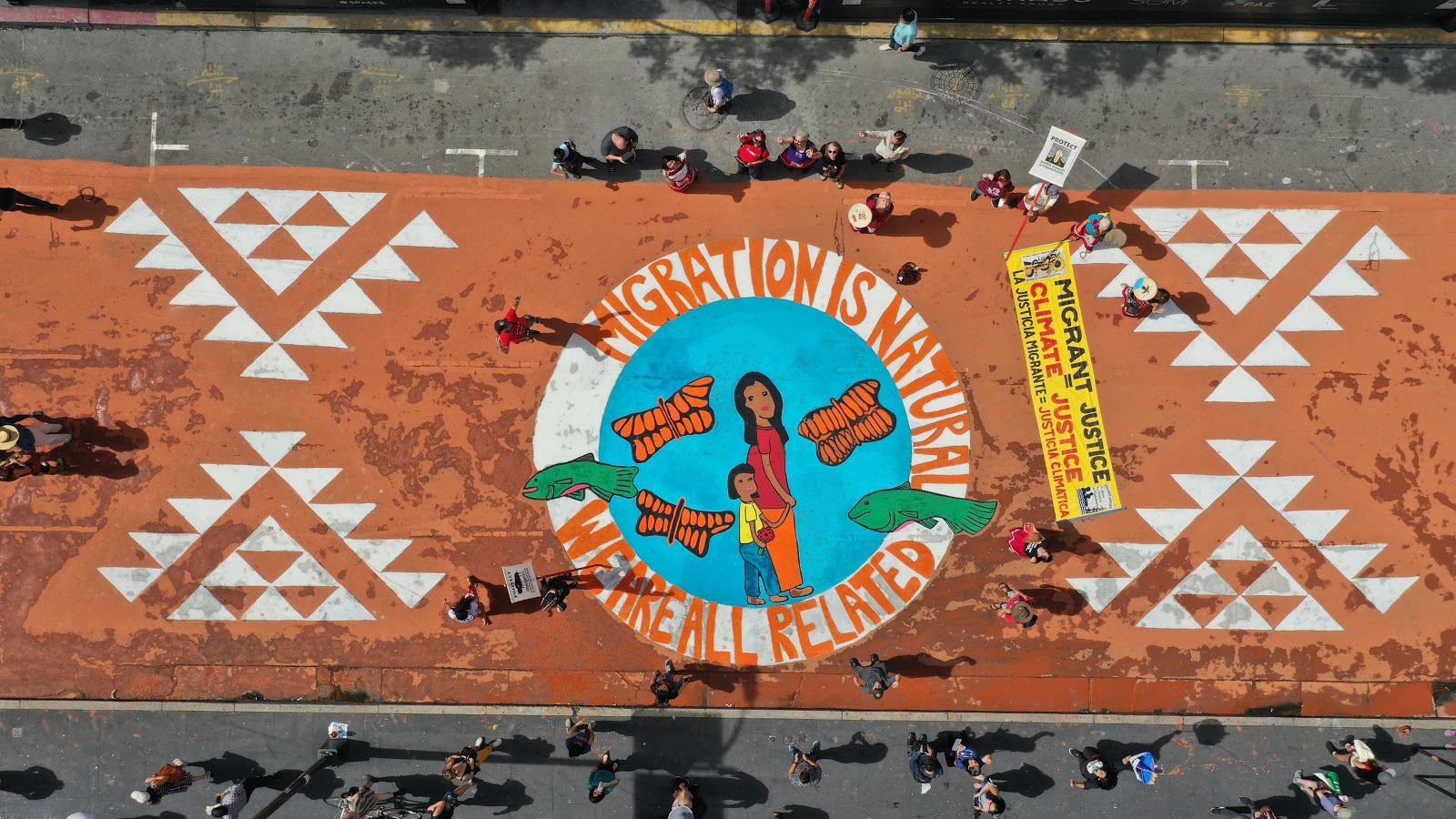 Our solution; Aloha Aina—follow Inidgenous leadership and love and respect the land. 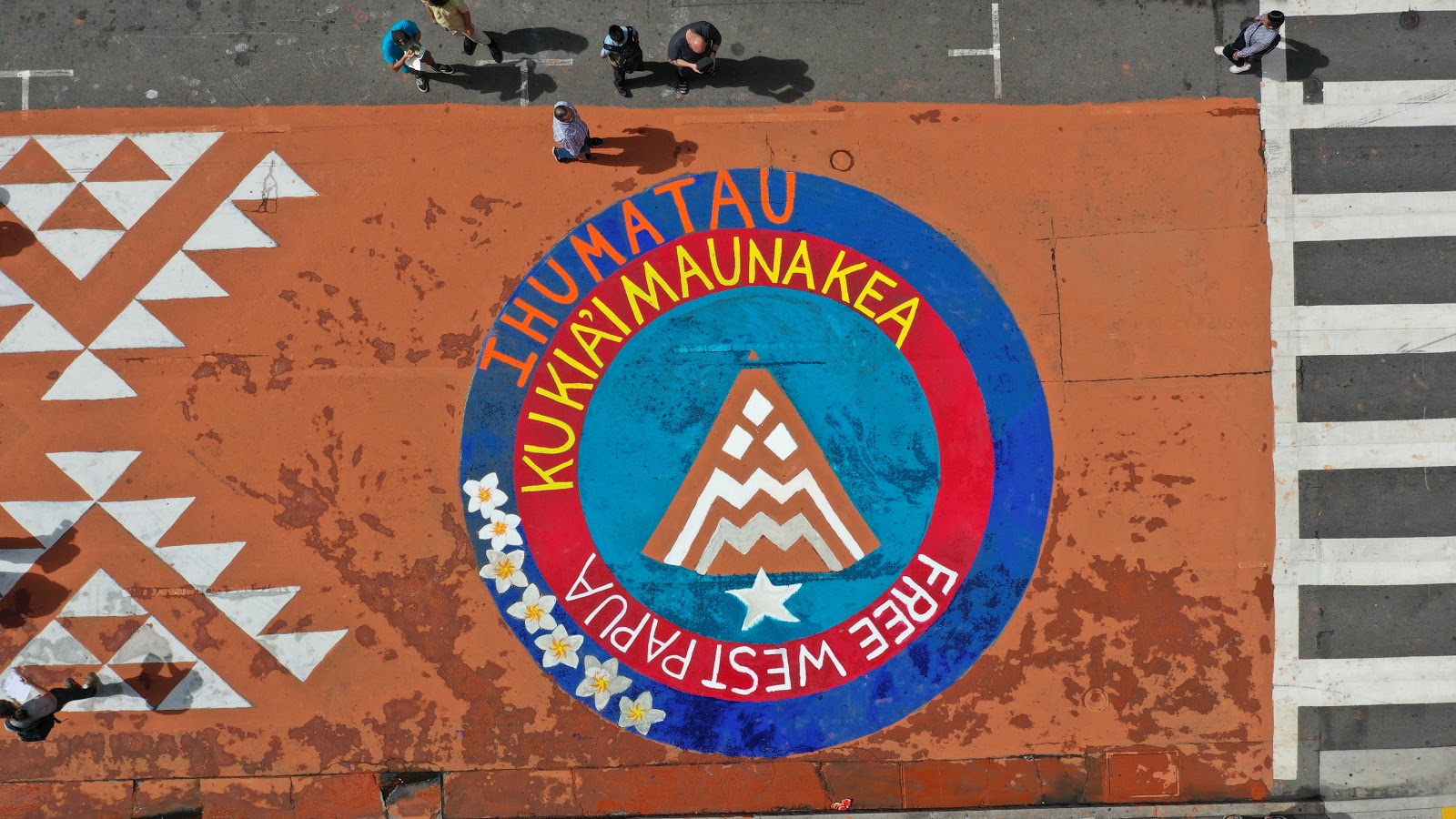 Artist-muralist-activist Mona Caron and activist labor group “Rise Labor” collaborate to paint Mona’s Green New Deal design. Mona Caron says, “This remix of the classic Rosie The Riveter image calling for a Green New Deal, implies that “We can do it!”—now as much as back then. It’s possible, it’s urgent, and we’re ready to roll up our sleeves.” (Free poster download of this design available at Green New Deal Arts Project; art.350.org). 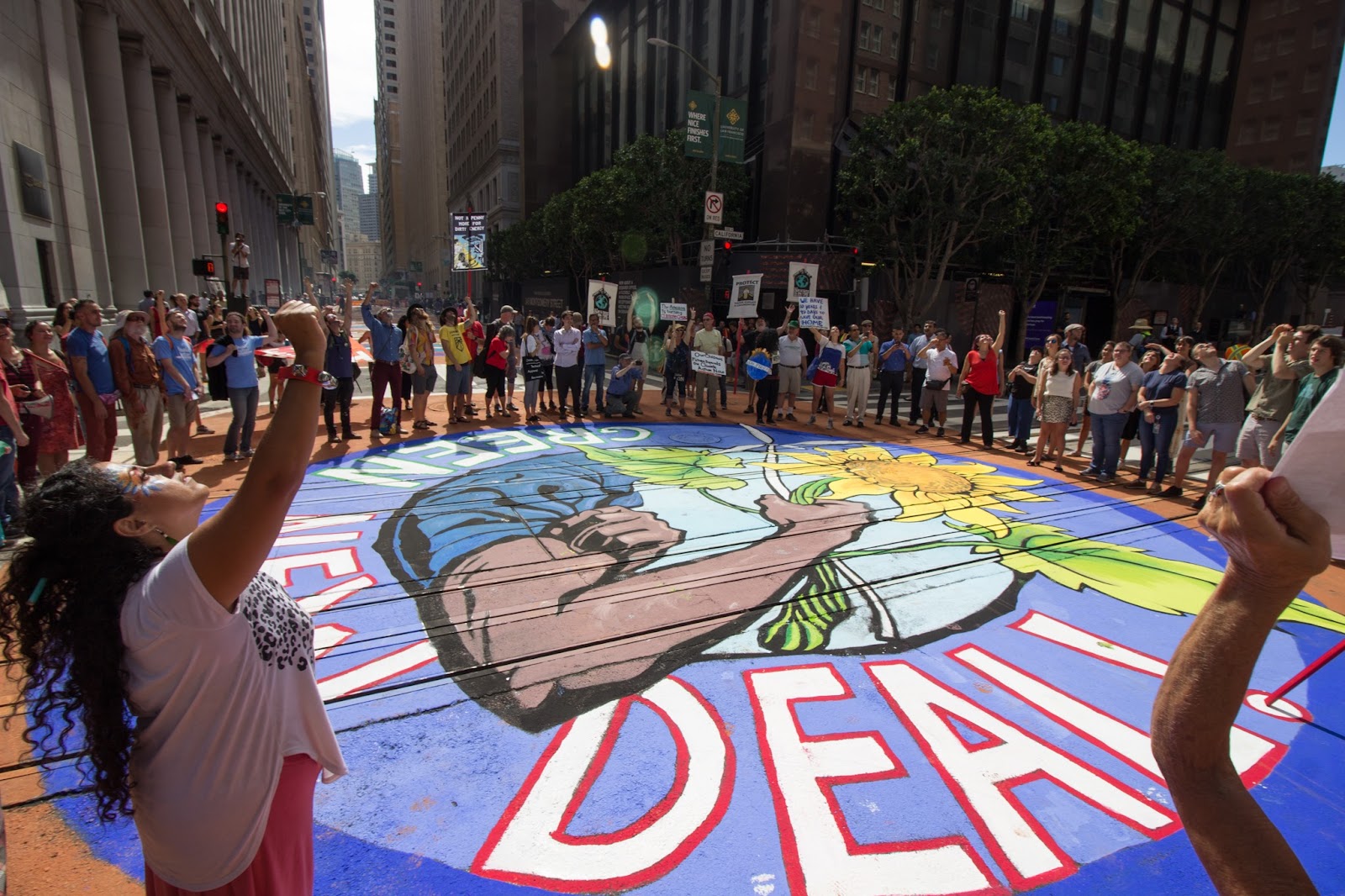 We can and must create a cleaner, sustainable, and better future. Together, with thousands of young people leading the charge, we can topple polluting corporations and build a world with clean jobs and a livable future through the Green New Deal, the only plan put forward to address the interwoven crises of climate catastrophe, economic inequality, and racism at the scale that science and justice demand.

In their Instagram post of the murals, Sunrise Movement writes, "Political organizing demands imagination. Whether it's expressed through art or science fiction, we must be able to envision a future filled with beauty. We must be able to hope. We're not just fighting to avert the climate crisis. We're fighting for a future we believe in." 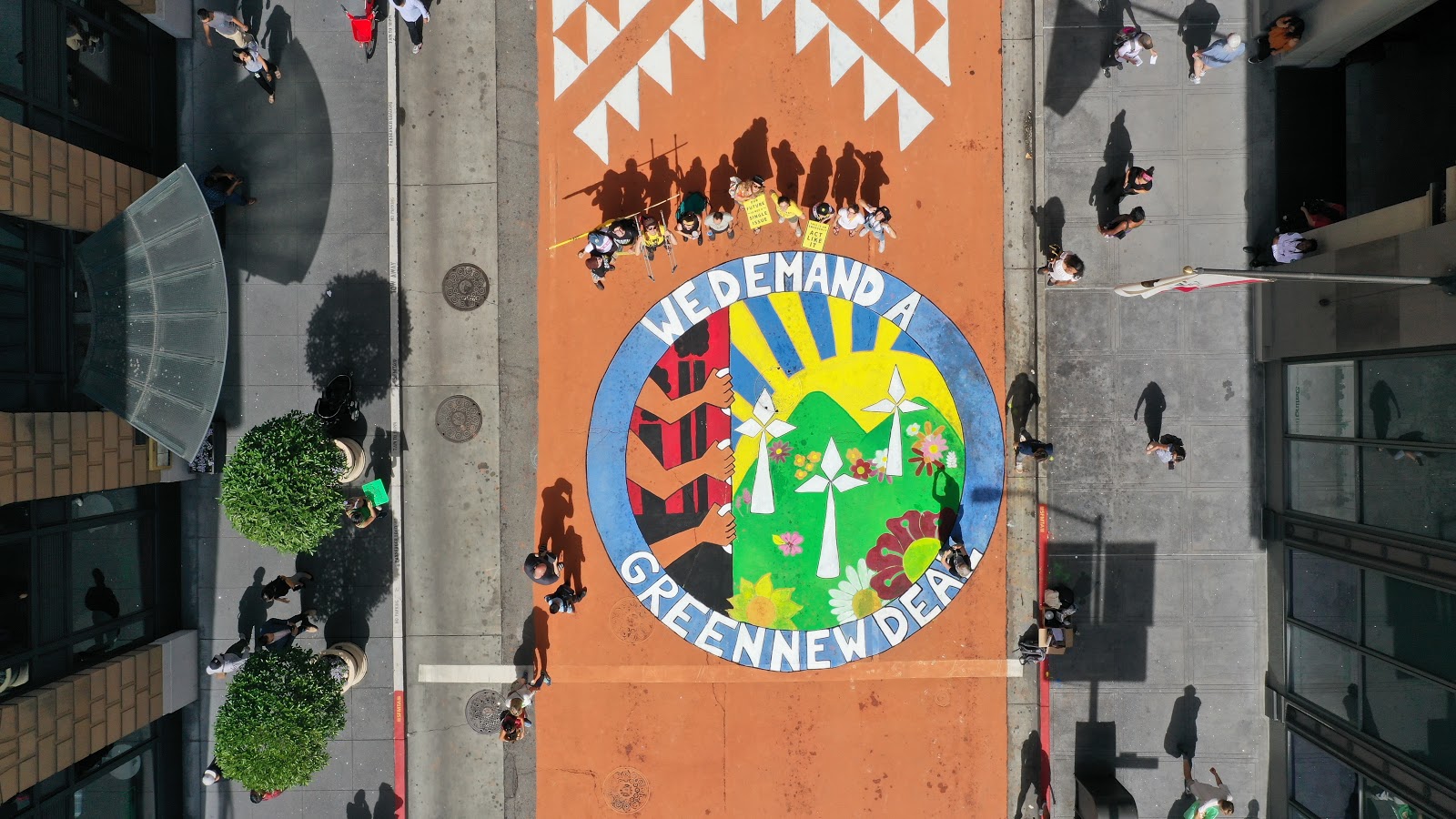 From mural co-organizer Anita Kline: "Amazing, heart-opening day. Thanks to our mural painters from spiritual communities and to the many who saw the 'welcome' arrow, wrote prayers for Mother Earth, and walked the labyrinth we painted, whether in bare feet or high heels." 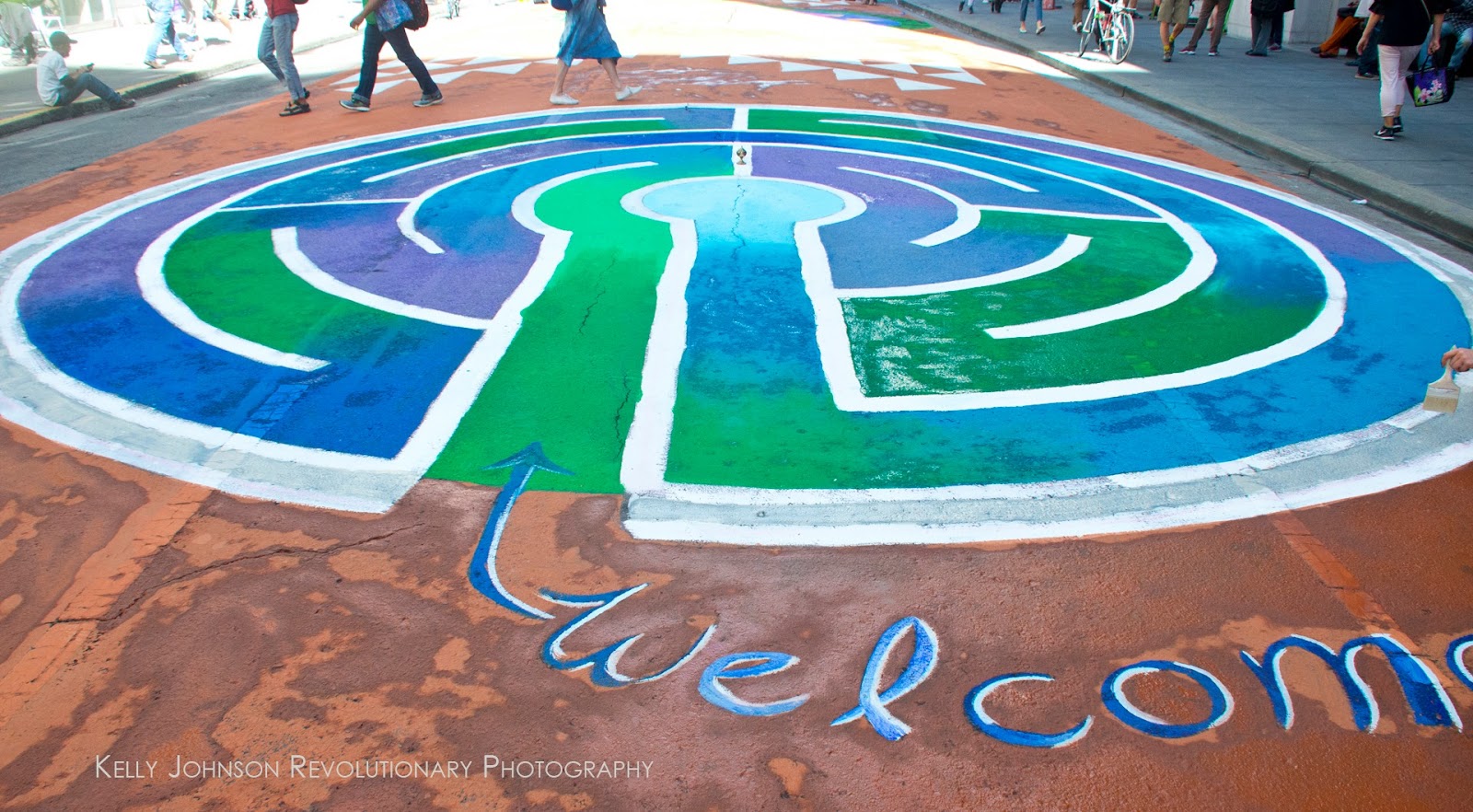 “The Trust Your Struggle Collective painted a mural in colored clay as grandmothers locked themselves to the doors of Wells Fargo Bank in SF’s Financial District. The mural depicts a black snake, symbol of the pipelines being built across the Americas, cut into pieces with sustainable energy growing from its wounds.”

“Whose streets?! Our streets!”

Business as usual was disrupted yesterday with hundreds of people demanding climate justice at San Francisco’s financial district. Doors to bank were blocked and the streets were painted with earth- based paints with images of the sustainable future we want to grow. 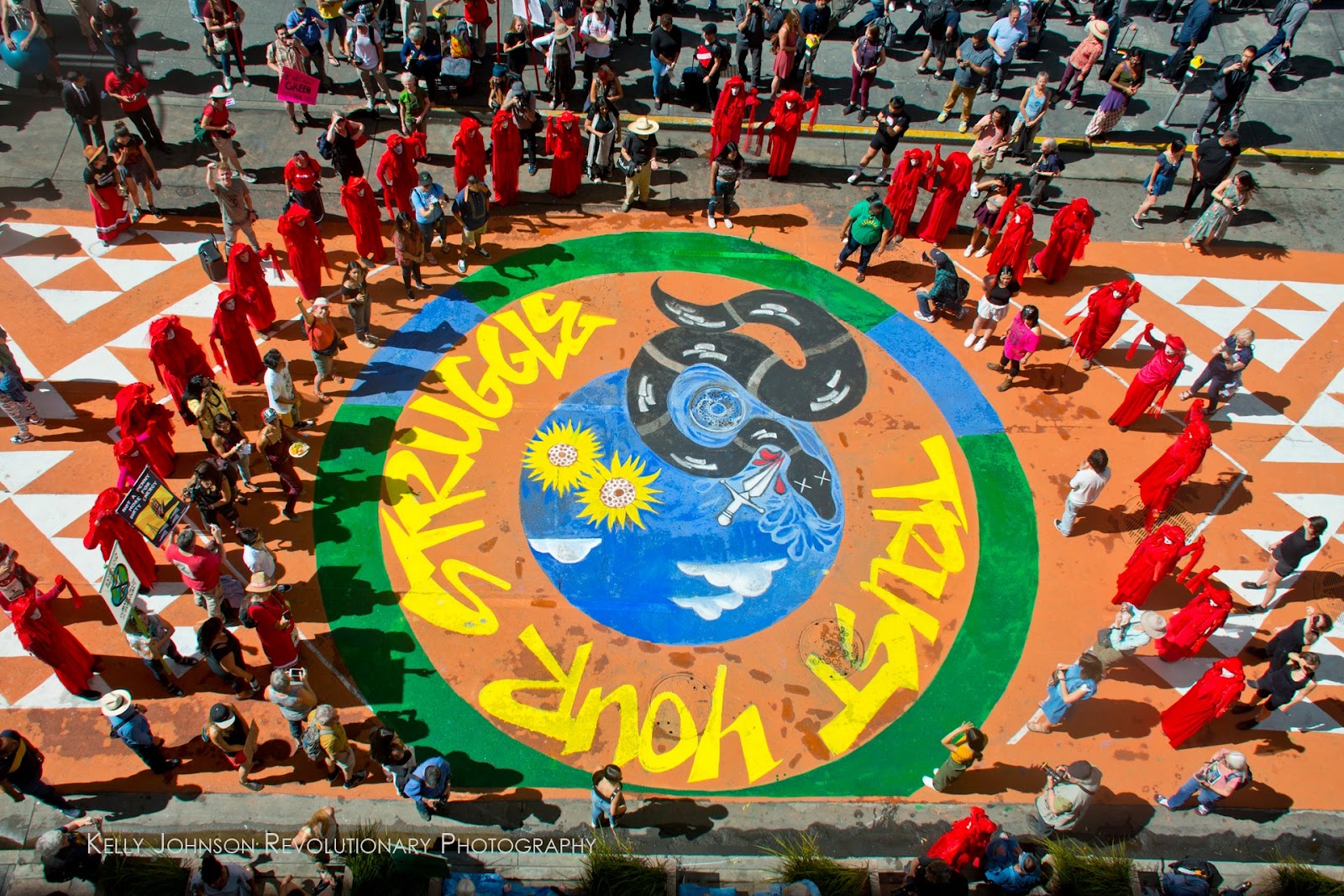 Our mural, “Liberate the Land/ Libera la Tierra” acknowledges that in order to truly combat this climate crisis, our solutions must be in harmony with Mother Earth and stewarded by communities first and worst impacted.

Through reclaiming lands like @hummingbird_sf, we are able to connect to the foods and medicines that heal us, and rebuild connections to one land and one another. 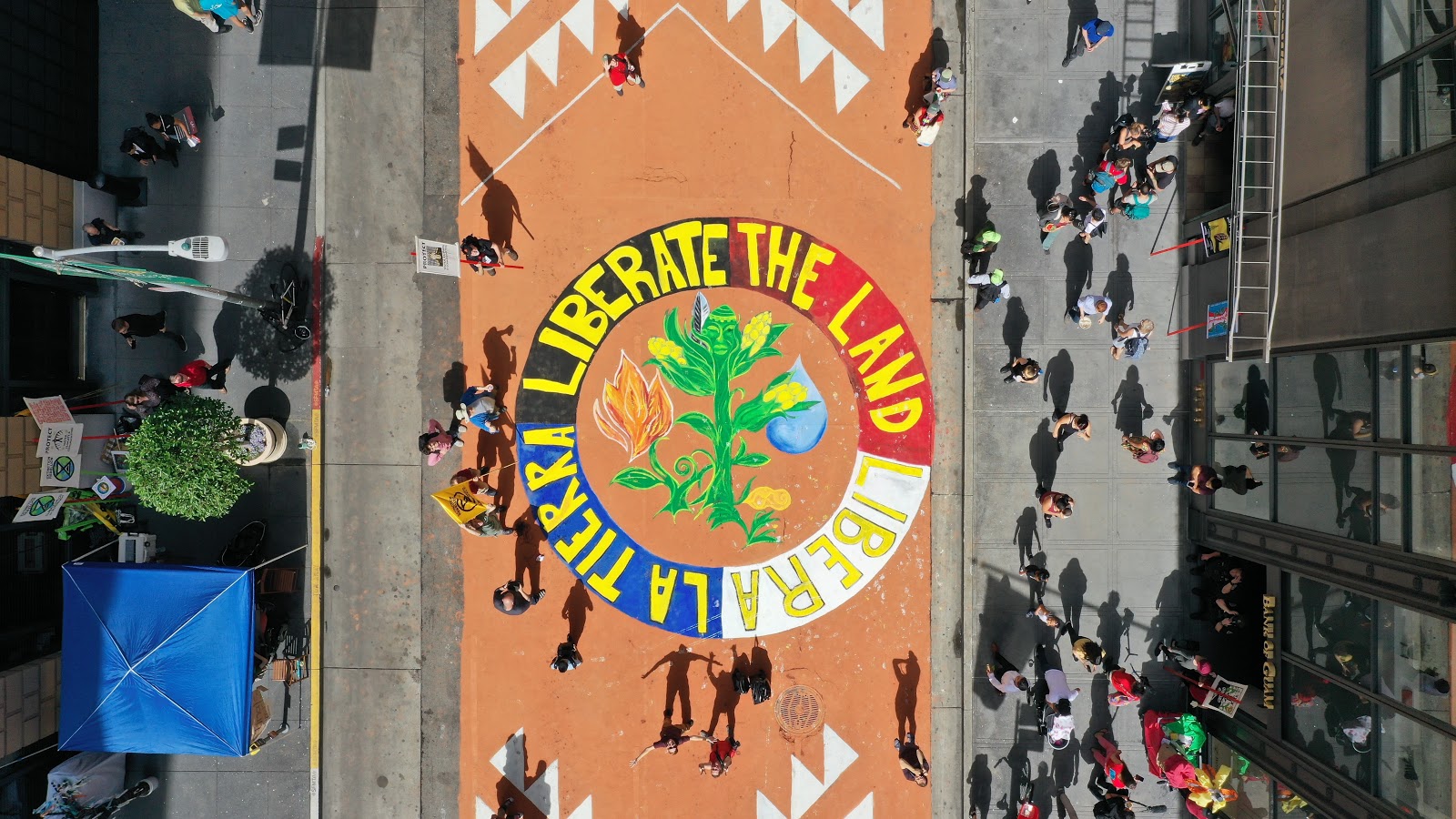 Our demands are: Tell the Truth About the Climate Crisis; Declare a Climate Emergency and Reach Net Zero by 2025; and Create a People's Assembly and a Just Transition.

Our mural depicts the vision to "Invest in Life, Divest from Fossil Fuels." A divestment is not only necessary to realize our demand of net zero carbon by 2025, but it also begins the process of changing the exploitive and colonizing system created by resource extraction. 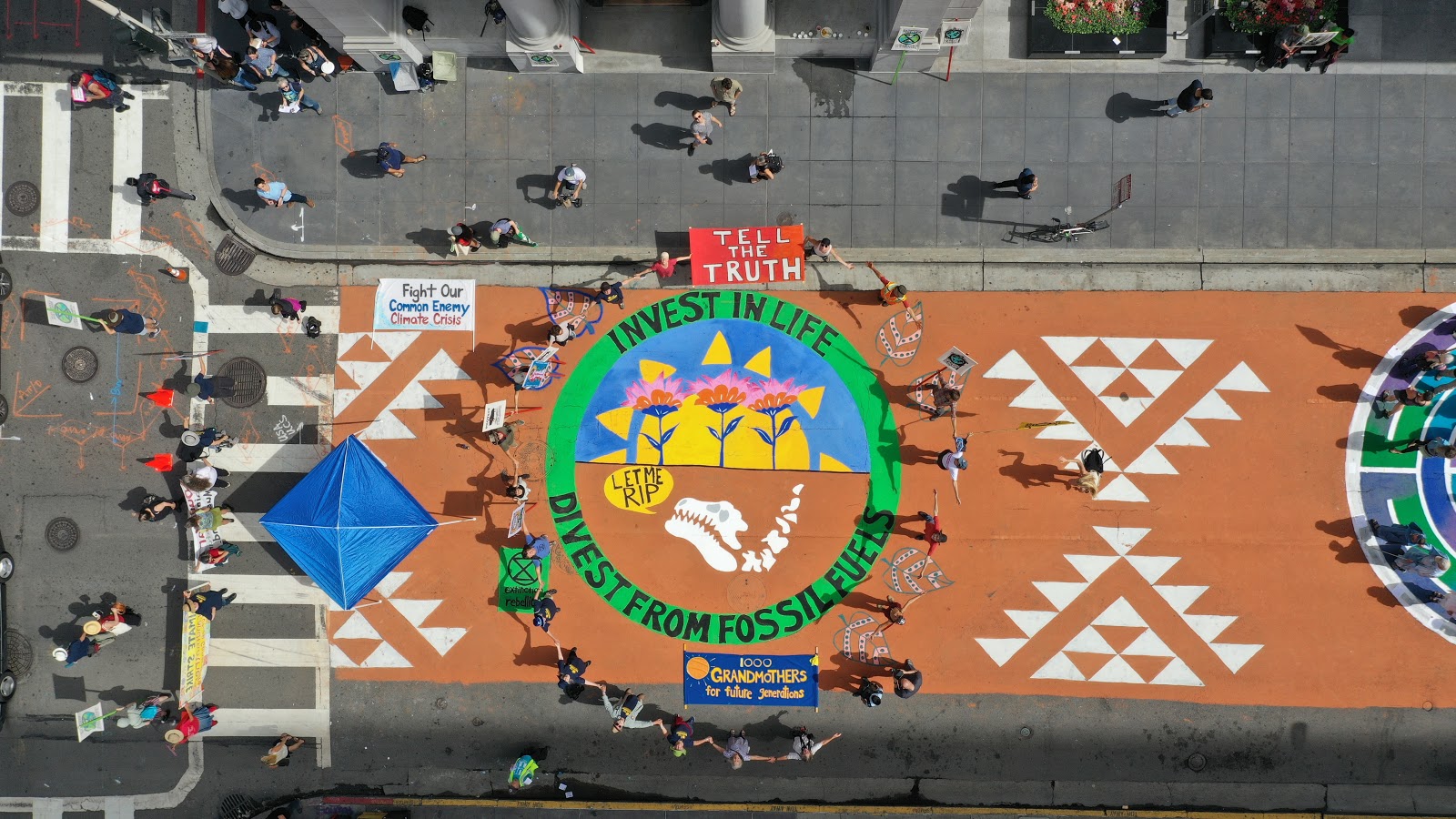 David Solnit is the North American Arts Organizer for 350.org and is the co-author of The Battle of the Story of the Battle of Seattle.