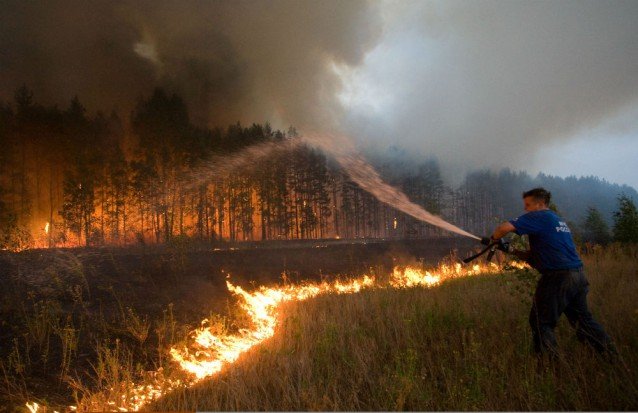 Canada and Russia have lost an alarming number of trees in recent years, compromising the ecologically rich and carbon-sequestering boreal forests that are native to the regions, according to a new report.

The report, published Thursday by the World Resources Institute (WRI), found that the world’s boreal region has shown the steepest decline in forest cover between 2011 and 2013, with Russia — the country home to the world’s largest area of tree cover — losing an average of 16,600 square miles of tree cover every year. That’s an area, the report points out, that’s larger than Switzerland.

Boreal forests serve as major carbon sinks, so losing the forests is bad news for climate change — though, as the report notes, the light-reflecting land that’s left after forests are removed complicates the climate impact a bit.

Most of the tree loss in Canada and Russia can be attributed to forest fires, which the report notes are expected to occur more frequently and become more intense as the climate warms. Nigel Sizer, global director of WRI’s Forests Program, told ThinkProgress that the report didn’t analyze what percentage of the fires that caused the deforestation could be linked to human activity and what percentage couldn’t, but he did say that an increase in fires, including in the northern latitudes, was in line with climate modelling.

He also said that hotter, more intense fires could have an impact on the forests ecologically. Though forests are adapted to deal with — and even thrive after — occasional wildfires, hotter fires could affect the regeneration of trees and could lead to changes in species abundance.

“Much hotter fire is going to kill a lot more of the trees and is going to kill more of the seed stock in the soil as well,” Sizer said. “If you shift the intensity, you end up with different type of forest eventually.”
Some wildfires can be attributed to natural resource development in both Canada and Russia; Because there’s an increased human presence in these areas, Sizer said, the risk of fire also increases. The report also cited logging and insect pests as drivers of the loss of forest cover.

What the report didn’t analyze, however, was the impact of Canadian tar sands development on the region’s forests. But Global Forest Watch data from last year show that more than 20 percent of Canada’s boreal forest region is “now covered by industrial concessions for timber operations, hydrocarbon development, hydroelectric power reservoirs, and mineral extraction.” Vast swaths of Canada’s boreal forests have been cut down for tar sands mining operations, and according to the Sierra Club, none of this land has been “certified as reclaimed” by Alberta, Canada’s government.

The report, which used satellite maps from Google and the University of Maryland, found that globally, the earth’s tree cover loss was slightly lower in 2013 than it was in 2012, but was still 5.2 percent higher than the 2000-2012 average. In total, the earth lost 69,500 square miles of forests in 2013, a chunk about twice the size of Portugal.