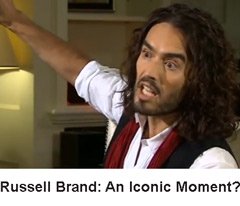 Russel Brand: An Iconic Moment in Politics and Culture?

See a more recent article by Brand on Murdoch’s News of the World: November 29, 2013

Oct 26, 2013–British comedian Russell Brand was interviewed for ten minutes on Oct 23 by Jeremy Paxton on BBC Newsnight. In the interview, Brand rails against what he considers an irredeemably corrupt and doomed capitalist system, including its despoliation of the natural environment. The interview is being quickly considered an iconic moment in politics and culture.

Here is an excerpt from an introductory comment to the interview, by Paul Mason, Cultural and Political Editor at Britain’s Channel Four:

So Russell versus Jeremy was a big cultural event, akin maybe to one of those David Frost interviews in the Profumo era, only in this case it’s the interviewee, not the interviewer, who speaks for the upcoming generation. Because while on my timeline everybody over 40 is saying, effectively, “tee hee, isn’t Brand outrageous”, a lot of people in their twenties are saying simply: Russell is right, bring it on.

From the interview, in the words of Russell Brand:

The interview was prompted by Brand’s guest editorship of the latest issue [Oct. 24] of the prestigious, weekly New Statesman magazine on the theme of ‘revolution. You can view Brand’s lead editorial of that issue here.

‘Revolution’ may be a tired word, but Russell Brand has struck a chord  By Elizabeth Renzetti, Globe and Mail, Oct 26, 2013 If you haven’t seen comedian Russell Brand’s call to revolution, don’t worry – it probably means you’re over 30, which can’t be helped. Before you know it, some wise young person in your sphere will forward it with the subject line “This!”…