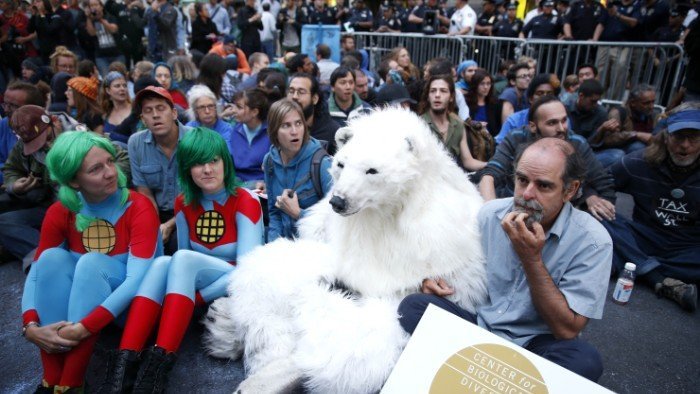 The risk of climate catastrophe is so severe, we had to break the law, say activists

Eleven activists who took part in a peaceful sit-in against climate change in New York City’s Financial District last fall have decided to move their protest into Manhattan’s criminal court, refusing to pay fines for charges of disorderly conduct. The trial begins Monday and the group plans to argue in its defense that Wall Street, through its investments in fossil fuels, is the real harbinger of disorder.

Dubbed “Flood Wall Street” by organizers, several thousand people participated in the direct action on September 22, 2014 that shut down Broadway for eight hours, from its intersection with Wall Street down to Battery Park at the tip of Manhattan. The protest led to the arrest of one hundred and two people.

John Tarleton, editor of the monthly Indypendent newspaper, called the direct action “an exclamation mark” on the People’s Climate March, a demonstration that drew an estimated 400,000 people and was the largest public protest expressing concern for climate change. Tarleton is one of the #Flood11 — an internet hashtag adopted by the activists.

Both gatherings occurred ahead of the UN Climate Summit on September 23rd, in which world leaders, including President Obama, referenced the mass protests. New York Mayor Bill de Blasio, asked by reporters why he had allowed Flood Wall Street demonstrators — who did not possess a permit — to shut down such a large section of the city, said “the First Amendment is a little more important than traffic.”

Going a step further, the #Flood11 contend that the threat of climate change is also more important than traffic.

“In the last year we’ve seen reports from the UN, the White House, the New York City Panel on Climate Change, and from business leaders including former-Mayor Michael Bloomberg warning of climate change,” said Tarleton. “Even though we’re taking an unconventional path to combat the problem, there’s broad concern out there. Where we part ways from the establishment is emphasizing the need to take action immediately and in identifying its underlying source: Wall Street in particular and capitalism more broadly.”

The world’s largest commercial and investment banks have pumped billions into the fossil fuel industry over the years, even as 2014 marked the warmest year on record.

Seven financial institutions, including JPMorgan Chase and CitiGroup, have together put $7 billion towards TransCanada’s Keystone XL pipeline. Though President Obama vetoed last week a Congressional bill which would have approved the project’s final leg, its fate is still up in the air pending a State Department review. The pipeline has long been a central object of concern among environmentalists who argue it will lead to further extraction of tar sands oil at a time when atmospheric concentrations of carbon dioxide have already reached levels not seen on Earth for at least 800,000 years.

“We can’t make incremental changes; we need radical solutions to address this crisis,” #Flood11 member Susan Heitker, who worries what the future holds for her five-year-old son, told VICE News. “I don’t want to prepare my child for the world. I want to prepare the world for my child.”

In the courtroom, the #Flood11 and their attorney Martin Stolar, plan to utilize what is commonly referred to as the “necessity defense” — or in New York penal law, defense of justification, which states that transgressing the law is justified in order to avoid imminent harm.

“The public was and is facing imminent injury and something had to be done,” said Stolar. “It’s not like somebody was holding a gun, but if we don’t do something about climate change now, then we’re screwed.”
…more