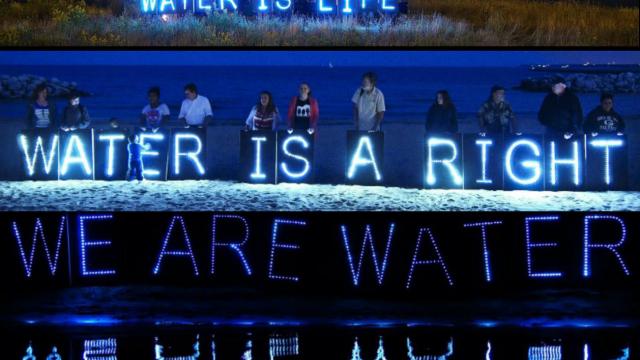 Reversing the tide: cities and countries are rebelling against water privatization and winning

Private companies have been working to make a profit from water since the 1600s, when the first water companies were established in England and Wales. The first wave of water privatization occurred in the 1800s, and by the mid- to late-19th century, privately owned water utilities were common in Europe, the United States and Latin America, and began to appear in Africa and Asia.

But the privatization flurry faded, and throughout much of the 20th century water was largely a publicly controlled resource. In the U.S., for example, just 30% of piped water systems were privately owned in 1924, dropping from 60% in 1850.

It wasn’t until the late 1980s that the idea of private companies managing water re-emerged on a large scale. Under Margaret Thatcher, the U.K. government privatized all water companies in England and Wales in 1989 – making it the first country to do so. Coupled with the global emphasis on free market capitalism after the fall of communism, it began the second wave of water privatization that continues today.

Privatizing water was, and still is, encouraged by the International Monetary Fund and the World Bank, which make public-to-private takeovers a condition of lending. As a result, the early 1990s saw a rush of cities and countries around the world signing over their nations’ water resources to private companies.

It is argued by industry and investors that putting water in private hands translates into improvements in efficiency and service quality, and that services will be better managed. Privatizing also provides governments an opportunity to gain revenue by selling off water services, and for companies to generate profit. But with profit the main objective, the idea of water as a human right arguably becomes a secondary concern.

Problems with water privatization often begin to occur soon after the initial wave of enthusiasm – from lack of infrastructure investment to environmental neglect. A 2005 study by the World Bank said that overall evidence suggests “there is no statistically significant difference between the efficiency performance of public and private operators in this sector.” The most common complaint about water privatization concerned tariff increases, which occur in the vast majority of cases, making safe water inaccessible for many.

Despite these issues, aid agencies, water companies and many governments around the world continue to pursue privatization of water in the name of profit. In 2011, economist Willem Buiter described water as “an asset class that will, in my view, become eventually the single most important physical-commodity-based asset class, dwarfing oil, copper, agricultural commodities and precious metals.”

But opposition to this ideology is mounting. Known as remunicipalization, more and more communities and governments are choosing to resist and reverse private water contracts. According to a 2014 report by the Transnational Institute, around 180 cities in 35 countries have returned control of their water supply to municipalities in the past 15 years.

To highlight this trend, here are some of the most significant examples of resistance to water privatization.

In 1999, the control of water in Cochabamba, Bolivia’s third largest city, was handed over to Aguas del Tunari – a new company and joint venture involving the U.S. engineering company Bechtel Corporation. The deal was orchestrated by the World Bank and the Inter-American Development Bank, which made it a requirement for Bolivia to retain ongoing state loans. Privatization did little in addressing access to water for the city’s residents – but led to a tripling in water’s cost, and is thought to have contributed to an increase in levels of poverty.

As a result, the people of Cochabamba protested on a mass scale. Tens of thousands took to the streets, and in April 2000, the government reversed the privatization and the city’s water was back under state control. Know as the Cochabamba Water War, the case marked a turning point in the anti-water privatization movement. It demonstrated that private contracts could be overcome by grassroots action, and it paved the way for others to follow suit. Although problems of water privatization are often seen as an issue in the developing world, Western nations are increasingly experiencing remunicipalization as well. One of the first cities for this to occur in the early 2000s was Atlanta. When United Water took over the city’s water supply in 1999, it promised 50% savings for the public and double-digit growth for the company. But as soon as the company took over, the workforce was cut in half and water quality declined to such an extent that on some occasions residents were forced to boil their tap water. Meanwhile, tariffs increased year over year.

As a result of public anger, and just four years into a 20-year contract, Atlanta Mayor Shirley Franklin reversed the privatization in 2003. Although more than 20 cities in the U.S. have taken back control of water from private companies since 2002, that process is under threat after President Obama signed the Water Resources Reform and Development Act into law last year, which seeks to expand private financing for water projects. In 2004, Uruguay became the first country to make water privatization illegal by prohibiting the sale and operation of water services to private companies. A referendum was held after two private projects in the country proved unpopular. There was also growing pressure from the IMF for new private contracts tied to loan conditions, and threats arising from free trade investment negotiations with organizations like the World Trade Organization and Free Trade Area of the Americas.

The proposal to make water privatization in Uruguay illegal was supported by more than 62% of voters. It stated that access to piped water and sanitation are fundamental human rights, and that social impact takes priority over economic considerations in water policy. A similar law came into force in the Netherlands that same year. In a 2011 referendum, 27 million Italians voted to repeal a law favoring water privatization in order for their water services to remain public. Despite being one of the first countries to involve private companies in water management, and being home to giant global water companies Veolia and Suez, remunicipalization is surging in France. Since 2005 there have been 41 cases of water being put back into state hands, with more reversals expected in the next few years. After a contract with Suez and Veolia expired in 2010, Paris citizens voted to return their water to public control. Since then, the city’s water supply has been managed by Eau de Paris using a plan of “water solidarity,” which includes discounts for poor households and enables citizens to engage in decisions about water investment and tariffs. In the first year under Eau de Paris, the city saved $46 million and managed to reduce rates for residents. Until recently, Ireland was the only Organisation for Economic Co-operation and Development (OECD) country with water free at the point of use. But in 2014, the government decided to establish a semi-state company, Irish Water, as part of a 2010 bailout deal reached with the European Union and IMF. With the formation of the company came the introduction of water usage chargers, despite the fact that citizens already pay for water through general taxation. As a result, the move became the most unpopular of all the austerity measures introduced in Ireland since 2008.

In May, the country’s environment minister announced an estimated average household cost of €240 ($272) due to the privatization, and said that water would turn to “a trickle” for those who refused to pay. But people resisted and Irish Water collected less than half the charges due for the first quarter of 2015. Citizens loudly protested the threat of water privatization through song and by taking to the streets in the hundreds of thousands nationwide. In August, a poll revealed that the majority of political parties in Ireland are now in favor of holding a referendum on whether water services should be privatized. With a general election due to take place by April 2016, the people of Ireland could become the latest to reject water privatization, spurring other countries to do the same. The Nigerian city, Lagos, hosted a first-of-its-kind water summit in August. The two-day event brought together civil society groups and activists from around the world to look at specific ways of preventing water privatization internationally, and putting forward options for alternatives as companies increasingly put profit before public interest. Lagos was chosen to host the event due to an impending private takeover of the city’s water supply, which is facing ongoing opposition from local people. The summit resulted in the formation of the Africa Coalition Against Water Privatisation, which is working to galvanize a network of civil society and development experts promoting access to water as a human rights issue.