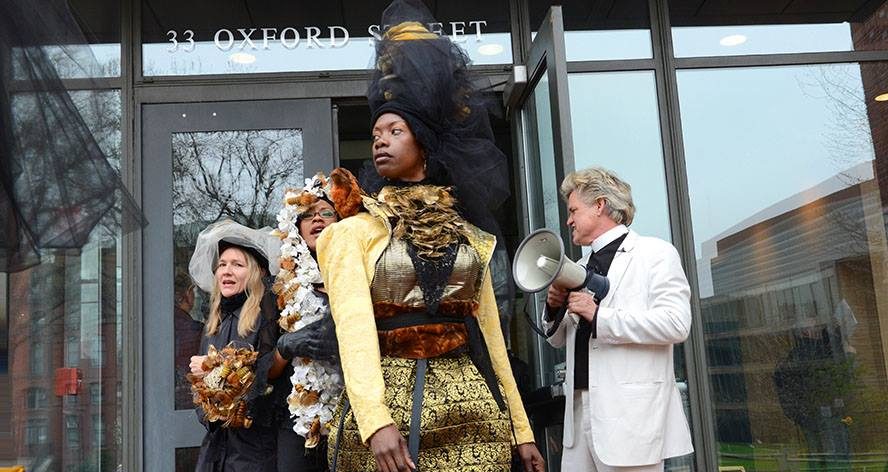 Reverend Billy vs the Robobee

Performance artist Reverend Billy and the Stop Shopping Choir staged an exorcism recently in the Robobee lab at Harvard’s School of Engineering and Applied Science (SEAS), The Choir dressed up as queen bees and sang a song in honor of the threatened Honey Bee. With its capacity for artificial pollination, the Robobee could replace the Honey Bee, which is facing extinction. The lead scientist at Harvard’s Micro-Robotics Lab is a DARPA fellow and it is likely that drone-makers at the Pentagon are looking to use the science the lab develops for surveillance. At a display case full of Robobee prototypes the Stop Shopping Choir left fruits and vegetables; items that are pollinated by the Honey Bee.

The Village Voice has more:

Domestic bees, as well as feral honey bees, have been dying at in shocking numbers over the past 50 years, with an especially sharp acceleration after 2006. Everybody but the United States seems to agree that the bee deaths are likely caused by neonicotinoids, a common class of pesticide, which seem to make it impossible for bees to find their way back to their hives. The European Union has banned them outright, while the U.S. has not. They’re sort of kind of maybe considering it, though, a process which should only take a couple decades, with a ban arriving just in time to save the last remaining bee as it coughs into a bee-sized handkerchief on its tiny deathbed.

Not to worry, though: science is coming to the rescue, not by figuring out how to stop the bees from dying, but by creating new robot bees. Over the past decade, the Harvard Microrobotics Lab created the RoboBee, who’s roughly the size of a penny. It’s one of their many tiny robot projects, all of which are designed to mimic nature; in 2007, the lab created and successfully flew a life-sized robotic fly, the first time such a flight was achieved. In 2012, the RoboBee was able to fly in a controlled way for the first time.

The scientists say that the RoboBees will have a number of practical applications : pollinating crops, search and rescue missions, environmental survey projects after disasters, traffic monitoring, and, of course, military surveillance. It’s that last one that has the U.S. Department of Defense all excited.

Reverend Billy has an ongoing gig at Joe’s Pub in New York City. Tickets are $15 and can be purchased at www.joespub.com or by dialing 212.967.7555.  Discounts are available, too, if you contact Revbilly@revbilly.com.