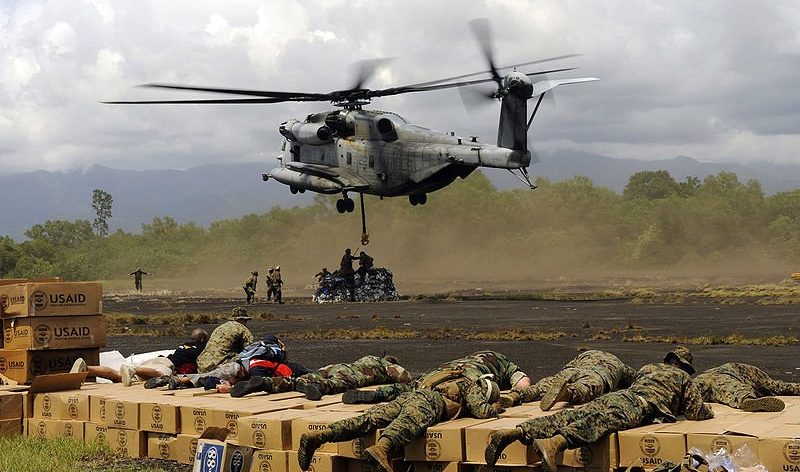 “These reports make it crystal clear. To national security and defense leaders, there’s absolutely nothing political about climate change. It’s a security risk, it makes other security risks worse, and we need to do something big about it.” – Francesco Femia and Caitlin Werrell, Co-Presidents at the Center for Climate and Security

“National security leaders always have to account for risk. As long as there is a risk of climate change, we must account for its potential implications for our military capabilities and respond accordingly.”  – Hon. Dov Zakheim, Former Under Secretary of Defense (Comptroller) under President George W. Bush

At the heart of the statement is a concern about risks to regions of the world of strategic significance to the United States – risks that can contribute to political and financial instability on an international scale, as well as maritime insecurity. As the statement notes: “Stresses resulting from climate change can increase the likelihood of intra or international conflict, state failure, mass migration, and the creation of additional ungoverned spaces, across a range of strategically-significant regions, including but not limited to the Middle East and North Africa, Central Asia, the Indo-Asia-Pacific, and the Arctic regions.”

“Our military and intelligence leadership have recognized under both the George W Bush and the Obama Administrations, that climate change will present real and costly risks to our national security and that the effects are going to get worse if we don’t do something about it very soon. As General Douglas MacArthur warned about the dangers of unpreparedness for war, we don’t want to be too late.” – Geoffrey Kemp, Senior Director for Regional Security, Center for the National lnterest, former Special Assistant to President Reagan for Nat’l Security Affairs

The Climate and Security Advisory Group (CSAG), a bipartisan group of forty-six senior military, national security and foreign policy experts chaired by the Center for Climate and Security and the George Washington University’s Elliott School of International Affairs, released a briefing book calling on the next President and key cabinet members to “comprehensively address the security risks of climate change at all levels of national security planning.”

“The national security community has focused on the intersection of climate risk and security for over a decade. The conclusions are clear: climate risks are accelerating in their likelihood and severity.  The next administration, whomever is elected, has the duty and obligation as Commander in Chief to manage this risk in a comprehensive manner.” – Rear Admiral David Titley, US Navy (ret), Member, The Climate and Security Advisory Group

The group recommendations include: “Assigning a cabinet-level official to lead on domestic climate change and security issues; Establishing senior climate security leadership within the offices of the National Security Advisor and Secretary of Defense; Directing the Secretary of Homeland Security to develop a National Adaptation and Resilience Strategy, and; Prioritizing climate change in intelligence assessments.”

“As our Director of National Intelligence recently stated: ‘in the coming decades, an underlying meta-driver of unpredictable instability will be…climate change.’ That’s why we’re recommending that the next Commander-in-Chief take a comprehensive approach to combating climate change and its impact on U.S. national security, defense and foreign policy interests.” –Hon. Sherri Goodman, Member, The Climate and Security Advisory Group

A Military Expert Panel from the Center for Climate and Security, including senior retired flag officers from each of the Armed Services, issued a report concluding that sea level rise risks to coastal military installations are already being experienced, are likely to increase significantly throughout the century, and present serious risks to military readiness, operations and strategy.

“For the United States to remain strong and ready, we must ensure that our military and federal first responder capabilities can withstand and adapt to sea level rise. There isn’t a region in the world where rising seas don’t affect our military readiness and operations, and complicate our ability to do our job.  For our Coast Guard this is particularly true as they are embedded in the communities they serve and doubly impacted at home and at work.” – Vice Admiral Rob Parker, U.S. Coast Guard (ret), Military Expert Panel Member, the Center for Climate and Security

Fully 1,774 of the U.S. military’s coastal domestic and international military installations face risks from sea level rise and extreme weather. If not sufficiently mitigated, these risks may have wide-ranging effects on the military’s ability to effectively fulfill its mission. The report assesses the effects of sea level rise across military infrastructure domestically and globally, and the implications on the ability to train, mobilize, operate and fulfill strategic objectives.

“The military’s job is to keep Americans safe from immediate and long term threats. In that role, we don’t have the luxury of choosing to wait until all of the data is in… on anything… we have to keep our risk to a manageable level. For us, sea level rise is going to impact some critical military basing, training, and ability to deploy and in some cases even operate.  If the next Commander in Chief wants to prioritize national security, seal level rise has to be in the list of threats.” – General Ronald Keys, U.S. Air Force (ret), Military Expert Panel Member, the Center for Climate and Security

The Military Expert Panel report concludes that policies and plans for addressing climate change risks must go beyond infrastructure resilience, and into the realm of operations and strategy. The authors recommend that policy-makers support comprehensive and preventive measures to address increasing risks from sea level rise. Recommendations include: building capacity to address infrastructural, operational and strategic risks, gaming out catastrophic climate scenarios in planning; tracking trends in climate impacts, and; collaborating with adjacent civilian communities.

The Center for Climate and Security (CCS) is a non-partisan security policy institute with a distinguished Advisory Board of military, national security and foreign policy experts.