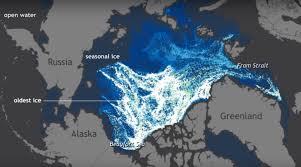 Never before in the history of the human species has climate set so many spine-chilling new records as last year, 2016. That dire assessment comes via analysis of the World Meteorological Organization’s (“WMO”) annual report d/d March 21, 2017, prompting a thought: Does a wildly out of control climate threaten lifestyle and/or life as we know it?

The answer is a resounding yes it does! It’s just a matter of time.

Still, nobody knows for certain, meaning 100%, whether an out of control climate is truly life-threatening or not (it is a new experience, so nobody knows what to expect), but on the other hand, who can possibly know for sure until it is way too late. As for example, nobody knows if and/or when runaway global warming kicks into high gear as the result of massive methane eruptions, the Big Burp, across the Arctic’s shallow East Siberian Sea, which is fast losing its protective icy cap, in turn sizzling agriculture as excessive methane in the atmosphere traps heat, which a small core of scientists believes will happen within a decade, taking temperatures up so high so fast as to sear and blacken the landscape.

As such and in consideration of the all-powerful rightward shift in U.S. politics, which embraces an off-the-wall oddball denial of science, threatening climate/environmental regulation, analysis, and critical funding, it is imperative to expose the upshot of the impending thrashing of public science institutions by this mean-spirited right wing cabal. That upshot is easily identified as an abrupt end to America’s comfy lifestyle metamorphosing into societal riots in the streets, rampant theft, gang warfare labeled as terrorism, and non-premeditated murder, in certain respects similar to Syria today.

Trump has already spotted impending trouble because of an overheated climate. The Middle East is home to 350 million people, more people than the U.S. Trump intends to keep them out of the U.S., as drought has forced massive movement and unrest for years now. The southern Mediterranean coastline and the Middle East are drying up. Look to Europe for the impact. It’s not just Syrians escaping war but middle easterners throughout the region hightailing it out.
“The World Resources Institute (WRI) claims water shortages were a key factor in the 2011 Syria civil war. Drought and water shortages in Syria likely contributed to the unrest that stoked the country’s 2011 civil war. Dwindling water resources and chronic mismanagement forced 1.5 million people, primarily farmers and herders, to lose their livelihoods and leave their land, move to urban areas, and magnify Syria’s general destabilization, says the report” (Source: John Vidal, Middle East Faces Water Shortages for the Next 25 Years, Study Says, The Guardian, August 27, 2015).
Science is nearly 100% unanimous that anthropogenic (human-influenced) climate change is happening, and it is happening with a swagger; it is ugly and a threat to lifestyles and to life in multiple ways, for example, forcing hundreds of thousands of Middle Easterners to migrate to Europe. The leading indicators of impending climatic trouble are found in reams of data that threaten to turn civilization upside down.

Everything that can go wrong with the climate is happening altogether at the same time, including an overheated overtaxed ocean, exerting maximum stress on the ecosystem, prompting the question of the century: Can our trusty life-supporting biosphere hang in there?

Even as the climate signals deepening trouble, the Trump administration is dead set against science, at war with environmental regulations, and remarkably
(really mouth-dropping) oblivious to the status of the biosphere. Regrettably, this calculated ignorance is fact. Just look at Trump appointments of radical right wing nutcases, and they are truly nutcases that believe a pluralistic society doesn’t work. They are the antithesis of pluralism with a feudalistic bent but yet in charge of a multifaceted complex modern government.

Still, they are not stupid, rather smart political operatives that appeal to a right wing mentality that abhors regulation. In point of fact, they, i.e., Trumpeters, are a throw back to America’s frontier spirit as epitomized by Frederick Jackson Turner’s (American historian) “Frontier Thesis” circa 1893, which highlighted “rugged individualism,” as the major mover and shaker of American democracy. For Turner, American democracy was shaped via rejection of highbrow culture (aristocratic stuff), rejection of establishment principles but embracing a brand of violence (six-shooters) unique to survival on the edge of the frontier.

Nowadays however, that frontier is gone, and rugged individualism doesn’t square so well within a pluralistic society already jam-packed with multi-ethnicity. Notably, gun toting white guys no longer fit in like they did in the 1800s, but Trump has given ‘em a new lease on life.

The Trumpeters say “balderdash,” science is a joke and not to be believed, interestingly enough emulating those same 19th century gun-toting white guys, shoot first, questions later. The proof of their Planet Pluto line of thinking is easily found in the administration’s behavior and policies, cut, cut, cut science and critical thinking arenas, whereas if they truly believed the science, spending for NOAA and EPA and NASA would double or triple as panic sets in, fearing climatic Armageddon. After all, the climate is signaling big time trouble down the road with bells, whistles, and red flashing lights warning of impending crises immediately ahead, right around the bend, a surprise attack.

Ad interim, America’s 19th century frontier mentality, which helped to shape democracy in the first place, has come back to overturn democracy and dictate climatic upheaval and destruction with its concomitant sharp turn away from democratic spirits in favor of a return to Gunfight at the O.K. Corral, circa 1881.

Robert Hunziker lives in Los Angeles and can be reached at roberthunziker@icloud.com