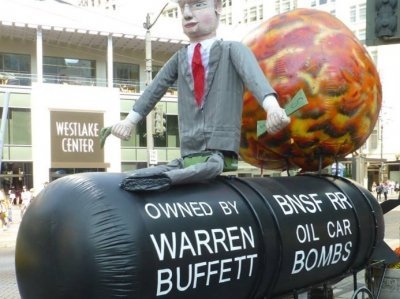 Rail workers and environmentalists to teach each other

With public attention focused on the railroads in a way it hasn’t been for decades, the cross-craft solidarity group Railroad Workers United is seizing the opportunity to teach the general public “railroading 101”—and teach rail workers “environmental politics 101.”

Both those workshops, among others, will be offered at one-day conferences on “The Future of Railroads: Safety, Workers, Community, and Environment,” March 14 in Richmond, California, and March 21 in Olympia, Washington.

“My excitement about the conference is having railroaders, who on a daily basis are moving these really dangerous, volatile, flammable materials, having a dialogue with communities who want it to be made safe,” says activist Gifford Hartman.

“To my knowledge it’s never been done,” says Seattle switchman-conductor Jen Wallis. “Rail labor hasn’t worked with environmentalists to the degree that steelworkers and longshoremen and Teamsters have. It’s all very new.”

RWU is partnering with the Backbone Campaign and other groups to organize both events. The idea is to bring together rank-and-filers, environmentalists, and the general public.

Just as important as learning each other’s issues, Wallis says, is that “we get to know each other… So we have people we can call on when we have an issue on the table, and they can do the same with us.” …more