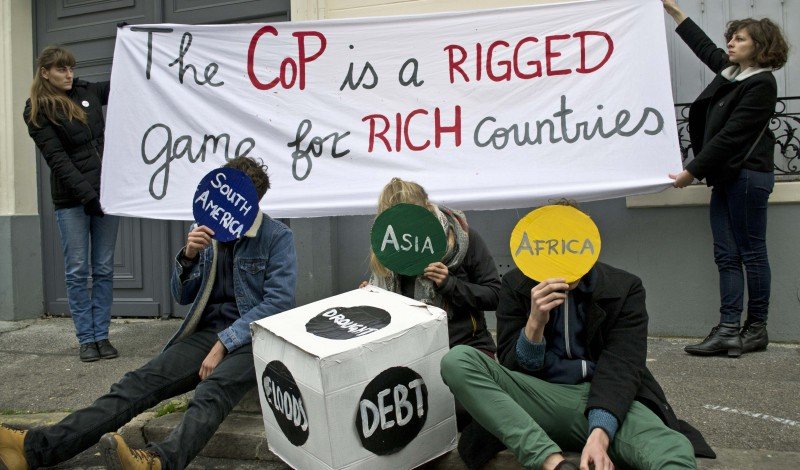 In praise of Trump pulling out of the Paris climate pact

To the dismay of our allies, the White House could any day announce the U.S. will withdraw from the Paris climate agreement. But as a patriot and climate activist, I’m not dismayed. I actually want to pull out.

The value of the Paris Agreement is in its aspirational goal of limiting temperature increase to 1.5 degrees Celsius, not in its implementation mechanisms, which are voluntary, insufficient, and impossible to monitor. But that modest goal will be breached shortly, which makes the agreement a kind of fig leaf, offering political cover to those who would soft-pedal the runaway climate crisis a while longer.

The U.N. Conference of the Parties is certainly not the organization to constrain powerful, retrenched fossil fuel interests and other bad climate actors and rogue climate states. The Paris agreement affords oil, gas and coal companies a globally visible platform through which to peddle influence and appear engaged on climate change while lobbying for business as usual. That won’t save the climate.

At what point do we give up wishful, incremental thinking — that reason will prevail, the free market will adjust, the president’s daughter and son-in-law will dissuade him from the worst climaticide, the Democratic Party will do something, or prior policies which tinker on the margins like the Clean Power Plan won’t be totally obliterated?

I’d argue we’ve reached that point. If Trump withdraws from the Paris Agreement, at least we will have clarity instead of false hope.

Who wanted to keep the U.S. in the Paris agreement anyway? People around the world, a majority of Americans, environmentalists and other coastal elites — constituencies for which Trump has shown indifference and/or contempt. Staying in was also favored by Exxon Mobil, Chevron, BP, Peabody coal, eBay, HP, General Mills, Kellogg, Tesla and other multinationals the Trump administration would have preferred to keep happy. But let’s face it, they won’t be all that mad the U.S. is pulling out, and the political impact won’t be all that great.

Neither will the environmental impact. In fact, since the agreement lacks teeth, breaking it won’t have any effect on the climate in the short term. But in the longer term, the shock and rethinking it will cause in some circles just might precipitate political and cultural changes we need to stave off climate cataclysm.

Pulling out of Paris will also give the president a political boost. It gives Breitbart and Fox something to crow about and The New York Times, Washington Post and CNN something that’s not Russia-gate to fret over.

Don’t get me wrong. I’m not trying to justify or abet Trump and his supporters in climate denial, and I’m not thinking climate activists and the Trump administration will end up in some the kind of strange-bedfellows embrace. Personally, I loathe this administration and find the president’s actions mean, maleficent, and mendacious, though it’s nothing personal. On my very best days I can eke out a couple minutes of meta loving-kindness meditation for the president as a person, but it’s a struggle.

I welcome pulling out of the Paris agreement because it will disrupt our complacency and strengthen the most vigorous avenues of climate action left to us, which are through the courts and direct citizen action. It lends much more credence to the Our Children’s Trust legal argument  that the federal government has utterly failed in its responsibility to consider the long-term impact of carbon emissions. It advances the arguments of the Community Environmental Legal Defense Fund in their federal lawsuit for the right to a livable climate. And it strengthens the case for climate activists attempting to raise the “necessity defense” as a justification for citizen climate action, as I and my fellow “valve turners” are doing as we face criminal charges for shutting off emergency valves on oil sands pipelines.

It’s also true that withdrawal from Paris deprives mainstream environmental organizations and the foundations and funders that guide them of a key deliverable, and that could risk eroding support for them. Perhaps that’s not such a bad thing. Many of them have pursued an utterly bankrupt strategy of understating the climate problem, negotiating with the fossil fuel industry, and cherry-picking small victories to showcase organizational accomplishments at the expense of a functional movement strategy.

Pulling out of Paris takes false hopes off the table, and opens the way for building an effective climate movement. So as committed climate activist who knows we’re running out of time, I say, let’s get on with it.

Ken Ward is a former deputy director of Greenpeace going on trial next week on felony charges for shutting down an oil sands pipeline to prevent harm to the climate.