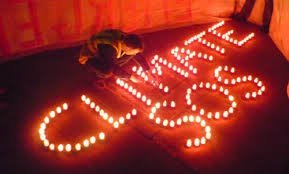 The earth is on fire. If that statement sounds alarmist, it’s because you should be alarmed. Each month seems to bring new and more frightening proof of the effects of man-made climate change. But a new generation of activists is equipping itself with the cold, hard facts – and confronting the corporate arsonists who set the blaze. In late October, researchers from the University of Colorado released a study showing that average summer temperatures in the Eastern Canadian Arctic have been higher in the last 100 years than during any century in the past 44,000 years – and possibly 120,000 years. “The key piece here is just how unprecedented the warming of Arctic Canada is,” said lead author Professor Gifford Miller. “This study really says the warming we are seeing is outside any kind of known natural variability, and it has to be due to increased greenhouse gases in the atmosphere.”