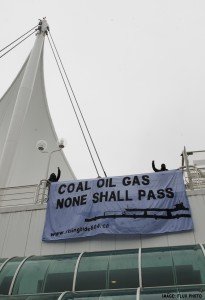 VANCOUVER, COAST SALISH TERRITORIES – This morning, activists with Rising Tide-Vancouver, Coast Salish Territories dropped a banner reading “Coal, Oil, Gas: None Shall Pass” outside Port Metro Vancouver’s head office at Canada Place, in opposition to the proposed Fraser Surrey Docks coal terminal. “This coal export project is part of a push to make BC a gateway to profits for the fossil fuel industry. While a coal terminal may be on the radar now, we are facing a juggernaut of fossil fuel development that puts our climate, water and health at risk for the sake of corporate profit – and Christy Clark and Stephen Harper are acting as the industry’s top salespeople,” said Chandra Tung of Rising Tide.