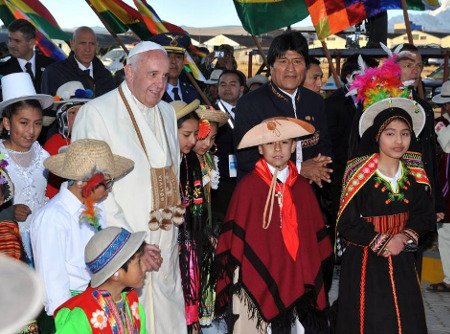 The Pope’s Message in Bolivia and to the World: Report by a Canadian participant

In retrospect, it must be said that the College of Cardinals made an astute decision in 2013 when they chose Jorge Mario Bergoglio of Argentina as the Vicar of Christ. Pope Francis, as he is now called, has emerged as a world leader in speaking out on the major social and humanitarian issues ranging from climate crisis to poverty and social exclusion. Francis, the first Pope from the Western Hemisphere, is especially popular in Latin America, where the Church of Rome is contending with burgeoning evangelical sects and emerging secular movements around such issues as abortion and gay rights.

Early on in his papacy, Francis indicated his close affinity with President Evo Morales and the “Process of Change” that Morales and the Movement Toward Socialism (MAS) are spearheading in Bolivia. When the initial World Meeting of Popular Movements was held at the Vatican in October 2014, Morales was the only elected head of state who attended.

In December, following the failure of the United Nations COP20 climate talks in Lima to take meaningful actions to prevent catastrophic climate warming, Morales urged the environment ministers of the ALBA countries to organize a “world encounter of social movements” in 2015 that would develop “a proposal to save life and humanity.”[1]

It seems that the Pope’s scheduled visit in July to Ecuador, Bolivia and Paraguay – three relatively peripheral nations with large Indigenous populations – became the occasion for this encounter. The Bolivian government and its supporting popular movements collaborated with the Vatican and the social movement organizers of the First World Meeting to organize a Second World Meeting, this time in the Bolivian city of Santa Cruz de la Sierra. Held July 7-9, it drew 1500 participants. It coincided with the Pope’s 48-hour visit to Bolivia, and was the major event of both his visit and the meeting of the popular movements.

The Pope’s closing speech at the Santa Cruz assembly, a powerful statement of identification with the major objectives of the social agenda being pursued, unevenly, by the social movements and a few progressive governments of Latin America, continues to be cited and debated in the Bolivian media.

Among the 1500 participants at the Santa Cruz meeting gathering were two Canadian women: Susana Deranger, an Indigenous environmental activist from Regina, and Judith Marshall of Toronto, recently retired after two decades working on global labour exchange through the Steelworkers Humanity Fund. Judith contributes the following guest column reporting on their experiences in Santa Cruz and analyzing with insight the ways in which Pope Francis is helping to advance a progressive global agenda among broad circles seldom reached by the traditional left.[2] •

Richard Fidler is an Ottawa member of the Socialist Project. Both these articles first appeared on his blog Life on the Left.

Pope Francis and the Protagonism
of the Excluded

Since his election in 2013, Pope Francis has arguably become the most articulate and critical leader of today’s global institutions. He is fearlessly and forthrightly tackling the urgent questions of our times.

His much-anticipated Papal Encyclical on climate change, Laudato Sí, does not disappoint. He tackles the “structurally perverse economic system” that creates a world of obscene rich-poor disparities. He makes a damning critique of a global economic system in which power and wealth are concentrated in the hands of the few while the many struggle for basic needs. He calls attention to how the poor and excluded have become, in effect, the discards from the game plans of the rich.

Pope Francis is forthright about how the global economic system and the throw-away culture it has spawned are destroying not only the lives of the poor but also the planet itself, turning the earth into “an immense pile of filth.”

Pope Francis is now well-known for speaking out on global issues – Syrian war refugees, hunger, migration of Africans to Europe, austerity politics, Cuba. Less well-known are his organizational initiatives, many carried out jointly with the Pontifical Council for Justice and Peace, headed by Cardinal Peter Turkson. Reaching out organizationally to the poor and excluded is one of the most striking initiatives.

In 2013, the leaders in the Landless People’s Movement (MST) in Brazil began to hear signals that Pope Francis was interested in building working links with popular movements.[3] As Bishop Bergoglio in Buenos Aires, Francis had been a constant figure among poverty activists, building strong ties with precarious workers and the solidarity economy.

Argentine activists like Juan Grabois, a lawyer based in the University of Buenos Aires who is on the coordinating committee of the Confederation of Popular Economy Workers, are long-time collaborators with Pope Francis. Grabois and other popular movement leaders like Joao Pedro Stedile from the MST were invited to the Vatican for consultations.

An initial seminar was organized at the Pontifical Academy of Sciences in Rome in December 2013 to focus on global inequalities as experienced and understood by the excluded themselves. Plans were made for a larger gathering.

The First World Meeting of Popular Movements with more than 150 participants took place in Rome in October 2014. Grabois and Stedile, working with Via Campesina, became the co-organizers. They identified more than 100 activists around the world working on three key issues – land, housing and work. These activists from amongst the poor and excluded were invited to come to Rome to be heard and seen. They brought with them a broad plurality of religious beliefs, ethnic origins, gender, age and sexual orientations. The church co-organizers did not vet the activists list. Their own list included thirty bishops known for accompanying and support to struggles of the poor. A dozen representatives of labour and rights organizations vetted by the activists were also invited, myself included.

Undoubtedly the most striking memory of the first meeting was the day when our motley crew invaded St. Peter’s Basilica. Meeting with us in the Old Synod Hall, Pope Francis thanked the participants, acknowledging them as men and women who actually suffered poverty and exclusion in the flesh. He told them that their presence in Rome had huge importance. The fact that the poor existed was known by all. The fact that the poor were on their feet, organized, active, planning, inventing, and resisting – this was what was new and made visible for all to see by their presence.

He focussed on the fact that the poor were not waiting with arms crossed for either NGOs or governments to solve their problems. Their protagonism was strong and creative. While some of it was simply to survive, in many cases, the survival strategies had in them the seeds of new ways of living on the planet, with greater social solidarity and more care of the earth.