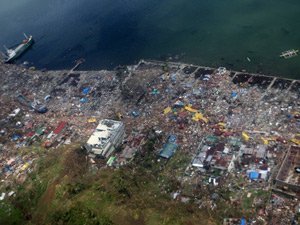 An almost complete breakdown of law and order in Tacloban city, where Typhoon Haiyan caused devastating damage after it struck the Philippines on Friday, is being seen as an ominous sign of what may soon follow in other regions. The total death toll from what is thought to have been the most violent storm ever to strike land is expected to rise well above 10,000 – the number estimated to have been killed in one island alone. Three days after Haiyan roared across a huge swathe of the central Philippines, there is still no word from tens of thousands of people living on the islands that bore the full brunt of the typhoon’s fury.