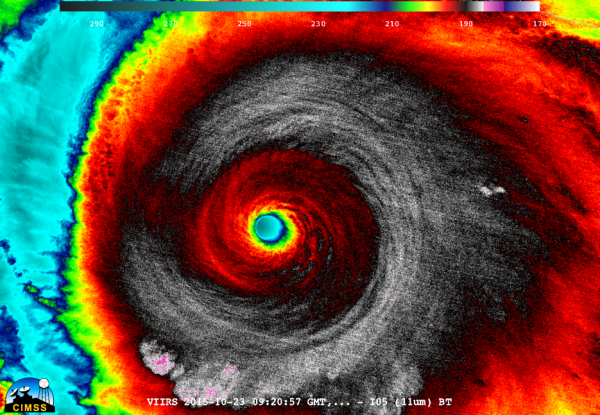 Now this is scary. A tragic development you’d tend to see in a disaster movie screenplay and not in any typical meteorological record for any 36 hour period. But here we have it.

Patricia, as of 36 hours ago, was a rather mild tropical storm churning through the human hothouse and El Nino warmed Eastern Pacific. The storm was predicted to make landfall in Western Mexico as a hurricane, then turn north into Texas, Louisiana and Mississippi — dumping extreme rains over a drought stricken region. But there was little hint as to what would happen next.

Favorable atmospheric conditions and next to zero wind shear set the stage for strengthening. But the main driver was the hot ocean water which Patricia could tap as fuel for rapid intensification. For the entire region now features ocean surface temperatures in the range of 30 to 31 C (86 to 88 F) or about 2-3 degrees Celsius above average. It’s heat fed by an El Nino that could be one

of the top three strongest on record. Heat further intensified by a human forced warming of the globe that has now hit about 1 C above 1880s levels. Heat that would allow Patricia to hit never before seen heights of storm force in a period of extraordinarily rapid intensification.

They call it bombification for a reason. Pressures drop rapidly, wind speeds rage to epic force, and the storm presents a tell-tale angry red signature in the infrared satellite shot. During recent years, bombification has become an all-too-common word associated with ocean storms that are now feeding on unprecedented amounts of heat, moisture, and temperature differentials. Some have even claimed that Hansen’s terrifying ‘Storms of My Grandchildren’ are starting to arrive early. But what happened with Patricia was even outside the new abnormal bombification ‘norm.’

Though weather models did forecast a rapid strengthening for Patricia, the kind of strengthening we ended up with was something freakish, historic and extraordinary. In a 36 hour period pressures plunged from a mild 990s mb storm to a system featuring an 880 mb minimum central pressure. This raging period of ocean-shattering intensification propelled Patricia to a dubious status of most intense storm ever recorded for the Western Hemisphere over centuries of barometric readings. Winds also rapidly strengthened — roaring up from 40 miles per hour to a current top intensity of 200 miles per hour. That’s 160 mph of wind intensification in a little more than 36 hours.

According to meteorologist Phil Klotzbach of Colorado State University in USA Today:

Patricia’s winds intensified a whopping 109 mph during Thursday, rising from a tropical storm to a Category 4 hurricane. It was the fastest intensification ever recorded in the eastern Pacific Ocean, according to meteorologist Phil Klotzbach of Colorado State University (emphasis added).

It was a never-before-seen pace of intensification. One that begs the question — how can we prepare for major storms if bombification starts to occur more rapidly than we can respond?

At current intensity, the storm is now comparable to the monster western Pacific Storms — Haiyan (195 mph and 895 mb) and Tip (195 mph and 870 mb) — otherwise known as the strongest storms ever recorded. And all this fury now aimed at a well-populated swath from the Pacific Coast of Mexico through to the Gulf Coast of the United States.

The potential for tragedy in this situation cannot be understated. A similar strength Hurricane Haiyan — also fueled by abnormally hot waters made hotter by human-forced warming — rendered tens of thousands homeless even as it resulted in the horrible loss of 6,300 souls.

Patricia falls into this high-danger category for a few reasons. The first is that the storm is expected to maintain its extreme Category 5 intensity all the way through to landfall — which is predicted to occur within the next 10-12 hours. Abnormally intense ocean heat content along the path of Patricia, as seen in the graphic below, will continue to provide the powerful storm with fuel as it encroaches upon the Mexico Coast.