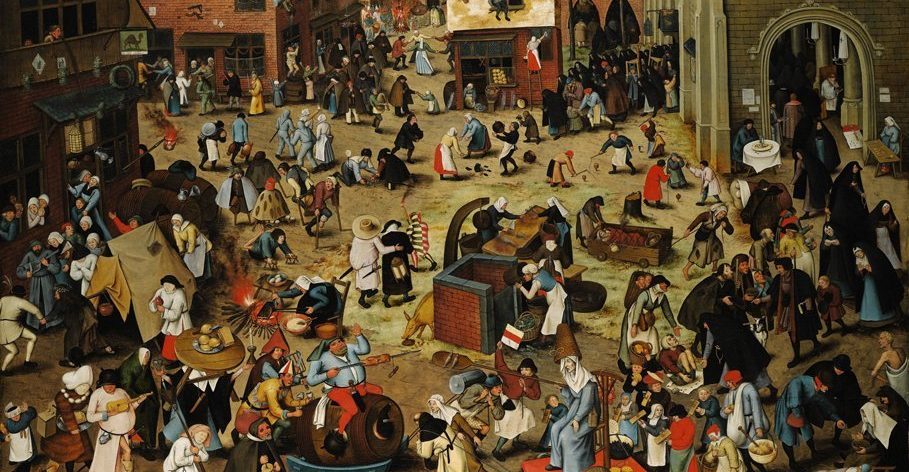 Party against the pipelines: Carnival and rising tide

“If the world is upside down the way it is now, wouldn’t we need to turn it over to get it ‎to stand up straight?” – Eduardo Galeano

On September 27, a local group, Rising Tide – Vancouver, Coast Salish Territories, is orchestrating a street party at an as yet undisclosed location and inviting Vancouver citizens to participate. A prominent theme is the carnivalesque, which is a change of course for a group committed to anti-colonialism, anti-capitalism and direct action in the face of ecological crisis. The event will mysteriously involve the occupation of a space that will remain secret until just before the party is announced while building the suspense and anticipation, and creating an impressive social media presence. To understand the intentions behind this turn, a short literary reference for some background:

Seeking a casual diversion, the protagonist in the story of Dostoesky’s ‘Bobok’ finds himself wandering amongst cemetery stones at a funeral. He unexpectedly overhears conversations of the recently dead and buried, and discovers that not only do exchanges of human consciousness continue for some time after the death of the physical body, lasting until the moment before complete decomposition, but they continue to correspond to the frivolous speech genres of the living, at the surface. Listening intently, he realises that the already dead, while not entirely oblivious to their awkward corporeal state, are incapable of coming to terms with their dire predicament and continue to represent themselves to each other within conventional language and formal social etiquette.

Between initial withdrawal from society and complete surrender to nature, they exist in an ambivalent threshold state, the liminal zone between two deaths, excluded from both the world of the living and the vitality at the edge of existence. As the inertia of familiar conversation from surface being is infected by decay, previous barriers to personal idiosyncratic expression surrender to a place of ‘shameless truthfulness’ where one can ‘really bare one’s soul’ without normative constraint. An inviting infectiousness is in the air, leading to a party-like atmosphere of delicious indiscretions and improprieties. A rather macabre picture emerges in Dostoesky’s story of half-decomposed humans, living-it-up as if death has no sway.

As decomposition spreads, formal and detoured (mis)intentions behind social discourse are rudely interrupted by the increasingly vivid expression of authentic social intercourse. The language games which prolonged the absurdity of surface existence are met with ultimate questions anchored in material existence; the provisionally dead are forced to philosophize the true meaning of life. In the process, they emerge from a deep ambivalence and careless circular slippage of meaning towards unfettered individual expressions of raw truth. The story climaxes with an incomprehensible utterance of ‘Bobok,’ that bursts from the untranslatable private language of a poor soul buried in the cemetery at the last stages of decomposition, a purely emancipatory release gloriously untethered to logos.

Weighty stuff this talk of death and emancipation in Dostoesky — but also life-affirming in the context of political action. An older generation cannot imagine what it is like to be born in an era where any thought of one’s future is over-shadowed by the threat of global ecocide — the death of the planet. Our conventional “way of life,” is about to become threatened, as Roy Scranton argues, by the imminent collapse of the agricultural, shipping and energy networks that are the foundation of our global economy and privileged (for many of us) Vancouver lifestyle. A large-scale die-off of the biosphere is already well underway and the implications of studies from the World Bank, Price Waterhouse Coopers and the International Energy Agency imply that near term human extinction is a real possibility. We are rapidly entering a world of abrupt climate change, where amplified positive feedbacks are already pushing past climate thresholds, causing global strife and promising continued massive upheavals in those lives that still seem relatively comfortable and unaffected.

For those that are alive to this understanding, “radical” solutions are gaining cache amongst environmental activists who desperately want to match their activities in a commensurate way with the scale and depth of the problem. People are searching for meaning — and vehicles to deliver them past numbing and immobilizing Pollyanna mixed with Sisyphean activism. The notion of “carnivalesque” is an attempt at radical departure from this debilitating personal state of affairs. It embodies a communal experience of deep transgression of internalized societal norms, toward a will to “freedom, frankness and familiarity” that allows people to break free, at least temporarily, from those strictures.

Party as revolutionary provocation to official culture’s fixation with technologies of death, is one attempt at life-affirming push-back. “As we resist the onslaught of tar sands pipelines, fracked gas plants and pipelines, and new coal exports,” says Mathew a Rising Tide organizer, “we must also build community, alternatives to the systems of capitalism and colonialism which underpin these devastating projects.” “The carnival,” he says, “will be protest, occupation, celebration, and more, and — like history — will be made by those who show up.” Connecting politics with party transcends rave culture’s lifestyle anarchism or privileged middle-class social safety valve.

Carnival contains a mystery. It is a party, but it is more like the ideal type, the form of “party” from which all parties originate. It is the romantic sense of a pre-capitalist, feudal life where conventional social norms, divisions, hierarchies and prohibitions are temporarily suspended and radical egalitarianism and connectedness momentarily flourish and remind one of how life is supposed to be. Partiers are not actors playing a role in a performance of formalized measured irreverence to society’s proscribed norms for the sake of an audience. This is not formalized modern culture’s version of carnival in the form of “parade.” Nay, this is not spectacle or opportunism. The party is meant to be an all enveloping moment for participants for its own sake.

Our scientists are telling us the planet is hurling towards self-destruction with abrupt and catastrophic changes increasingly happening today to our frankenweather. Meanwhile Mr. Kinder and Mr. Morgan, two men who recently exploited but then escaped the Enron debacle, are clear-cutting trees in our backyard (“the people’s parks,” damn it!) in Burnaby, to scope out building yet another pipeline to spill more carbon into our harbour and the atmosphere. The majority of citizens complacently go about their daily routines, oblivious to the epic tragedy of private capricious power running roughshod over communal values.

Life is a bizarre and macabre satire full of absolute absurdity. When we allow themselves to draw attention to the contradictions, then zoom in closer… and closer… to the perception of this deformed reality, we enter into a mindset alert to the grotesque. We awaken to the real exaggerated proportions of what’s in front of us, our real lives in relation to our unexamined lives. We flee from our staid, boring stupor that allows us to mechanically function as a cog in a wheel, to see the malicious misappropriation of reality on the part of the private corporate fossil fuel interests, the provincial B.C. Liberals and federal Conservatives. We allow ourselves to imagine our boy-scout Prime Minister as the mishapen ghoul he really is, utterly obeisant to the call of global corporate agendas.

The exaggeration of the carnivalesque, the flagrant unleashing of passions and inhibitions allow minds to wander, to feel the weight of contradiction, to follow the kernel of unsettling awareness towards the full embrace of absurdity, and towards a change of being-in-the-world. Experiments with confrontation with the real world, not the story-book or Hollywood version, promise an incongruous, disquieting and disorienting journey. But importantly, they end with a new precision, a street-level intelligence and shrewdness that will guide a new type of politics.

The carnivalesque is rightly a dream world inhabited in REM sleep that fortifies one’s foundation in the waking world. The modernity and instrumental rationality to which people awaken, must then be fought with decidedly self-conscious tools, based in practical tactics and strategy. Those tactics and strategy are deciphered through political economy analysis that diagnose the balance of powers with reference to a more enlightened clarity of their actual, their real proportions and perspectives. That is the time to get down to business and learn how to live in the anthropocene — who are the agents of social change and why, how will they maneuver against capital, what are the rallying themes under which they coalesce?

Present society is a place where dominant power is based on class. The struggle against the giant unscrupulous, profit-seeking corporations that are killing the planet is a class struggle against the idea of property itself. The root of the material and spiritual systems that have led to such grotesquely skewed priorities and relationships that we call “Harperism” or “neoliberalism,” is property: the idea that some people can “own” things and wield their power over others who don’t. To fight the class struggle, we need the kind of visceral experience of reawakened communal values implicit in the unique efforts inspired by the young people within Rising Tide – Vancouver, Coast Salish Territories.

And what of Bobok?

“How can we be prepared for a political event,” asks Alain Badiou. After the REM sleep, what is the name of the ideal towards to which we must coalesce? Communism? Anarchism? Ecosocialism? Or perhaps the more limited: democracy, liberty, equality? Can we come to a collective understanding of that ideal before the forces of capitalism and nature disinterestedly undermine the pursuit? Can we agree on a collective path to fight the forces of destruction in time? In Bobok, we are not privy to the literal translation of the word that has sufficient symbolic density and emancipatory force to propel a departing soul into the next world. As a finale, a split-second summary declaration choreographed by one individual’s entire life experience, the secret of Bobok is unfathomably lost to the rest of us. Perhaps the best we can do for now is to hurry up and die to the old world before the second death has the last word. See you at the party.