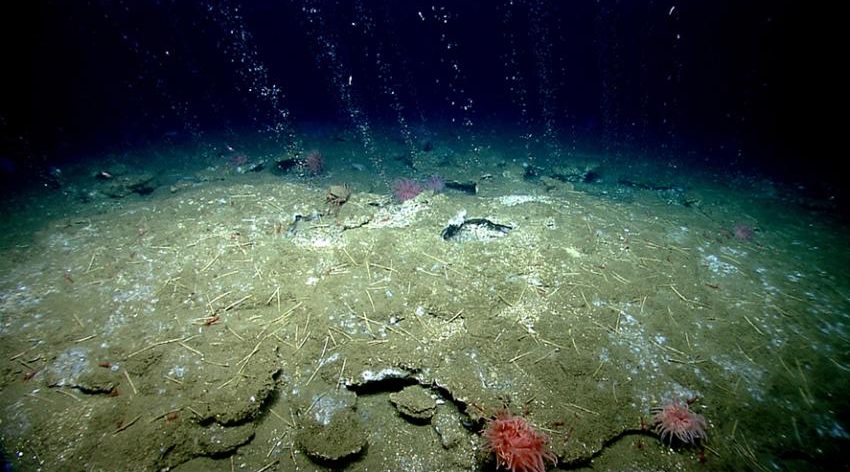 A small team of researchers in the U.S. has discovered the presence of 570 bubble plumes along the Atlantic coast of the U.S. between North Carolina and Massachusetts—the plumes are believed to be methane seeps. In their paper published in the journal Nature Geoscience, the team describes their study of the seafloor and what the discovery of the plumes may mean for global warming.

The bubble plumes showed up on sonar scans conducted by the team over several outings during the period 2011 to 2013. Upon their discovery, the team took a closer look at several of the plume sources—some were surrounded by carbonate rock, which would have taken thousands of years to build up, indicting the plumes have been emitting gas for roughly the same length of time. Other plume sources, on the other hand, were not surrounded by such buildups and were located in more shallow areas, indicating they began emitting gas much more recently. It’s this second type that is of concern. They researchers believe it’s possible that a warmer ocean has caused crystallized hydrates to melt, releasing the methane they hold. That of course suggests that the bubbles themselves are filled with methane—a greenhouse gas.

Methane is known to have been trapped on the seafloor off the east coast of the U.S. after the most recent ice age due to lower sea levels exposing the sea floor. Scientists believe during that last ice age, the area was covered by wetlands, which of course are known to produce methane as plants die. As the ice melted, and seawater covered the area, the methane became trapped by crystallized hydrates because of the chilly temperatures. As the ocean warms, that process is reversed, allowing methane to escape, seeping out as bubbles in a plume. Most of those bubble don’t make it to the surface of course, they dissolve into the seawater that surrounds them—but that process leads to more carbon dioxide in the water, making it more acidic, which can kill animal and plant life.