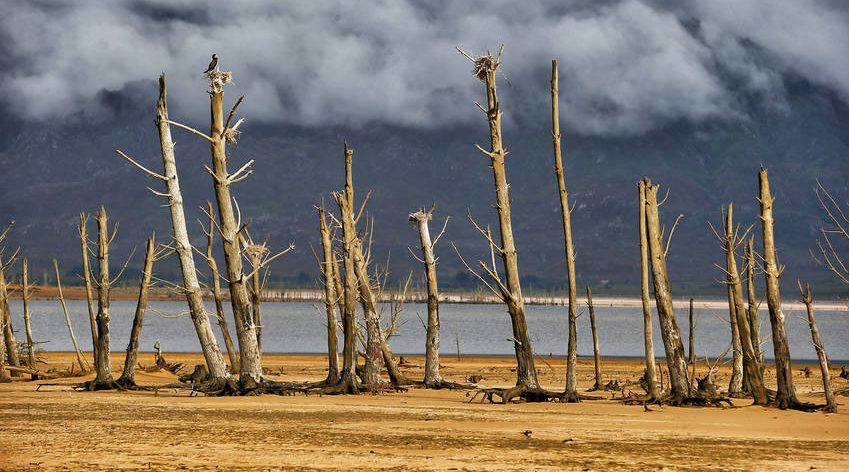 Op-Ed: A call to arms – the climate change crisis amidst mass unemployment

A new 64-page report – One Million Climate Jobs: Moving South Africa forward towards a low-carbon, wage-led, and sustainable path – by the Alternative Information & Development Centre (AIDC) provides the detail, with extensive research citations, showing how this can be done and financed.  The focus is on South Africa, but the remedies are broadly replicable across the globe.

The whole world is full of voices saying there is a stark choice between jobs and action on climate. In South Africa, they tell us to choose between jobs for coal miners and saving the planet.

The either/or choice is misconceived. There are many immediately available alternatives – with (insufficiently recognised) sources of finance available.

Drought, heat and storms kill – and will increasingly kill –crops. In the economic system we live in, that means famines.

Rising sea levels and terrible storms flood and ruin – and will increasingly flood and ruin – many of the world’s cities. The recent floods in Johannesburg and Durban and the havoc in Durban Harbour are timely harbingers.

Climate change means – and will increasingly mean – economic suffering. The governments who have done nothing about the climate for so long will say we must all sacrifice together to save the Earth. We will sacrifice. The elite will not.

Climate change means – and will increasingly mean – hundreds of millions of refugees globally, as they flee droughts, famines, floods and wars. They will increasingly drown in the seas, or walk to borders defended by machine guns.

Climate change means – and will increasingly mean – war. In Sudan and Kenya, we have seen poor people killing each other for water and grass for their animals. That is only a beginning.

Many rural people in South Africa are already on the front lines of climate change.

The recent drought in many parts of the country killed animals and crops; in the Western Cape, the killing continues. This is climate change. Conditions might get better but in the long term, they will get much worse.

But it is not just drought. Temperature increases, on their own, reduce crop yields and pasture grass.

This is climate change. Some people do not want to say this to farmers. But farmers and poor people deserve the truth. They have been lied to, and their livelihoods are being taken away. They have every right to be very angry.

Action by rural people is required to force government to give them what they deserve.

Monthly government grants – like those paid to pensioners and the disabled – are the first of their needs.

Everywhere, there is the need for jobs. Private companies and the market have created unemployment. A publicly-driven attack on climate change can create a million climate jobs.

We need to cut emissions from burning coal, oil and gas by 90%. Instead of cutting back on production and consumption – the standard expectations – we can stop burning coal and gas. We can make almost all our electricity from wind and solar power.

We can provide buses and cars that are comfortable, fast, reliable and cheap. While taking many cars off the roads, we can run cars, buses and trains on renewable electricity, not oil.

We can insulate houses so they lose less energy. We can heat homes with solar energy. We can build millions of new public houses that are heated and cooled with renewable electricity.

We can transform industry and agriculture to use less energy.

And, to do all this, will create at least a million jobs.

With those jobs, research shows we can cut South Africa’s climate changing emissions by at least 75% in 20 years.

And those jobs could be in South Africa. The wind turbines, solar cells and electric vehicles could be made in factories here.

Sometimes, when people talk about renewable energy, they just mean wind farms. But most of the jobs in renewable energy are in making the equipment, not in maintenance. These are factory jobs. They are needed here.

The money is available

We estimate that one million decent jobs will cost the government R346-billion every year. But the government will get two-thirds of that money back. Some of the money will go to producing renewable energy for electricity. Companies and people will pay for that electricity. That will raise about R149-billion a year. Some of the money will go for public transport, and people will buy tickets. We will raise about R67 billion a year. And people who did not have a job will be making money. We estimate the government will get back about R85 billion in taxes.

That leaves R112-billion a year for the government still to find. That’s a lot of money. But there are many ways they can find it: increased company taxation, taxing high incomes, taxing bond sales, closing tax haven loopholes and prescribing assets.  Changes to the Unemployment Insurance Fund, pension funds and eliminating corruption are still further options.

Why should South Africans do this alone? We didn’t make this problem. Why not wait for the rest of the world to act?

One answer is that there are campaigns and unions in many other countries fighting for climate jobs.

The bigger answer is that there are two possible climate futures for South Africa. In one future, at least a million people leave the countryside for the cities, food production falls, and the country has trouble feeding itself. A crisis in minerals production and export will mean that there are fewer jobs in the cities. Much larger numbers of people come south from climate devastation affecting the more rural countries to the north. Some of these climate and economic refugees will be stopped at the border, shot or deported. There will be even worse competition for jobs than there is now. Racism against fellow Africans is already common enough. It will grow much stronger. War and famine will become common in the countries to the North.

There is another possible future. In that future, retrenched workers are either provided with government jobs or grants and subsistence farmers in South Africa receive grants to replace the crops and animals they lose to climate change. The latter example spreads across Africa, and millions of rural Africans can stay alive, and at home.

But the South African example will go further than that. When most of us took on apartheid and won, the whole world saw. If we win a million climate jobs, workers and ordinary people all over the world will see us on their television screens, and come to visit and learn. They will understand that there is a way of dealing with climate change, and with austerity.

It is not a matter of South Africans doing it alone. It is a matter of us leading the world. Winning climate jobs for all Africa, for all humanity, and for the Earth we share. DM

Hard copies of the report are available from Clara@aidc.org.za

Jonathan Neale is an Alternative Information and Development Centre research-associate based in London. He is an author, playwright and climate change activist. He has spent the last 10 years mainly organising global climate demonstrations and working with climate jobs campaigns in several countries.