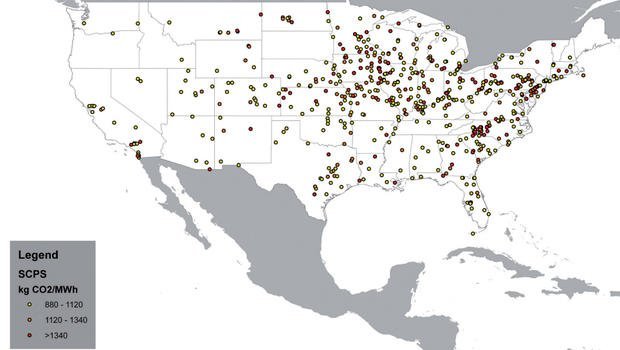 One-fifth of world’s worst coal plants are in U.S.

Data from a March report on coal energy production revealed some dirty truths about the state of coal in America.

Coal provides 40 percent of the world’s electricity and of that, three quarters comes from inefficient and often aging power stations that require more fuel and water to generate the same amount of electricity as newer, better plants. Compared with the most modern stations, these so-called “subcritical” coal-fired power stations (SCPS) emit 75 percent more carbon pollution and use up 67 percent more water.

China holds the title for pumping out the most energy from plants that fall into this category, but right on its heels is the U.S., which accounts for more than one-fifth of the power generation from such facilities, according to a new report from the Smith School of Enterprise and the Environment at the University of Oxford. Seventy-three percent of America’s coal energy comes from subcritical plants.

The report also determined that of the 100 global companies with the greatest stake in these highly polluting subcritical plants, 29 are in the United States. AES Corporation, Southern Company, Duke Energy, NRG Energy, American Electric Power Co. and Berkshire Hathaway Energy make up six of the 20 top SCPS-holding companies in the world.

The report argues that in order to keep global temperatures from rising more than 2 degrees C over what they were in preindustrial times — the aim of a potential international deal to be sealed at climate talks in Paris later this year — “it is necessary to close a quarter or 290 gigawatts (GW) of subcritical generation worldwide by 2020.”

One study in Nature in January estimated that reaching the two-degree target would require keeping 92 percent of country’s coal reserves completely untouched. Short of that, closing old, over-polluting, underperforming coal plants is a good preliminary move.