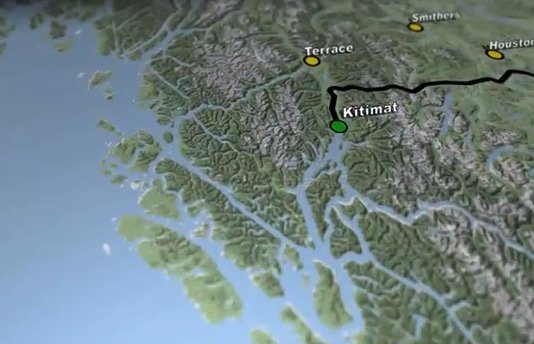 Oil in Eden: The Battle to Protect Canada’s Pacific Coast

t’s one of the last bastions of Canadian wilderness: the Great Bear Rainforest, on BC’s north and central Pacific coast. Home to humpback whales, wild salmon, wolves, grizzlies, and the legendary spirit bear – this spectacular place is now threatened by a proposal from Enbridge to bring an oil pipeline and supertankers to this fragile and rugged coast. The plan is to pump over half a million barrels a day of unrefined bitumen from the Alberta Tar Sands over the Rockies, through the heartland of BC – crossing a thousand rivers and streams in the process – to the Port of Kitimat, in the heart of the Great Bear Rainforest. From there, supertankers would ply the rough and dangerous waters of the BC coast en route to Asia and the United States. Dubbed the Northern Gateway Pipeline, the project is of concern for three main reasons: 1. It would facilitate the expansion of the Tar Sands, hooking emerging Asian economies on the world’s dirtiest oil; 2. the risks from the pipeline itself; 3. the danger of introducing oil supertankers for the first time to this part of the BC coast.