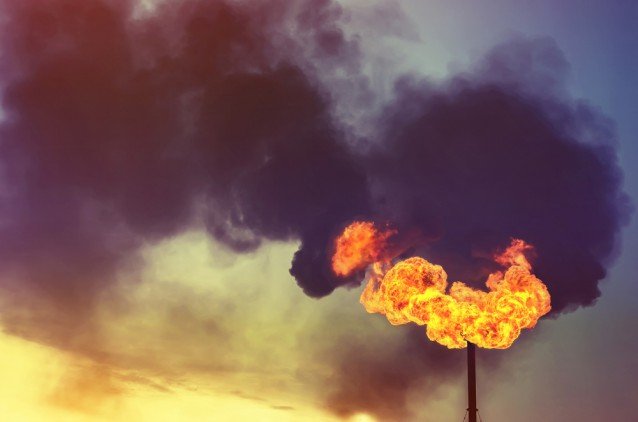 In March, Secretary of the Interior Sally Jewell cited a methane gas plume the size of Delaware hovering over the Four Corners area in Northwest New Mexico as evidence that the Interior Department needs to cut “wasted gas that results from venting and flaring during oil and gas operations.”

This methane hot spot, which is located above an area that contains more than 40,000 wells, arises primarily from leaks in natural gas production and processing equipment spanning a large area of federal lands. While it may be the most visible instance of this issue, it is far from the only instance of methane — a powerful greenhouse gas that traps up to 34 times as much heat as carbon dioxide over the course of a century — being emitted into the atmosphere above public lands. A new report from the Government Accountability Office notes another unfortunate side effect of this inefficiency: the loss of tens of millions of taxpayer dollars each year.

The GAO has been urging the Bureau of Land Management (BLM), an Interior Department agency, to cut methane emissions via flared or vented gas since at least 2010, when the government office found that 40 percent of this methane could be economically captured and sold. According to the 2010 report, “such reductions could increase federal royalty payments by about $23 million annually and reduce greenhouse gas emissions by an amount equivalent to about 16.5 million metric tons of CO2 — the annual emissions equivalent of 3.1 million cars.”

In the intervening half decade, the situation has only been exacerbated by the proliferation of new extraction techniques such as hydraulic fracturing. Last May, an Associated Press review of government records found that the BLM, which manages oil and gas development on federal and Native Americans lands, had been “overwhelmed” by the boom in fracking.

The new GAO report found that the Interior Department has made “considerable progress” since 2009 but has failed to implement a number of key recommendations included in the 2010 report. For instance, it found that in 2013 the BLM failed to complete production inspections on 19 percent of the wells it considered high risk.

According to the GAO report, oil and gas leased on federal lands and waters accounted for almost $48 billion in royalty revenues between 2009 and 2013.

Three Democratic lawmakers sent a letter to Jewell this week in response to the new GAO report. In it, they express concern over the lack of regulation on federal oil and gas leases and encourage action to protect the environment and “ensure fair returns for taxpayers.” Senator Ron Wyden (D-OR), Rep. Peter DeFazio (D-OR), and Raúl M. Grijalva (D-AZ) write in the letter that they went new regulations to “restrict the practice of venting and flaring” with Sen. Wyden saying that “venting and flaring natural gas from these wells hurts the environment and speeds up global warming, and it shortchanges the taxpayers.”

In a statement to the Associated Press, the Interior Department mostly agreed with the GAO’s recent findings and re-emphasized its responsibility to protect the environment and collect taxpayer revenue. As with many environmental oversight and regulatory issues, the agency feels funding to be insufficient, with David Haines, deputy assistant secretary for the Interior Department, saying that the money Obama requested in his budget for well inspections “would provide much needed resources to support BLM’s cradle to grave responsibilities for wells.”

Interior Department spokeswoman Jessica Kershaw said the agency is updating their “decades-old standards to encourage the kind of infrastructure and technology that many companies operating in the Bakken and Permian basins have demonstrated can reduce harmful emissions and capture the natural gas.”

According to a 2014 report by the Center For American Progress, unconventional natural gas production and processing on federal lands and waters, including offshore drilling, may have generated as much as 3.7 million metric tons of methane in 2012. These fugitive methane emissions are notoriously hard to measure, and improving processes for data collection and synthesis are a primary aspect of the Interior Department’s responsibility on the matter.