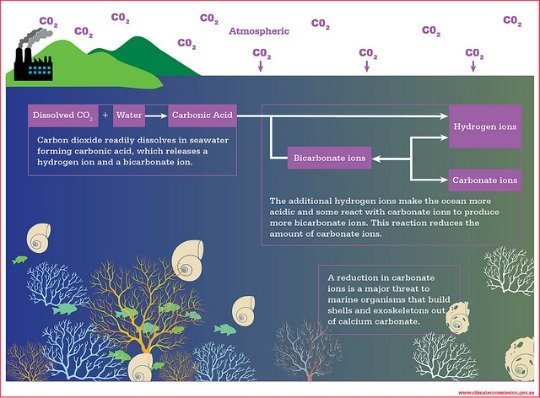 Scientists have documented how ocean acidification, sometimes referred to as climate change’s “evil twin,” is already taking a toll on an essential part of the marine food chain in an area off the U.S. northwest coast, and with runaway greenhouse gas emissions continuing, it looks like the problem is only set to worsen.

As oceans have absorbed increasing amounts of CO2, they’ve become more acid, and that means the shells of pteropods, small, free-swimming marine snails, are dissolving — a change the researchers hadn’t expected to see for years.

In samples they took from northern Washington to central California, 53 percent of the pteropods had severely dissolved shells.

“Our findings are the first evidence that a large fraction of the West Coast pteropod population is being affected by ocean acidification,” stated lead author Nina Bednarsek, Ph.D., of NOAA’s Pacific Marine Environmental Laboratory in Seattle. “Dissolving coastal pteropod shells point to the need to study how acidification may be affecting the larger marine ecosystem.”

The tiny snails, which are about one-eighth to one-half inch in length, are a food source for pink salmon, mackerel and herring, so a plummet in the pteropod population will have far-reaching effects.

The team of NOAA-led researchers warns that the incidence of severe pteropod shell dissolution owing to anthropogenic OA has doubled in near shore habitats since pre-industrial conditions across this region and is on track to triple by 2050.

Study co-author William Peterson, Ph.D., an oceanographer at NOAA’s Northwest Fisheries Science Center, adds that the effect to the pteropds shells in the coastal region comes “several decades” ahead of when they expected.

Last year scientists presented their findings of the “unprecedented” rate of ocean acidification while at the UN climate talks in Warsaw, noting that pteropods in the Southern Ocean were already corroding, which would have a “cascading impact on the whole food chain.”

“Acidification of our oceans may impact marine ecosystems in a way that threatens the sustainability of the marine resources we depend on,” stated Libby Jewett, Director of the NOAA Ocean Acidification Program. “Research on the progression and impacts of ocean acidification is vital to understanding the consequences of our burning of fossil fuels.”

The findings were published in the Proceedings of the Royal Society B.