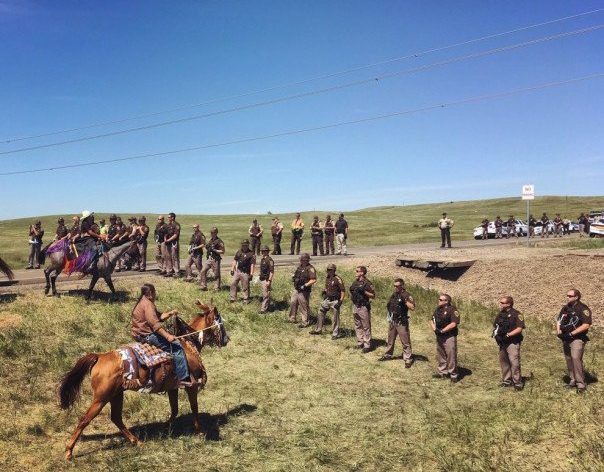 Occupying the Prairie: Tensions Rise as Tribes Move to Block a Pipeline

NEAR CANNON BALL, N.D. — Horseback riders, their faces streaked in yellow and black paint, led the procession out of their tepee-dotted camp. Two hundred people followed, making their daily walk a mile up a rural highway to a patch of prairie grass and excavated dirt that has become a new kind of battlefield, between a pipeline and American Indians who say it will threaten water supplies and sacred lands.

The Texas-based company building the Dakota Access pipeline, Energy Transfer Partners, calls the project a major step toward the United States’ weaning itself off foreign oil. The company says the nearly 1,170-mile buried pipeline will infuse millions of dollars into local economies and is safer than trucks and train cars that can topple and spill and crash and burn.

But the people who stood at the gates of a construction site where crews had been building an access road toward the pipeline viewed the project as a wounding intrusion onto lands where generations of their ancestors hunted bison, gathered water and were born and buried, long before treaties and fences stamped a different order onto the Plains.

People have been gathering since April, but as hundreds more poured in over the past two weeks, confrontations began rising among protesters, sheriff’s officers and construction workers with the pipeline company. Local officials are struggling to handle hundreds of demonstrators filling the roads to protest and camp out in once-empty grassland about an hour south of Bismarck, the state capital.

More than 20 people have been arrested on charges including disorderly conduct and trespassing onto the construction site. The pipeline company says it was forced to shut down construction this month after protesters threatened its workers and threw bottles and rocks at contractors’ vehicles.

Sheriff Kyle Kirchmeier of Morton County, who has led the law enforcement response, said at a news conference that he had received reports of weapons and gunshots around the demonstration, and that protesters were getting ready to throw pipe bombs at a line of officers standing between a rally and the construction site.

Leaders from the Standing Rock Sioux tribe, whose reservation lies just south of the pipeline’s path, say the protests are peaceful. Weapons, drugs and alcohol are prohibited from the protest camp. Children march in the daily demonstrations. The leaders believed the reports of pipe bombs were a misinterpretation of their calls for demonstrators to get out their wooden chanupa pipes — which have deep spiritual importance — and pass them through the crowd.

The conflict may reach a crucial moment on Wednesday in a federal court hearing. The tribe has sued to block the pipeline and plans to ask a judge in Washington to effectively halt construction.

The pipeline runs overwhelmingly along private land, but where it crosses bodies of water, federal rules come into play and federal approvals are required.

The tribe says the pipeline’s route under the Missouri River near here could threaten its water supplies if the pipeline leaks or breaks, and it says the United States Army Corps of Engineers failed to do proper cultural and historical reviews before granting federal approvals for the pipeline.
“This is our homeland,” said Phyllis Young, a member of the Standing Rock Sioux. “We are Dakota. Dakota means friend or ally. Dakota Access has taken our name.”

A protester is arrested for standing on the outer layer of barricades that separate the protest site from the police line and construction zone on Monday morning. Daniella Zalcman. Aug 15, 2016.

In legal filings, the corps rejects those claims. It says it consulted extensively with tribes, including the Standing Rock Sioux, and it says that tribe has failed to describe specific cultural sites that would be damaged by the pipeline. Energy Transfer Partners says it has the necessary state and federal permits and hopes to finish construction by the end of the year. The pipeline’s route starts in the Bakken oil fields of western North Dakota and ends in Illinois.

With the fate of the land here and this $3.7 billion project in the air, people here have decided to take action. They are occupying the prairie.

Echoing protests against the now-scuttled Keystone XL pipeline, environmental activists and other tribes from the Dakotas, the rest of the Great Plains and the Pacific Northwest have been arriving to camp in the open fields and protest near the parcel where the pipeline company has secured an agreement with the landowner to build.

The protesters sleep in tents and tepees, cook food in open-air kitchens and share stories and strategies around evening campfires. There is even a day care. At morning meetings, speakers warn parents to keep their children away from the Missouri River at sunset, and remind one another they are camped out in prayer.
“It’s a major movement in Indian country,” said CJ Clifford, a member of the Oglala Lakota, who drove up from the Pine Ridge Reservation in South Dakota. He saw the protests as part of a historical continuum reaching to Little Bighorn. This battle, he said, was being waged peacefully.

For many, the effort was about reclaiming a stake in ancestral lands that had been whittled down since the 1800s, treaty by broken treaty.

“Lands were constantly getting reduced, shaken up,” said Dave Archambault II, the tribal chairman of the Standing Rock Sioux. “I could give you a list of every wrongdoing this government did to our people. All of that is frustration pent up, and it’s being recognized.”

He added, “It’s a tipping point for our nations.”

This month, a line of sheriff’s officers retreated in the face of riders on horseback circling and yipping through the grass. (Tribal members said that the display was a Lakota gesture of introduction, and that they have no quarrel with law enforcement.)

There have been no moves so far to disband the camp or keep people from demonstrating. But Sheriff Kirchmeier told reporters that the demonstration had become an “unlawful protest,” and Gov. Jack Dalrymple, citing “public safety risks,” declared a state of emergency on Friday.
Local law enforcement officers set up a barricade on the main road leading to the pipeline site, and officials here in Morton County called a special meeting on Monday to talk about the traffic and how to handle a hundreds-strong protest that could linger for weeks or months.

At the sprawling campsite down the road from the protest site, there had been portable toilets, 500-gallon tanks of drinking water and an air-conditioned trailer with medical supplies provided by the state. But late Monday night, people at the camp said the medical trailer and water tanks had been removed, leaving them to scramble for a new water source for hundreds of people.

After a prayer ceremony at the construction site one recent afternoon, a few young men on horseback opened the gate and rode onto the land. A few days earlier they might have been arrested and accused of trespassing, but that day there were no officers to stop them.

The pipeline company said that it temporarily stopped work here this month while “law enforcement works to contain the unlawful protests,” but that construction was continuing elsewhere.

Energy Transfer Partners has sued Mr. Archambault and six other people over the protests. In a federal lawsuit filed last week, the company accused them and other protesters of blocking access to the construction site, threatening workers and trespassing onto private land.

Jon Eagle Sr., the historic preservation officer for the Standing Rock Sioux, watched from the side of the road as the young men rode into the grassy field, toward a construction floodlight and heaps of excavated dirt. He did not want the pipeline to breach this land. But he did not seem to approve of this either.